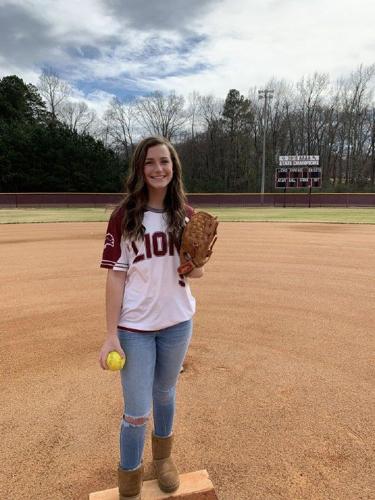 Mason Wittner/Times-GeorgianAbove: Central High School freshman phenom Karley Fuller was named the 2019 Times-Georgian All-Area Newcomer of the Year for the impact she made in the clubhouse on the diamond for the Lady Lions this fall. Below: Fuller developed into the Lady Lions' ace in the circle during her freshman campaign. She went 17-6 as a starter and posted a 1.815 ERA while recording 97 strikeouts more than 135 innings of work. 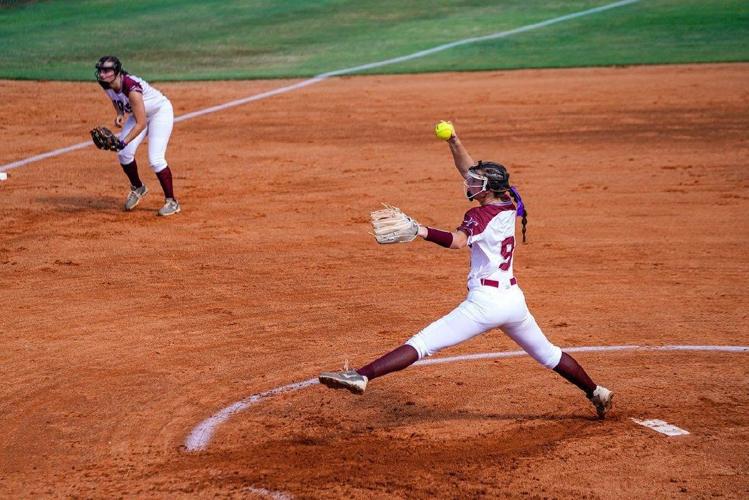 Mason Wittner/Times-GeorgianAbove: Central High School freshman phenom Karley Fuller was named the 2019 Times-Georgian All-Area Newcomer of the Year for the impact she made in the clubhouse on the diamond for the Lady Lions this fall. Below: Fuller developed into the Lady Lions' ace in the circle during her freshman campaign. She went 17-6 as a starter and posted a 1.815 ERA while recording 97 strikeouts more than 135 innings of work.

The freshman right-hander from Central High School developed into the Lady Lions’ ace in the circle in her first season at the varsity level this fall. She went 17-6 as a starter while posting a 1.815 ERA and recorded 97 strikeouts over 135 innings of work. She was perhaps at her strongest in Region 5-AAAA play, where she went 12-1 with a 0.921 ERA and 67 strikeouts en route to earning a first-team All-Region selection.

Fuller never played like a freshman. She rose above all expectations set both by and for her, and took the area by storm. Consequently, she rightfully earned her spot as the 2019 Times-Georgian All-Area Newcomer of the Year.

Fuller gave credit to Central’s top-of-the-line coaching staff and reliable group of teammates for the role each of them have played in her recent success.

"It meant so much to find out all the hard work that I've put in has finally paid off," Fuller said. "I never expected to have this good of a season, but having the girls and coaching staff behind me definitely helped me get through this season. I'm really thankful for the girls, especially because they had my back on the field and off the field. And I always knew that even if I did mess up, they were always there.

“And the coaching staff working with me and talking to me before any big game, they helped so much; I can't even explain it. So, it means a lot. And having my family support me."

In addition to heeding the words of motivation that came out of her coaches’ moths before any contest, Fuller and her teammates had other methods of preparation. Two things, in particular, held sentimental value and stuck with the Lady Lions until the end of the 2019 softball season.

"Every game there's a hairstyle that we all did," she said. "We did bubbles in our hair, which is a ponytail and my teammates would understand. But that was a superstition, my hairstyle, and then wearing the same purple bow for Breanna Pittman's dad that represented his cancer. He passed away in the middle of the season, but that was definitely our superstition, I think, was playing for him. We had to do something for him before every game, and if not, we just didn't play good."

With bubbles and bows in her hair, Fuller helped lead the Lady Lions to a region title and a sweep of Blessed Trinity and Columbus in the first two rounds of the Class AAAA state playoffs to punch their ticket to the state tournament in Columbus for the first time since 2016. It was, of course, Fuller's first experience on the grand stage.

"It was fun. We all got to experience together, and that made it so special because we all got to hang out at night in our hotel rooms," Fuller said of the trip. "And even though the outcome wasn't as good, because we wanted to win, that made me learn a lot and know what I need to do better next season."

Though the state tournament was a first for the young athlete, she lives for big moments. Those times when her adrenaline is racing and everything is one line the are Fuller’s favorite part of playing the game she loves.

"I'd much rather lose a game in an intense situation and know that we all played our hardest than to win a game 12-0 or run-rule them, because it's just the feeling that I get," Fuller revealed. "My heart starts beating really fast, I get butterflies. That's what I live for is to have those moments."

Central head coach Dave McKenna says that moments like that were one of the things that had both him and his coaching staff a little nervous at first. However, throughout the region championship series, they watched her step up in crucial situations and play through them with great resolve.

"That was one thing the coaching staff was a little bit nervous about was once we got into the region championship series. We kind of wanted to see how she'd react in that situation, and she did," McKenna explained. "She stepped up and did everything we asked her and more, and that continued in the first and second round."

The region championship series wasn't the only time in which McKenna noticed Fuller's ability to handle high-pressure situations. He noticed it a number of times throughout the season, as well.

Asked if there were every times he found himself sitting back and watching with wonder at the elite performance from a freshman, McKenna quickly affirmed and noted that “there were several situations.”

"Specifically the championship series, going in and going against an All-State pitcher in LaGrange's pitcher. It was fun to see them battle back and forth when you've got two high-level pitchers going at it. That's kind of when the coaching staff was like, 'Wow, she is the real deal,’” he added. “We knew she was going to be good, but she's better than we anticipated her being as a freshman. As long as she keeps improving year in and year out, she's got a bright future ahead of her."

McKenna is undoubtedly looking forward to the next three years he has with his talent in the circle, and Fuller has already thought of a few goals she wants to reach for along the way.

One thing she hopes to do is win a state championship each of her last three years as a Lady Lion. Outside of that, she wants to build stronger bonds with her team and her coaches, learn more about the game, herself and her future.

"I just really want to see her get more stronger and more explosive, and I think weight training class will do that. Maybe gain a little velocity on her pitches will help her and help her change up that much more," McKenna said.

Overall, he just doesn't want to see her get comfortable.

"And just not get complacent. Don't be satisfied with the year she had this year. Try to improve every year from her until she graduates and then on into college, because if she continues to do what she does, she's going to play at a pretty decent college somewhere in the country,” he said.

Right now, Fuller is playing on the girls' basketball team for Central High School. Between now and next fall, her focus will remain on the same exact things her coach has in mind. She aims to get stronger in the weight room, tick up the velocity on her patchers, work on spins and anything else that could possibly give her a competitive edge on the diamond.

Fuller is excited for what's the come, but she humbly thanked everyone who had anything to do with what she proved this softball season.

"I just want to say thank you to the coaches and my teammates, who are now sisters to me. I'm really going to miss all the seniors because they played a huge role this year in my success," she concluded.