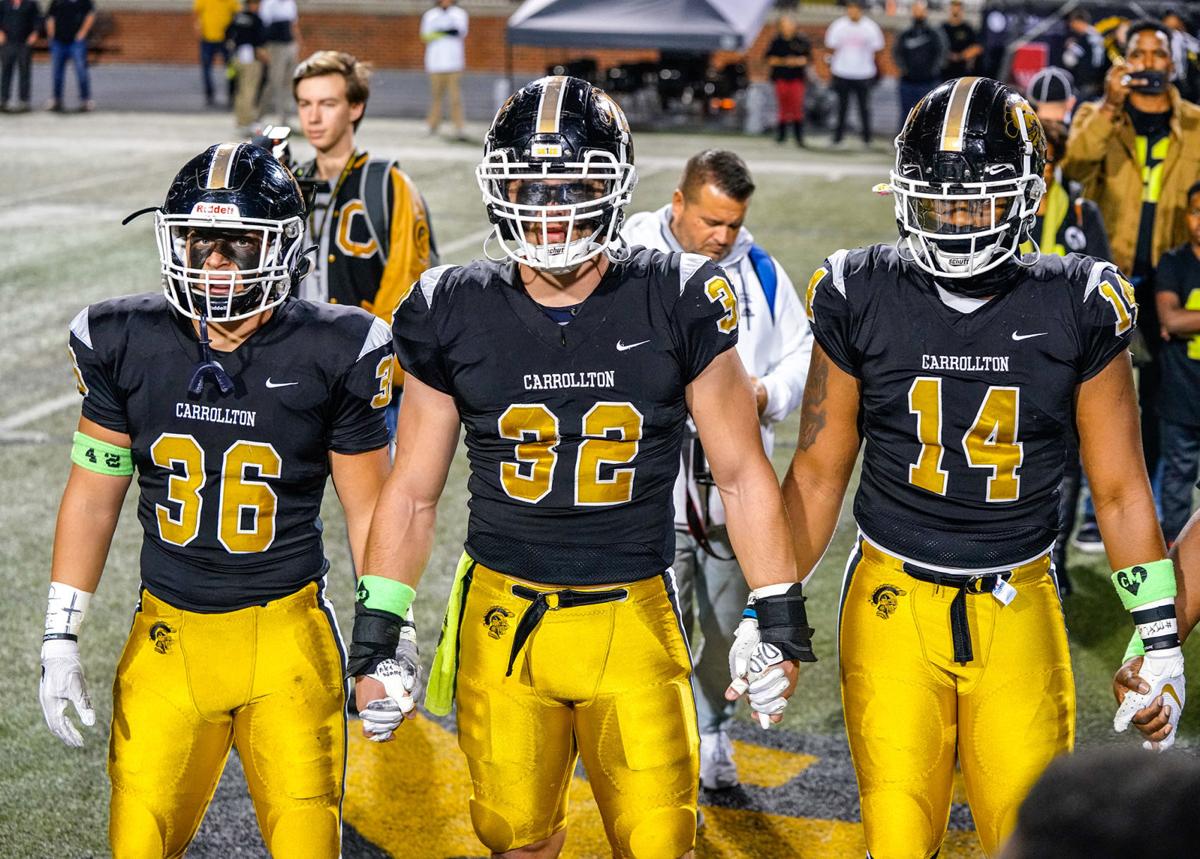 Carrollton linebacker Chaz Chambliss, center, walks to midfield with teammates for the coin toss against Buford last year. Chambliss is one of four Trojans on the watch list for the Sports Illustrated All-American team. 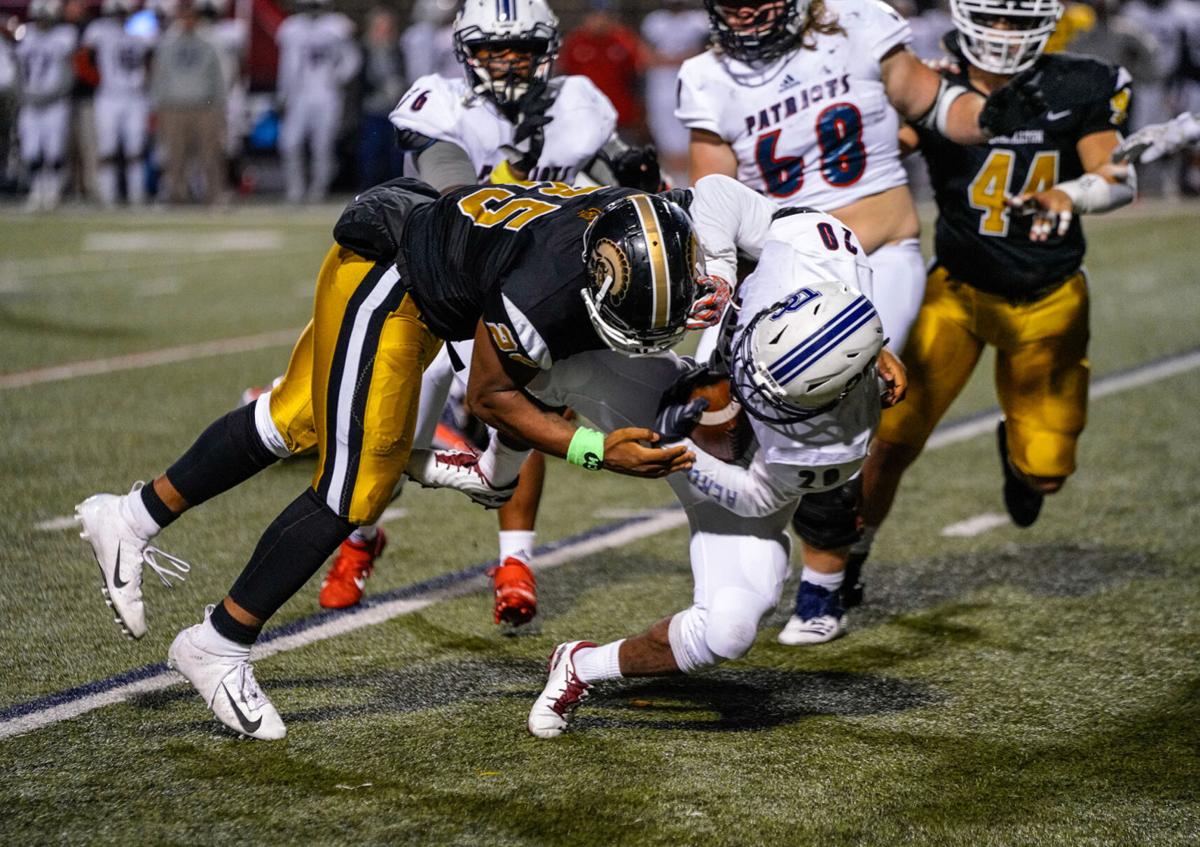 Trojan junior Jared Nedd rams a Patriot player to the ground during a Nov. 15, 2019, game.

Carrollton linebacker Chaz Chambliss, center, walks to midfield with teammates for the coin toss against Buford last year. Chambliss is one of four Trojans on the watch list for the Sports Illustrated All-American team.

Trojan junior Jared Nedd rams a Patriot player to the ground during a Nov. 15, 2019, game.

Four Carrollton High School football players are on the watch list for the Sports Illustrated All-American team for 2020.

The Trojans’ four standout student-athletes were among 84 Georgia high school athletes who were chosen on July 15, according to a release issued by the magazine.

In all, 1,000 players from across the nation made this year’s watch list. Georgia ranks third among states with the most SI All-American candidates behind Florida (142) and Texas (130).

Those who made the list were Chaz Chambliss, Chief Borders, Jared Nedd, and Khristian Zachary.

“With that publicity comes some responsibility and accountability,” said Carrollton head football coach Sean Calhoun. “We’re going to hold them to a higher standard. They need to be leaders and real good examples.”

Calhoun explained how these nominations help his players and the Trojan brand as a whole.

“Any time you can get publicity, especially in such a positive manner like this, it’s only going to shine for the football program and for those four kids individually,” he said. “Everybody knows Sports Illustrated, so it’s really an honor.”

Chambliss, a 6-foot-3, 240-pound linebacker, enters his senior year committed to the University of Georgia. Chambliss split time at strong-side defensive end and linebacker last fall, recording 25.5 tackles for loss and 15 sacks. Listed as a four-star prospect by several recruiting outlets, he’s ranked the nation’s No. 17 outside linebacker and No. 23 overall Georgia prospect, according to the 247Sports Composite rankings ‪on Thursday evening.

“Chambliss’ future is as an edge rusher. The 4.4 shuttle speed is evident with everything he does,” SI noted about Chambliss on his profile page. “He may prefer to play off-ball linebacker, but is the kind of kid that will do whatever you ask, and do it at 110%. Son of a drill sergeant.”

Borders, the Trojans’ most recent transfer, is a 6-foot-4, 230-pound linebacker who begins the season verbally committed to the University of Florida. The 4.0 GPA honor student finished his junior campaign at McEachern High School with 74 tackles, 10 tackles for loss, one sack, one pick and completed two passes. 247Sports Composite lists the four-star prospect as the nation’s No. 18 outside linebacker and No. 25 overall Georgia prospect.

The prospect report for Borders says that “at the very least, he’s shown the willingness to be a difference-maker on your special teams’ units, and do so with immense effort and intensity.”

Nedd, who has committed to Memphis State University, is a 6-foot, 225-pound linebacker who registered 88 total tackles, 20.5 tackles for loss, and eight sacks at CHS last season. He’s tallied 240 total tackles in his three seasons. The three-star prospect is listed as the nation’s No. 67 inside linebacker and No.129 overall Georgia prospect by 247Sports Composite rankings.

“Nedd is a downhill, fast-flow linebacker with old school vibes in the box,” said his prospect report. “He is broad and muscular and hits like it. Factor in some enforcer traits at the point along with a college body and Nedd won’t sit long at the next level.”

Zachary, a 6-foot-3, 245-pound defensive end, was ineligible to play with the Trojans last season after transferring from Landmark Christian School. However, the senior Trojan was invited in December of 2019 to the Georgia Elite Classic, an all-star competition for football athletes in Georgia, where he was named MVP of the Class of 2021 game. The three-star prospect is ranked as the nation’s No. 26 weak side defensive end and No. 29 overall Georgia prospect, according to the 247Sports Composite rankings.

“Zachary is one of the most well-rounded defensive ends in the class of 2021,” SIAA’s prospect report said. “Surefire multi-year starter for Power-5 program, with NFL upside.”

Carrollton is scheduled to play a scrimmage on Friday, Aug. 21, and open their season against Cedartown in the Corky Kell Classic on Friday, Sept. 4.