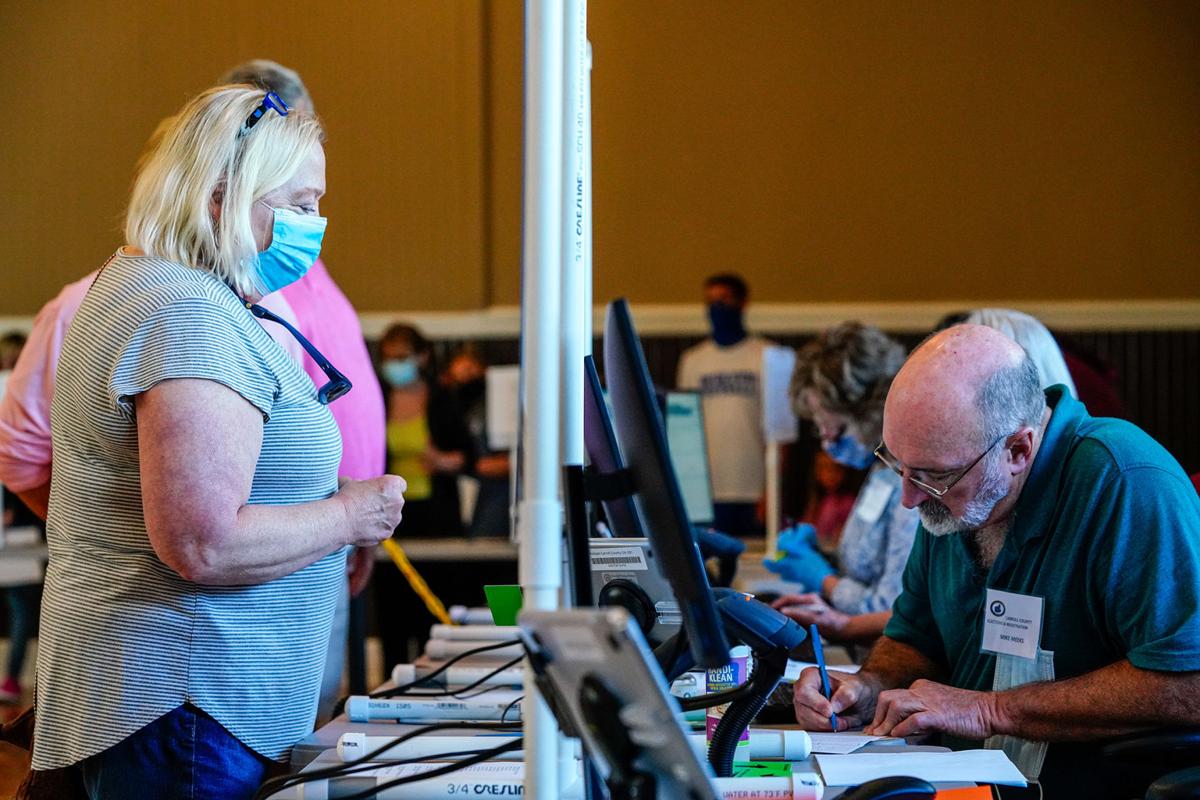 Mike Meeks, an employee of Carroll County Elections & Registrations, signs in a patron for early voting Monday at the Stallings Community Center in Carrollton. 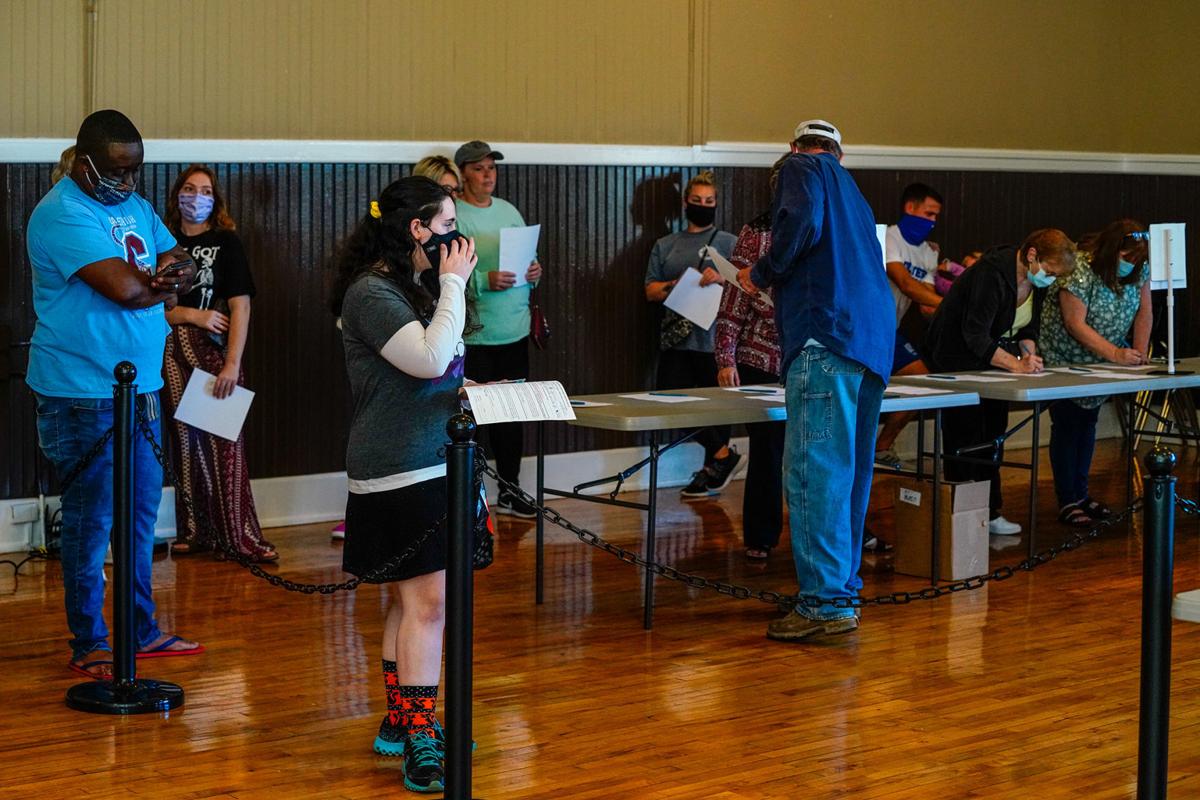 People wait in line to cast their ballots for early voting Monday at the Stallings Community Center in Carrollton. 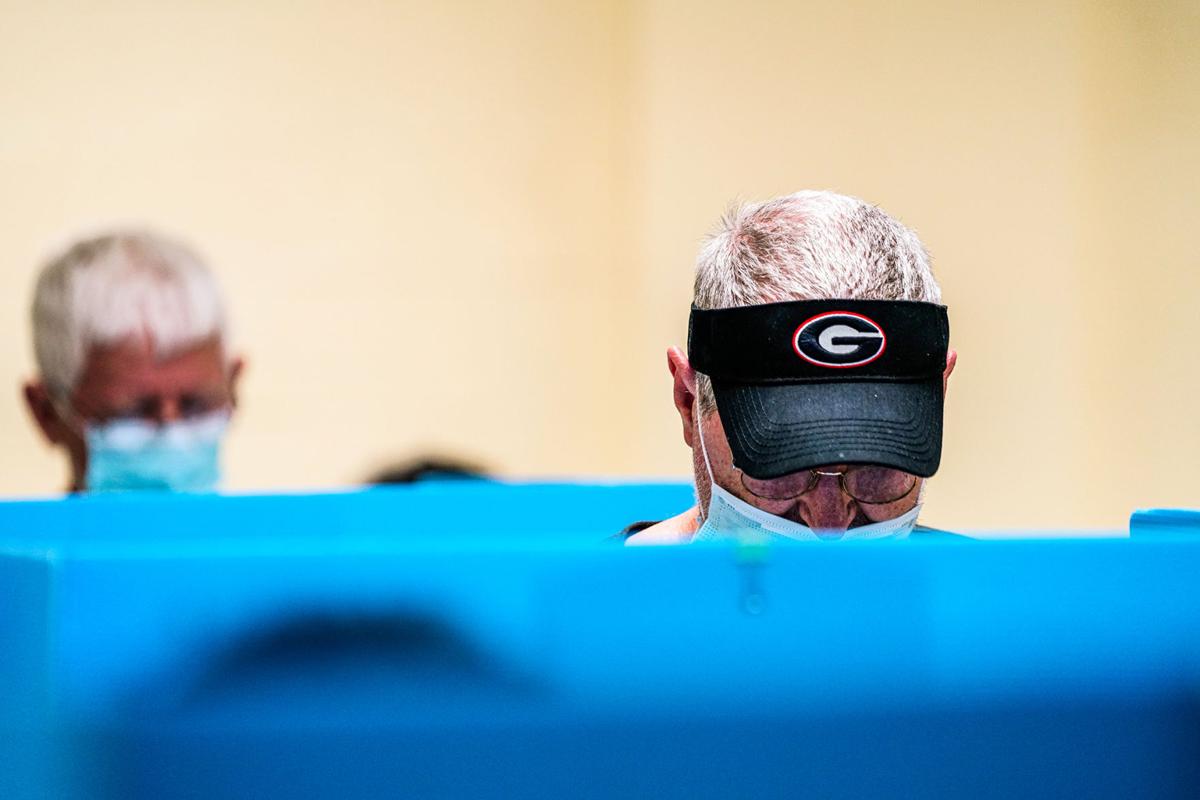 A man casts his ballot Monday at the Elections Office in downtown Carrollton.

Mike Meeks, an employee of Carroll County Elections & Registrations, signs in a patron for early voting Monday at the Stallings Community Center in Carrollton.

People wait in line to cast their ballots for early voting Monday at the Stallings Community Center in Carrollton.

A man casts his ballot Monday at the Elections Office in downtown Carrollton.

With less than two weeks left until Election Day on Nov. 3, almost one out of every four registered voters in Carroll have either voted in person or by completing and returning an absentee ballot.

Last week, there were hours-long waits across Georgia with record numbers of voters lining up to cast their ballots in person. Some voters in neighboring Douglas County reported waited in lines for at least seven hours at the courthouse, and one reported waiting five hours early last week.

But Carroll County Elections Supervisor Greg Rigby said he did not see the same situation here in Carroll. Several county residents reported on social media either waiting for 15 to 20 minutes or having no wait before voting.

However, Rigby said the first week of advanced voting was met with challenges because each voter was waiting for five minutes for their ballots to be electronically processed. He said this problem was not fixed until Thursday.

“The first part of last week was totally screwed up,” Rigby said. “There were 50,000 computers trying to connect to a system that was built for 25,000.”

He said that 12,413 voters have already cast their ballots in person at either the county elections office, 423 College St., or the Stallings Center, 118 S. White St.

This means that more than half of the voters who cast their ballots early during the three-week advance voting period of 2016 have already voted this year. There are also about 30,000 more registered voters this year than in the previous presidential election.

The Powell Park Recreation Center in Villa Rica at 524 Leslie Drive will open for early voting Oct. 26. Residents can also vote at the elections office on Saturday, Oct. 24 from 9 a.m. to 4 p.m.

Election workers could also begin opening and scanning absentee ballots on Monday under a new Georgia rule that was passed in August by the State Election Board. This rule allows county election officials to start processing these ballots 15 days before Election Day.

But the rule also forbids counting absentee ballots until the polls close on Nov. 3 at 7 p.m. Scanned votes will be stored in the memory of optical scanning computers, the same as the votes cast in-person during early voting.

This will help election officials such as Rigby manage unprecedented levels of remote voters during the coronavirus pandemic. Rigby said more than 7,250 absentee ballots have been filled out and returned to the Carroll elections office in addition to 60 overseas ballots from military service personnel.

Election results in close races might not be known for days because of the time it takes to count every vote. State law gives county officials until Nov. 13 — 10 days after Election Day — to certify the election. Raffensperger then has until Nov. 20 to finalize the results.

Carroll residents have until Oct. 30 to request an absentee ballot online at ballotrequest.sos.ga.gov or by filling out a form on the secretary of state’s website. Completed ballots must be received by county elections officials by 7 p.m. on Nov. 3 to be counted, and residents can use the Ballot Trax website to track their ballots.

There are at least two drop-off boxes in Carroll, including one at the elections office and a new box for Villa Rica residents in the drive-thru of the city’s customer service building behind City Hall, 42 Community Square Boulevard.