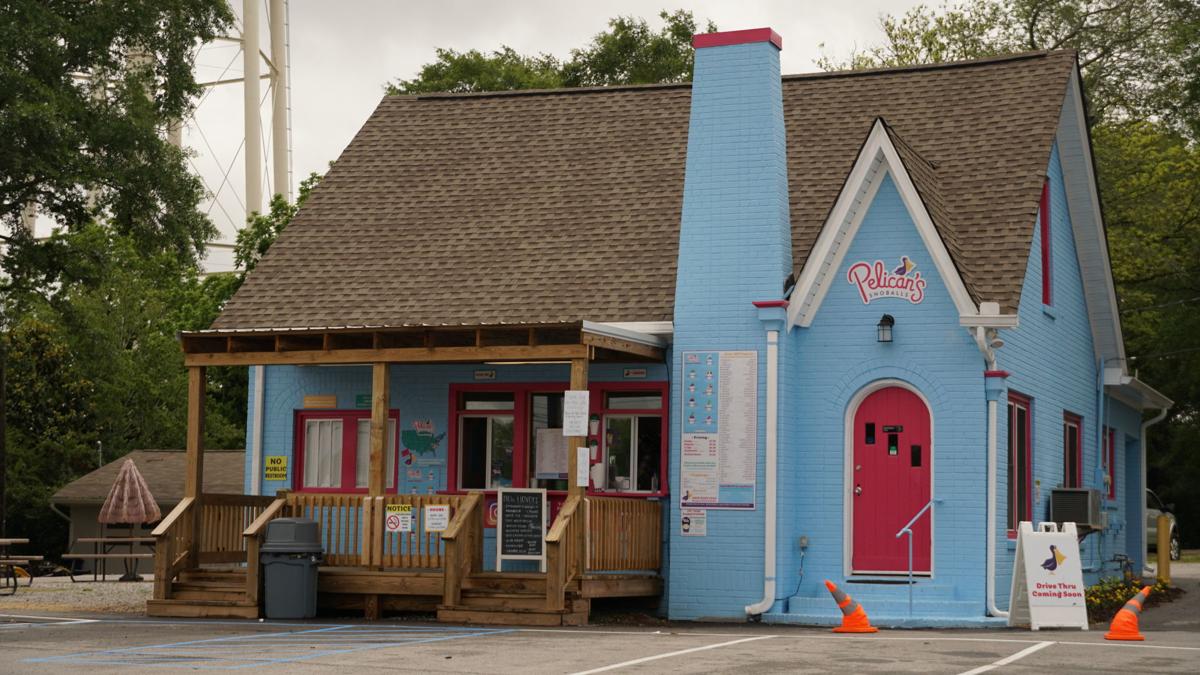 Pelican’s SnoBalls, 401 Bankhead Highway, is painted pink and blue, which the city says violates a section of the town’s development ordinance. 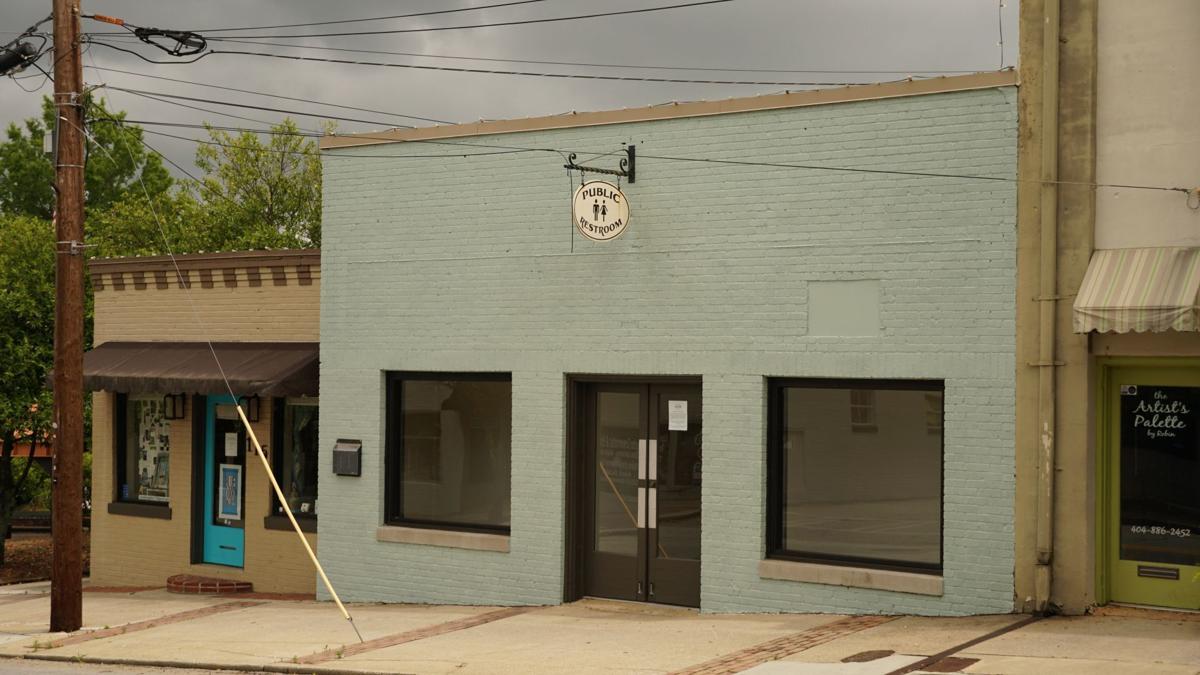 The building containing public restrooms on Rome Street is painted a shade that some have described as a variety of periwinkle. 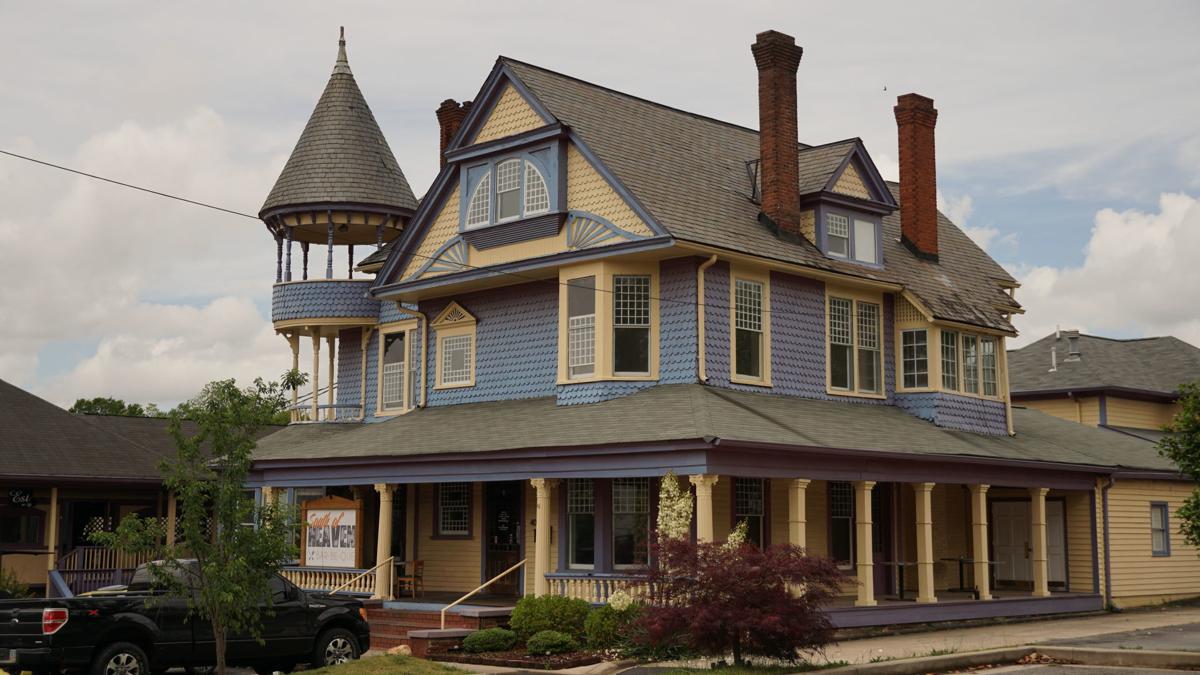 The Maple Street Mansion was built in 1890 and was painted in a purple and yellow paint scheme appropriate for a house of the Victorian era.

Pelican’s SnoBalls, 401 Bankhead Highway, is painted pink and blue, which the city says violates a section of the town’s development ordinance.

The building containing public restrooms on Rome Street is painted a shade that some have described as a variety of periwinkle.

The Maple Street Mansion was built in 1890 and was painted in a purple and yellow paint scheme appropriate for a house of the Victorian era.

A Carrollton businessman is clashing with the city over the color of a snow cone business on Bankhead Highway.

Dr. Brent Harris owns the building at 401 Bankhead Highway where Pelican’s SnoBalls exists. The Gastonia, North Carolina-based business has locations in 15 states, including one in Douglasville.

In November 2019, Harris was issued a citation by the city when the business opened in the building because it is painted pink and blue instead of the hues required by the city’s development ordinance.

The rules say that new businesses should be painted using “earth tones” or neutral colors. Harris said pink and blue are Pelican’s corporate colors and added he asked city officials for the legal definitions of earth tones and neutral colors after the citation was issued.

But he said he did not get a response from city officials or the city’s building inspector, Kyle Shepard.

He is scheduled to appear in the Carrollton Municipal Court on June 8 at 10:30 a.m. to state his case. He claimed in an email to the Times-Georgian that the city was suing him, but a Facebook post by the city on Sunday denied the existence of a lawsuit and said the business design rules have been in place since 2007. A Change.org petition also claims the city is suing Harris over the building colors.

The city’s post also claimed an advanced notification was issued to the business in Fall 2019 when crews “began painting the building a color that is not permitted in the development ordinance.”

The ordinance was established in 2007 due to “ongoing complaints about outlandish colors from some businesses such as title pawns and tattoo shops,” according to the city’s Facebook post.

“Hundreds of businesses over the years have complied with this ordinance and have effectively incorporated corporate colors within the guidelines,” the post said. “Dr. Harris is not exempt from the rules the rest of the community has to follow.”

The situation has created a debate on social media over the city’s development ordinance and its rules on building colors.

The city’s post had received more than 1,100 comments as of Monday afternoon, many from individuals who called the city’s potential actions an “overreach” of power. Some residents questioned why other buildings in the city are not painted earth or neutral colors, such as the Maple Street Mansion and the public bathrooms building on Rome Street.

The Mansion, which is a Victorian building built by L.C. Mandeville in 1890 at 401 Maple St., is painted purple and yellow, which are appropriate for a Victorian era residence. The public bathrooms downtown near Adamson Square is painted in a tone that some would describe as periwinkle.

Several sections of the city’s ordinances say that industrial development and commercial businesses in the Lake Carroll Village and Maple Street Overlay districts must adhere to design standards, including the exterior colors being earth tones or neutral. Only 25%% of the building can have brighter colors.

This requirement and other design standards only apply if the building is accessible to the public. Warehouses and other businesses that do not have offices can be waived from the rules, according to the ordinance.

The Bankhead Highway corridor is also known as the Lake Carroll Village Overlay district, which was established in March 2018 by the city’s mayor and council. The purpose of overlay districts is to provide a means of modifying the site design requirements that are otherwise applicable to the underlying zoning areas.

The establishment of this district “established design standards and sign regulations for the new corridor in order to foster and promote the development, redevelopment and beautification of the corridor.”

A controversial figure in the city, Harris has previously criticized the Bankhead Highway beautification project because he said the “road diet,” or plan to remove two lanes from the five-lane thoroughfare, would slow down traffic along the corridor.

A Change.org petition called “Save Pelican’s SnoBalls of Carrollton” was created by the Carrollton Bankhead Business Community, and the petition had more than 9,000 signatures as of Monday at 5 p.m.

Harris created another petition on the website to raise money for his legal fund with a goal of $5,000. More than $1,000 has been raised as of 5 p.m. on Monday afternoon.

The debate about how much control a local government can have on design standards is similar to the controversy surrounding a piece of state legislation that would prevent cities and counties from setting design restrictions on homes.

House Bill 302, sponsored by Rep. Vance Smith, R-Pine Mountain, failed to make it out of the House during the 2019 legislative session but was revived during the current session.

The bill, which was known in the Senate as SB 172, would prevent Georgia’s 538 cities and 159 counties from setting their own design standards and building codes for single-family or two-family residential dwellings.

Officials in several cities and counties across the state opposed the legislation because they said it would take regulating power away from local governments. The Georgia Municipal Association and the Association of County Commissioners of Georgia also opposed the bill. The bill is favored by those in home building and real estate industries, such as the Greater Atlanta Homebuilders Association.

As of February 26, the bill has not left the House, but state lawmakers are hoping to finish the 2020 legislative session starting on June 11. The session, however, is nearly over.