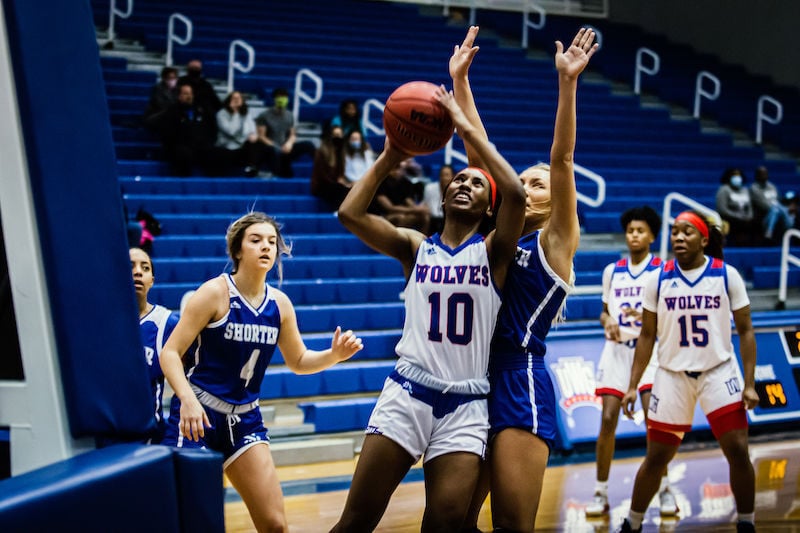 Sophomore guard Lanee’ Edwards scored 17 points in the first half during the Shorter game. 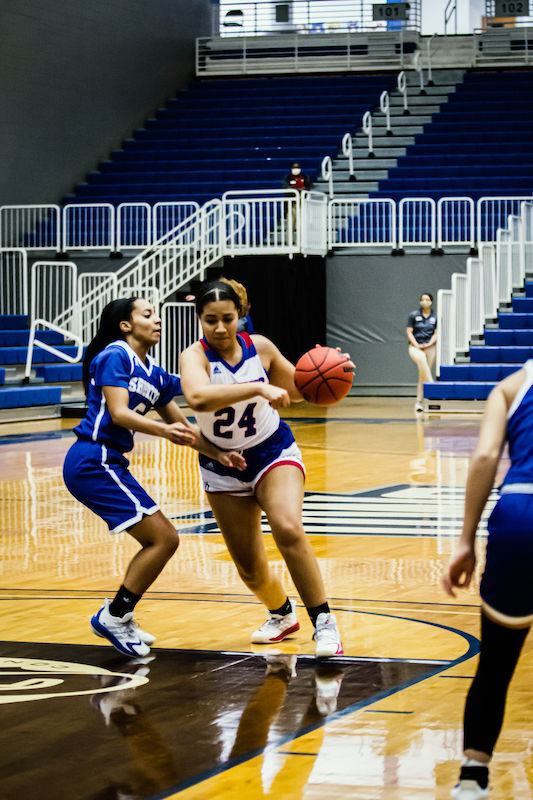 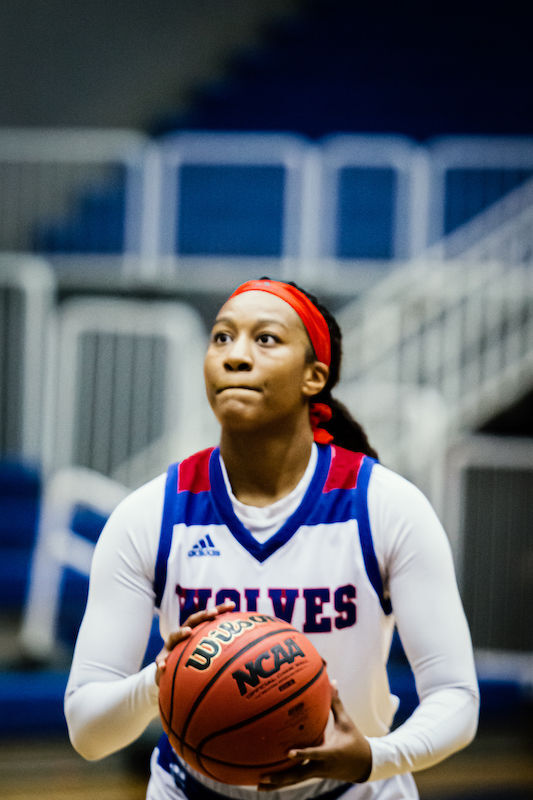 Sophomore guard Lanee’ Edwards scored 17 points in the first half during the Shorter game.

A spirited effort from the University of West Georgia women’s basketball team completed a Gulf South Conference sweep of Shorter on Sunday at The Coliseum.

The Wolves used a sizzling second quarter showing to erupt for 35 points and a 55-28 halftime advantage on the way to a 91-62 victory — the second in as many days against the Lady Hawks following a 78-72 win on Saturday — to improve to 4-1 on the year.

With only eight healthy players dressed Sunday, UWG head coach Scott Groninger couldn’t have asked for more from his squad, as it dominated both ends of the court to cap off the two-game homestand.

“I was really proud. Much like the first game, it seems to be a theme with this team, we don’t get off to very good starts. We’re going to have to correct that. But I thought the second quarter we really played some good team basketball,” Groninger said. “You always look better when you make shots, and that happened.”

The tandem of senior guard Tahya Campbell and sophomore guard Lanee’ Edwards stole the show, each scoring 17 points in the first half on a combined 11-of-18 effort from the field and 6-of-11 marksmanship from beyond the arc.

For the afternoon, Campbell posted a game-high 26 points with six assists and five rebounds, while Edwards dropped in 23 points with eight rebounds. Valencia Carroll added 15 points and Zaria Bankston rounded out the double-figure scorers with 12 points. UWG freshman Aniedi Nsentip had a monster effort on the glass with a game-high 15 rebounds.

But it was Campbell and Edwards who set the tone early and often, propelling the host squad to the dominant performance on the heels of the hard-fought win just 24 hours earlier against the Lady Hawks (1-5).

Groninger was especially pleased with the defensive effort from his troops, particularly highlighting Campbell’s presence and basketball IQ on that end of the court.

“I thought Tahya Campbell was far and away the most effective player, because on offense she goes 9-of-9 from the foul line and 3-for-7, that’s all great from 3s,” Groninger said. “But the best thing she did, she drew nine fouls and at least four of those were charges. That really frustrates the other team. She basically guarded everybody and did a great job defensively and had 26 points, five rebounds, six assists. I’m really happy with that.”

The veteran UWG head man also praised Nsentip, a gutsy 5-foot-4 guard who pulled down the double-digit boards in the paint.

“Aniedi is a walk-on for us. The head coach at Jacksonville State had called. He knew somebody that knew of her. So it’s kind of one of those weird referrals, but boy she plays hard and she is really strong. She’s come in here and done nothing but work hard,” Groninger said. “You’re going to see more of that. She is really athletic and when she plays like that, she’s going to be on the floor.”

In Saturday’s victory, the Wolves got off to a slow start offensively, but turned things around in the second quarter to pull even at 30-30 at halftime. From there, they used a 13-3 run between the end of the third quarter and start of the fourth to take the lead for good and hold on down the stretch for the final six-point margin.

Carroll led four UWG players in double-figures offensively, posting 15 points on 5-of-12 shooting, including a 3-of-5 clip from downtown. The junior guard also pulled down seven rebounds with six assists, four steals and two blocks.

Edwards added 14 points for the Wolves, followed by Jayda Dooley with 13 points and CeCe Carter with 11 points, nine rebounds and four steals.

Carter sparked the Wolves’ second-quarter run, scoring all 11 of her points in the first half to jump-start the offensive attack after the slow start in the opening quarter.

“I was really proud of CeCe. She has only practiced one and a half times since the break. She’s been sick, nursing an ankle. So she really gutted it out for us,” Groninger said. “She gave us a big lift.”

Up next for the Wolves is a road trip to Cleveland, Tennessee, for a pair of games against Lee University at Paul Dana Walker Arena. Friday’s contest will tip at 6 p.m. with the final game to follow on Saturday at 2 p.m. The Lady Flames (2-1) had their series against Montevallo postponed this past weekend.

“Looking forward to the challenge of going to Lee University and try to get in there and see how well we can perform against a top, nationally-ranked team,” Groninger said.