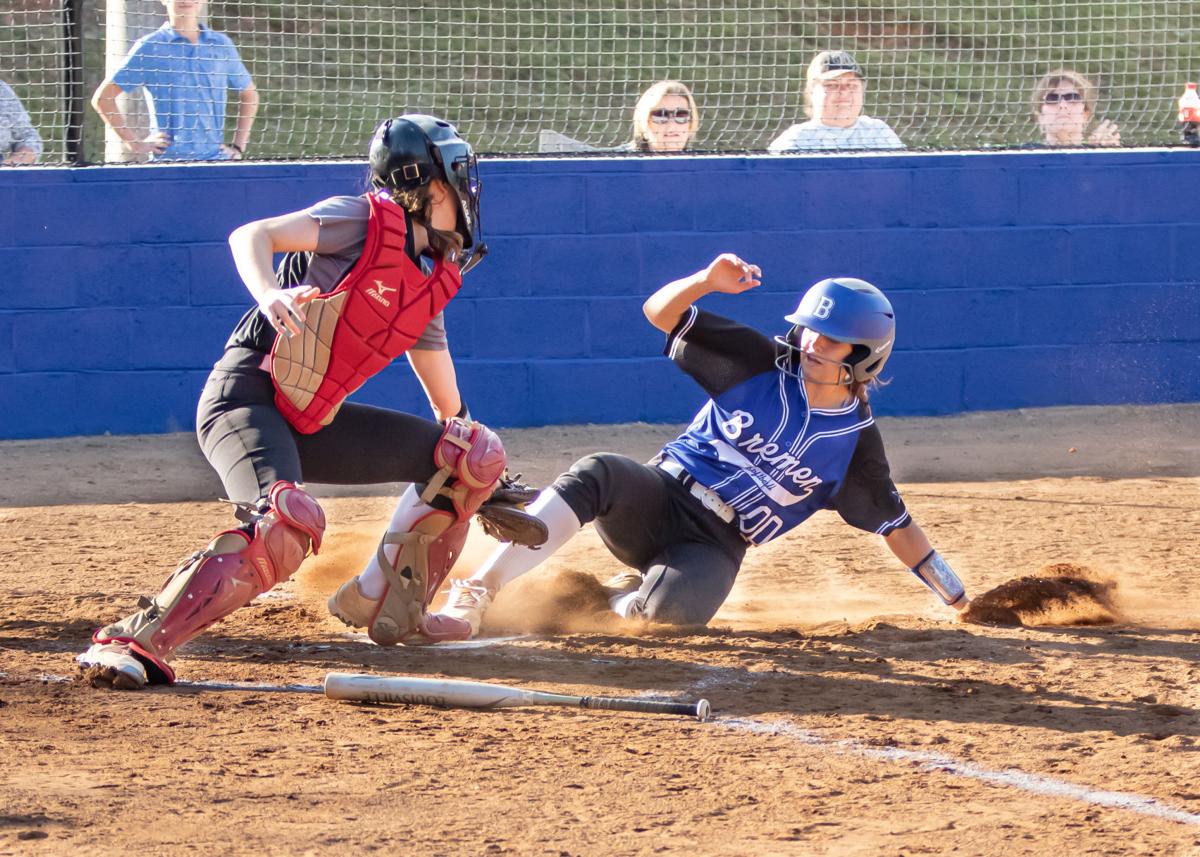 Bremen’s Zoe Cook slides in safe at home adding another run to their lead against Rabun County High School. 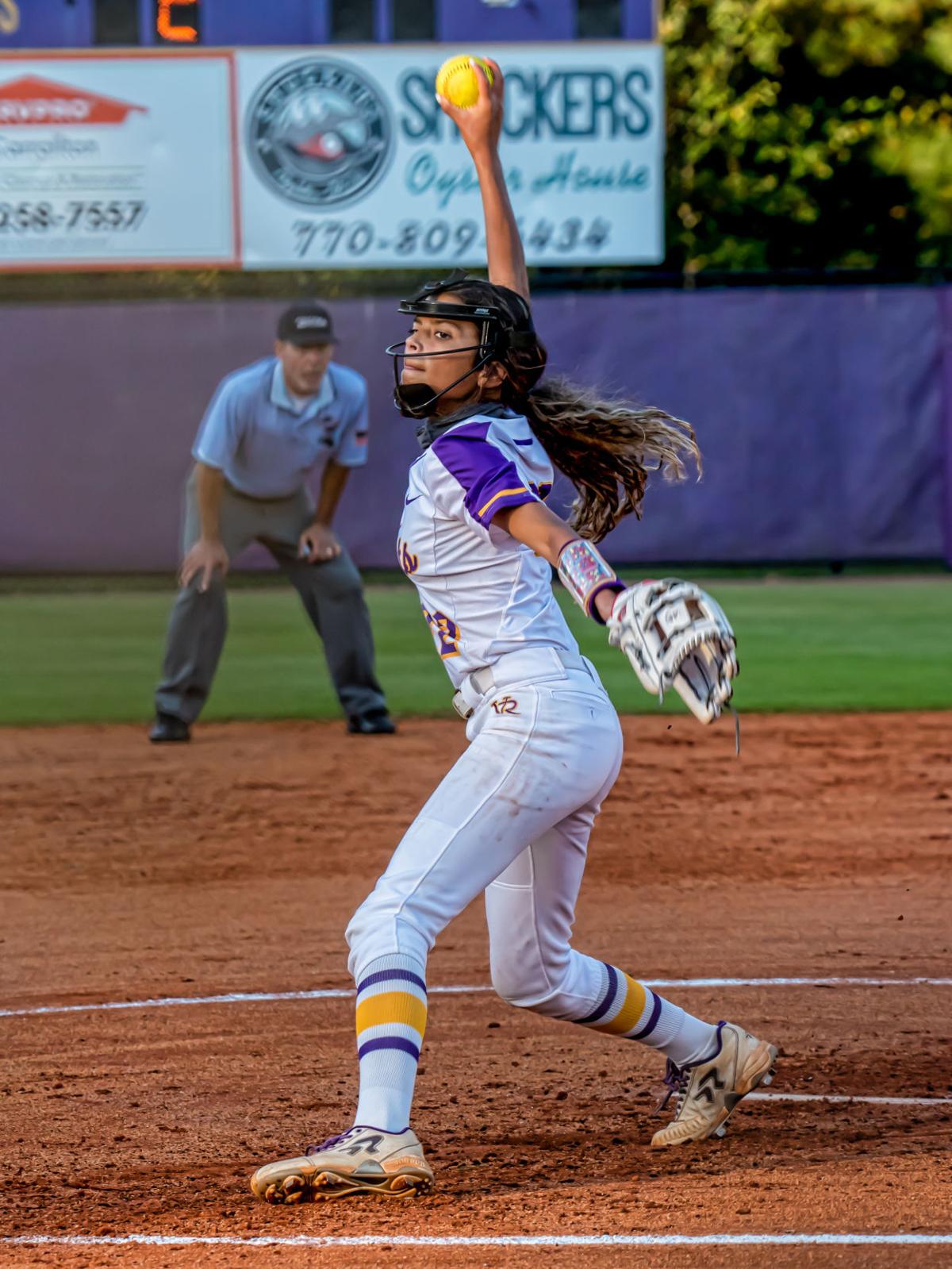 The Lady Wildcats lost the first game 9-0, won the second contest 12-7 before ending their season with a 12-3 loss.

Bremen’s Zoe Cook slides in safe at home adding another run to their lead against Rabun County High School.

The Lady Wildcats lost the first game 9-0, won the second contest 12-7 before ending their season with a 12-3 loss.

The first round of the GHSA softball tournament opened this week with Bremen, Central and Carrollton each earning sweeps to advance to the Sweet 16.

Villa Rica and Bowdon’s seasons ended with their first-round losses.

Bremen advances past Rabun County: Bremen opened play in the Class AA tournament with 13-2 and 8-0 victories over Rabun County.

In the nightcap, Caitlin Newman hit a grand slam and teammate Ella Harrod hit a homer and finished with five RBIs.

Haley also struck out four to pick up the win in the first game.

Harrod, Wester and Alexis Smith drove in two runs each in the first game.

Bremen moves on to play Chattooga in the Class AA Sweet 16 on Thursday.

Carrollton sweeps Winder-Barrow: The Lady Trojans stamped their ticket to the Class AAAAA Sweet 16 on Monday after beating Winder-Barrow, 9-5 and 10-1.

In the first game Scout Jennings homered and Kate Albertus drove in three runs heading to the victory.

Jaycie Hand picked up the win in both games finishing with a combined three strikeouts.

In the second game, Jennings drove in three runs and Kayla Harley and Maddie Mashburn drove in two each.

The Lady Trojans move on to play Creekview in the second round on Thursday.

The Lady Lions made short work out of Arabia Mountain outsourcing their opponent 35-0.

Karley Fuller struck out six in the first game and Alexis Warren had five strikeouts in the nightcap.

Chelsea Jeffers and Hayden Salter both drove in runs in the second game.

Central plays North Oconee in the second round Thursday.

Haralson County beats Elbert County: The Lady Rebels used a sweep of Elbert County on Monday to move on to the Class AA Sweet 16.

The Lady Rebels won the first game 5-1 and finished off Elbert County, 8-0, in the second game.

Morgan Martin struck out 11 in the first game and three in the second game.

The Lady Rebels spread the offensive wealth in the first game, getting homers from Martin, Mallory Garner and Abby Brown.

Haralson County will play Lovett in the second round of the Class AA tournament starting Thursday.

The Lady Eagles won the first game 8-0 and split the second contest 12-4.

In their 8-0 victory, the Eagles led 5-0 after three innings and added three more runs in the top of the fourth.

The game ended in the fifth inning by the mercy rule.

Savannah Cheeks and Anna Grace Hennesy homered for the Eagles.

Season ends for Villa Rica: The Lady Wildcats lost the first game to Blessed Trinity, 9-0, won their second contest 12-7 before ending their season with a 12-3 loss to Blessed Trinity in the best-of-three series.

In the victory Chloe Smith hit two home runs and struck out three.

Bowdon swept in first-round matchup: Anna Messer had two hits and Maggie Harris and Carlie Whitman drove in the runs for the Lady Red Devils in a 4-2 loss to Academy for Classical Education.

Bowdon also dropped a 9-4 decision to ACD. Harris struck out six and Caroline Huggins led the offense with three hits and an RBI.

Whitman and Huggins also drove in runs. The duo also finished with a double each.