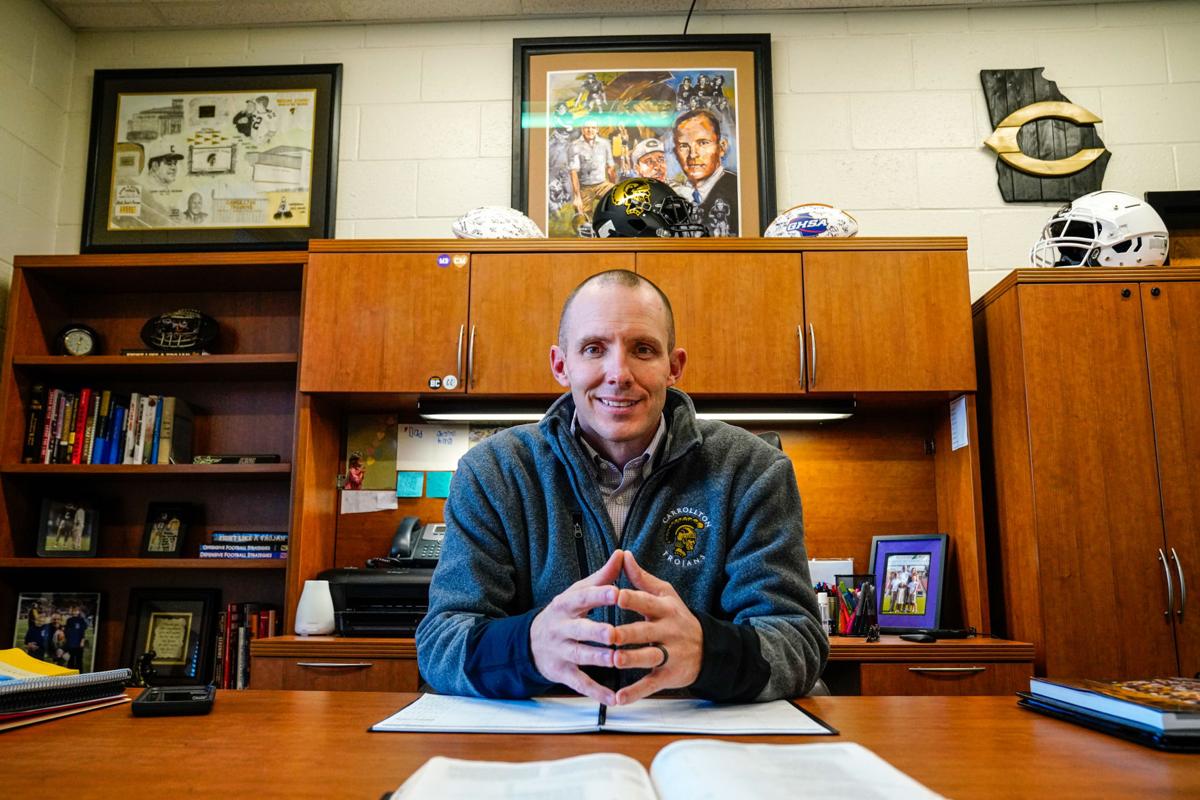 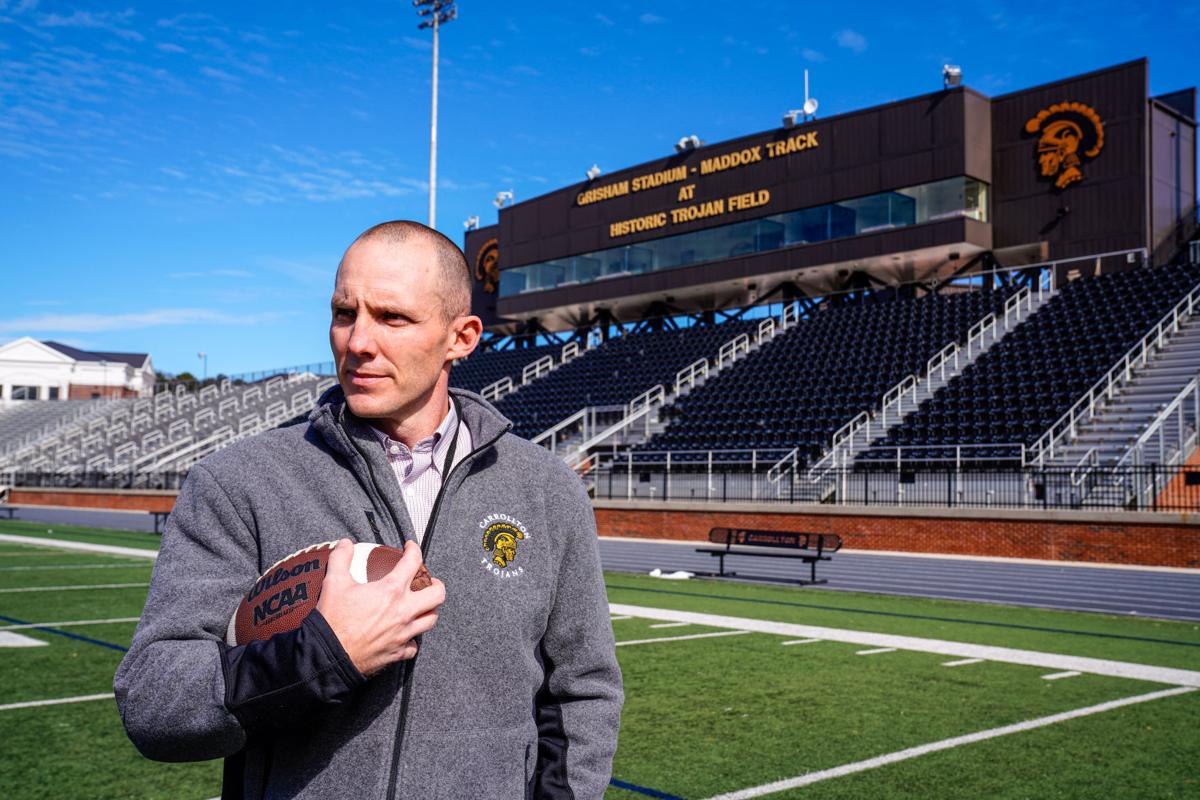 Who says that a history teacher can’t make an impact on a student?

It wasn’t just former football players who were excited to see Joey King return to Carrollton High School as head football coach almost two weeks ago. Yes, King did hear from some of the ex-Trojans he had worked with years ago as a Rayvan Teague assistant. But another group that reached out was a surprise.

Before he left CHS for his first head coaching job in Cartersville, one of his other duties was in the classroom teaching history. And it was those pupils — whom King did not also see in helmet and shoulder pads — who started calling with congratulations.

Now, King wants Carrollton High football to be as much about winning as about love.

On Jan. 18, the Carrollton City Board of Education approved bringing King back as program leader following Sean Calhoun’s departure for Vestavia Hills High near Birmingham the week before. King was on the staff at the University of South Florida for the 2020 season and at Coastal Carolina in 2019. For five years after leaving Carrollton, however, King jumped into the head coaching role for the first time at Cartersville High.

That tenure turned out to be quite legendary in the annals of high school football. The Purple Hurricanes won back-to-back state championships in 2015-2016 and reached the finals in 2018. Along the way, King helped develop the career of the one projected to be the No. 1 overall pick of the 2021 National Football League Draft, quarterback Trevor Lawrence.

Returning to Carrollton was, again, about love.

“We did the college coaching thing,” said King, settling into his football office with a view of Grisham Stadium. “There’s a lot of it that’s just focused on football. I enjoy pouring into young men and making a difference in their lives and seeing the impact. I feel like you get to do more of that at the high school level.

“Also, it was a family decision. In college, you’re recruiting and on the road. So much time is dedicated away from your family. I had a vision of coming back here and seeing my three little ones walk the sidewalk from the elementary school, crossing that creek, and coming to the field house after school.

“A lot of people may think I sound crazy for getting back into it — but I think this is a great opportunity to serve and be a part of the community.”

King first arrived in Carrollton in 2008 after first working in college at Jacksonville State and in high school at Sonoraville. Teague hired him as quarterbacks coach. Two years later he’s the offensive coordinator, and Carrollton reached the state finals King’s first year as OC (2010) and last (2013).

“Coach Teague was awesome,” said King. “His love for this place was unmatched. Loving these kids. Being a complete person. He has a wisdom in this profession in regards to how things operate. I was in here every day during my planning period trying to pick his brain. ‘Teach me something today.’ He taught me how to be a head coach and how to manage things.”

There are way too many Trojans from those days for King to recall. From the quarterback room, there was A.J. Barge, a member of the current Carrollton staff as a 9th-grade coach. That brought a “full-circle” memory for King. He also coached the University of West Georgia’s record-setting quarterback Dallas Dickey, who is on the staff at East Tennessee State. There was Wil Garrett, who also went to UWG.

“They were all true competitors,” said King. “They made me a better coach. They are all successful men now. That’s what this deal’s all about.”

“They were all impactful to me. I hope I was as impactful to them,” said King. “The thing that hit my heart the other day, when we were coming back it wasn’t just the former players or people in the community who were reaching out. Some former students I taught sent me messages saying, ‘You made a difference in my life when you were here. Glad to have you back in Carrollton.’ These aren’t kids I coached. These are kids I taught history. It was emotional. That impact is what I desire to continue to have.”

‘A CRAZY RIDE’Moving can be bittersweet, and it was for King going from Carrollton to Cartersville. In Bartow County, he was in charge of a staff and a whole team for the first time, which was certainly exciting. That wasn’t his first offer to be a head coach, but with Carrollton being a “special place,” most of those offers didn’t pull him away. He used patience to find that “right opportunity.” Being a head coach was his goal, so he trained his mind to go from making suggestions to making decisions.

“We put a good staff together,” said King. “Loved on those kids, and they responded well to every challenge we set forth. Our focus was always on loving those kids and using the game to teach life.”

O.K., what we really want to know about is Trevor Lawrence, who won a national championship as a freshman at Clemson. He’s also the GHSA all-time leading passer with 13,902 career yards and 161 touchdowns.

“He’s phenomenal,” said King, who still communicates with Lawrence. “He’s an unbelievable young man, obviously an unbelievable talent. The fact that he’s as humble and grounded as he is blows my mind. He realizes a lot of people give him a lot of attention because he can throw a football really well. God has given him a great platform. That’s something he uses to the best of his ability.

“I’ve seen him grow as a player. Everybody’s seen him do that. Seeing him grow as a man from the time he was a freshman to now understanding how to use his leadership, that’s special to me.”

King’s “ride” included his recent college stops. At Coastal Carolina, he worked for Jamey Chadwell, winner of four 2020 Coach of the Year awards nationally. King said he learned how to run a program seeing several things that meshed with his philosophy.

“Emphasizing loving each other,” said King.

“Football, it’s a game,” said King. “It will always be a game. I told the (Carrollton) team, ‘The No. 1 thing I’m going to ask you to do is work hard and love each other. If you do that, everything else is going to fall into place.’ I think it’s the greatest game in the history of the world. I love it with a passion.

“I can remember walking off the stage after that first state championship for Cartersville and thinking, ‘I’m going to take this in one more second.’ ”

But the final score had already been cleared off the Georgia Dome board. That meant, on to the next season.

PLANS FOR THE TROJANSCarrollton High’s campus is certainly different from when King left in 2014. King was walking the new high school halls with athletic director Paul Fitz-Simons and was wondering just where he was. It’s a waste of time to even compare then to now.

Faces are also new, or just older. He’s discovering youngsters he remembers as children now as big as he is … or bigger.

“The thing that’s always been here is the love for this place,” said King. “That’s evident as soon as you pull onto campus. The commitment from our grounds crew, the maintenance department, all these people who take pride in their jobs that make our system go.”

What else is different? Well, making plans to run a high school football program should be simple for King, but this is the first time he’s done it under conditions brought on by COVID-19. The pandemic almost wiped out the 2020 season, but it carried on even though some teams did not get in a full 10-game season.

“One of the most important characteristics leaders and successful teams have to possess is the ability to adapt,” said King. “This whole COVID deal is all about adapting, moving on and putting our kids in the safest situation possible and still trying to prepare for a football season. Whatever we have to do to keep those guys safe, that’s a high priority.

“Here, you have to embrace the tradition. It’s all about past Trojans, present Trojans, and future Trojans. As long as you keep those things in mind, you can be successful here. I think the sky’s the limit. We have the facilities, the support, and the talent to play at the level we want to play. It’s about representing the community, the school system, and the families well more than wins and losses.

“Dealing with football, it’s about playing fast and hard. The biggest compliment you can get as a football player is, ‘That dude played hard.’ It’s not that his arm was really strong or he could run really fast or he scored six touchdowns. That’s the Trojan pride we have to tap into and realize the intensity we need to play this game in every phase.”

There are no X’s or O’s on the dry board right now. King is looking to put together a quality staff and meet the players and get to know their names and hearts. Spring practice dates are not set yet, but King does not plan to have a spring scrimmage game with another school. He’s also working on the fall schedule and looking out for any new regulations based on the pandemic set by the GHSA.