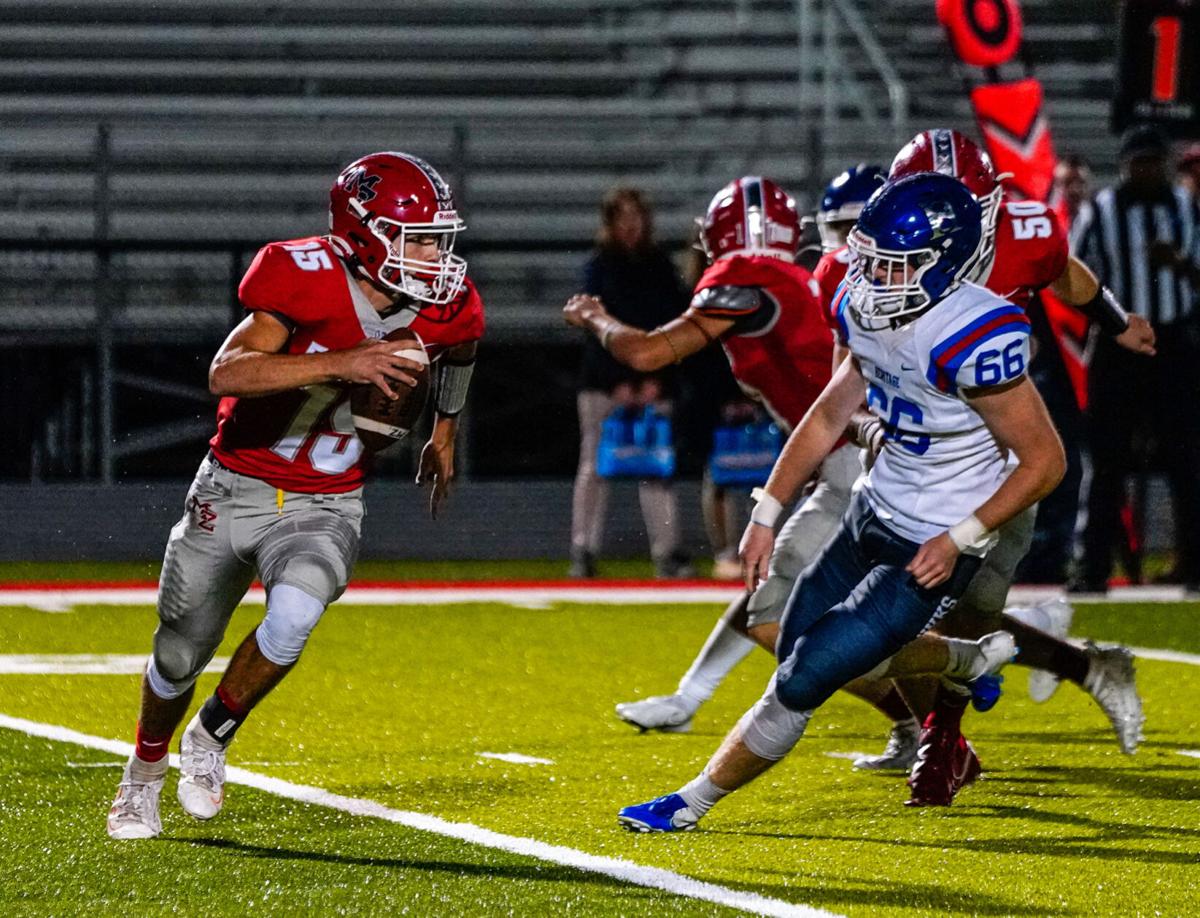 Mt. Zion senior Deven Rinehart scrambles under pressure during the game against Heritage High School at home on Friday evening. 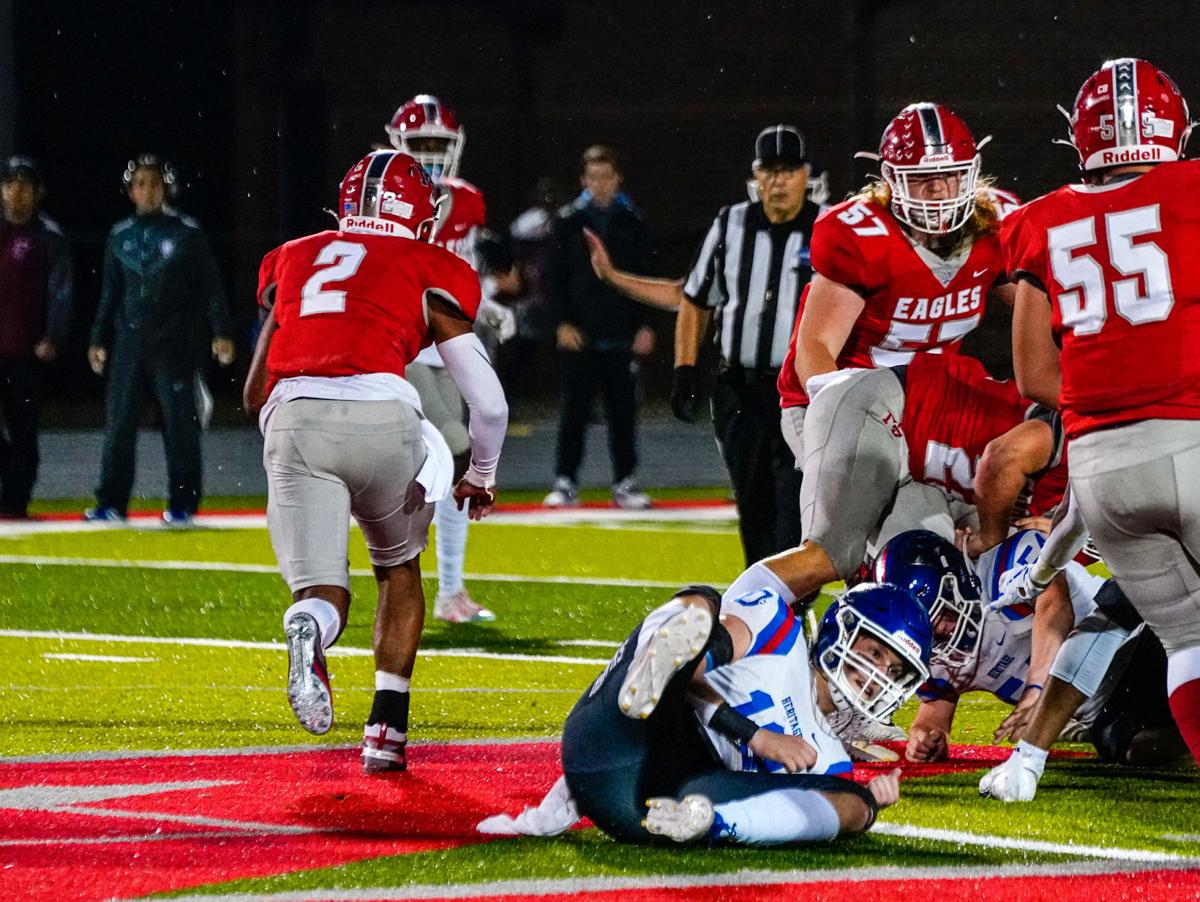 Mt. Zion senior Jayden Perkins carries the football for a first down against Heritage High School. 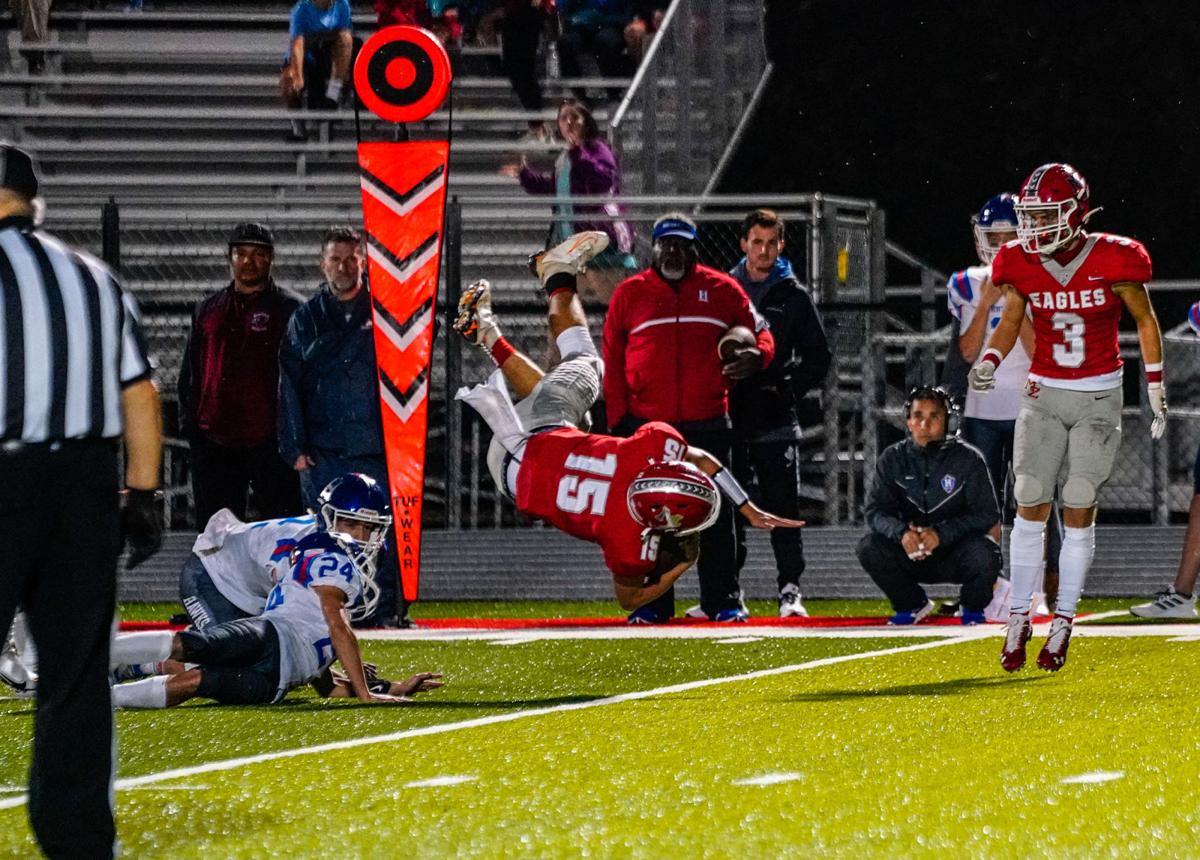 Mt. Zion senior Deven Rinehart scrambles for a first down and goes airborne following a tackle in the home game against Heritage High School on Friday.

Mt. Zion senior Deven Rinehart scrambles under pressure during the game against Heritage High School at home on Friday evening.

Mt. Zion senior Jayden Perkins carries the football for a first down against Heritage High School.

Mt. Zion senior Deven Rinehart scrambles for a first down and goes airborne following a tackle in the home game against Heritage High School on Friday.

The Mt. Zion Eagles remained undefeated Friday night after a 28-10 victory over Heritage.

The Eagles have executed formula all season that continues to pay dividends, run behind their big offense line, control both lines of scrimmage and dominate time of possession. They continued to put last season’s 1-9 record deep in their rear-view mirror. Quarterback Deven Rinehart ran the Eagle offense to perfection. He distributed the ball between fullback Dakota Browning who continuously found yardage between the tackles, while wings Jayden Perkins and Ethan Lepard worked on the outside.

Mt. Zion took the first lead of the night on a Dakota Browning 4-yard touchdown run in the second quarter. The Eagles’ offensive line had the advantage and Browning was running tough.

The Hawks created their first break of the night when Ellis Coggin intercepted a Rinehart pass right on the Heritage sideline. The Hawk offense gained a couple of first downs, including a gutsy fourth-down run by Andrew Rich but their drive stalled at the 12-yard line.

Keirnan Skelly was true on the 29-yard field goal to bring them within four at 7-3. On the ensuing kickoff, the Hawks executed a successful onside kick and looked for an opportunity to take the lead to halftime. The Eagle defense forced a punt right before the half.

The game changed dramatically in the third quarter. Mt. Zion received the kickoff and embarked on a 13-play, almost nine-minute drive that took a heavy toll on the Hawk roster. To further complicate the matter, Heritage’s emotional leader, Andrew Rich, remained in the locker room after the half for some additional treatment.

On their next series, the Eagles scored on a quick strike 61-yard touchdown pass from Rinehart to Christian Terrell. There was man-to-man coverage on the outside and Terrell just ran a post pattern past the defender and Rinehart hit him in stride for the score.

The Eagles added another score on Browning’s third rushing touchdown of the night, just at the beginning of the fourth quarter. An interception by Jasiah North sealed the victory.

The Hawks continued to fight; they scored a touchdown late on a 20-yard touchdown run by Jamal Chandler-Fuller.

Running back Fred Tolbert led the Heritage offense with 52 tough yards of rushing inside while Chandler-Fuller added 31.

For the Eagles, Browning lead the offense with 100 yards rushing on 22 carries and the three touchdowns. Kicker Dylan Roulaine was perfect on all four extra point attempts as well.

Heritage Coach Alba shared afterward, “These guys battle and they come back. They just embrace this idea, it doesn’t matter how many we have, we are going to go play and give it all we have. It is a really close team; they care about each other and love each other.”

From the Mt. Zion locker-room., Eagle Head Coach Brad Gordon shared, “Our kids are playing their tails off right now. The last couple of weeks we have had some injuries and Dakota has just taken things on his shoulders. Our offensive line is big and nasty up front and they are paving the way for all of our backs.”

Mt. Zion (5-0) will open their Region 6-A schedule this Friday at home when they host the Armuchee Indians (3-2).