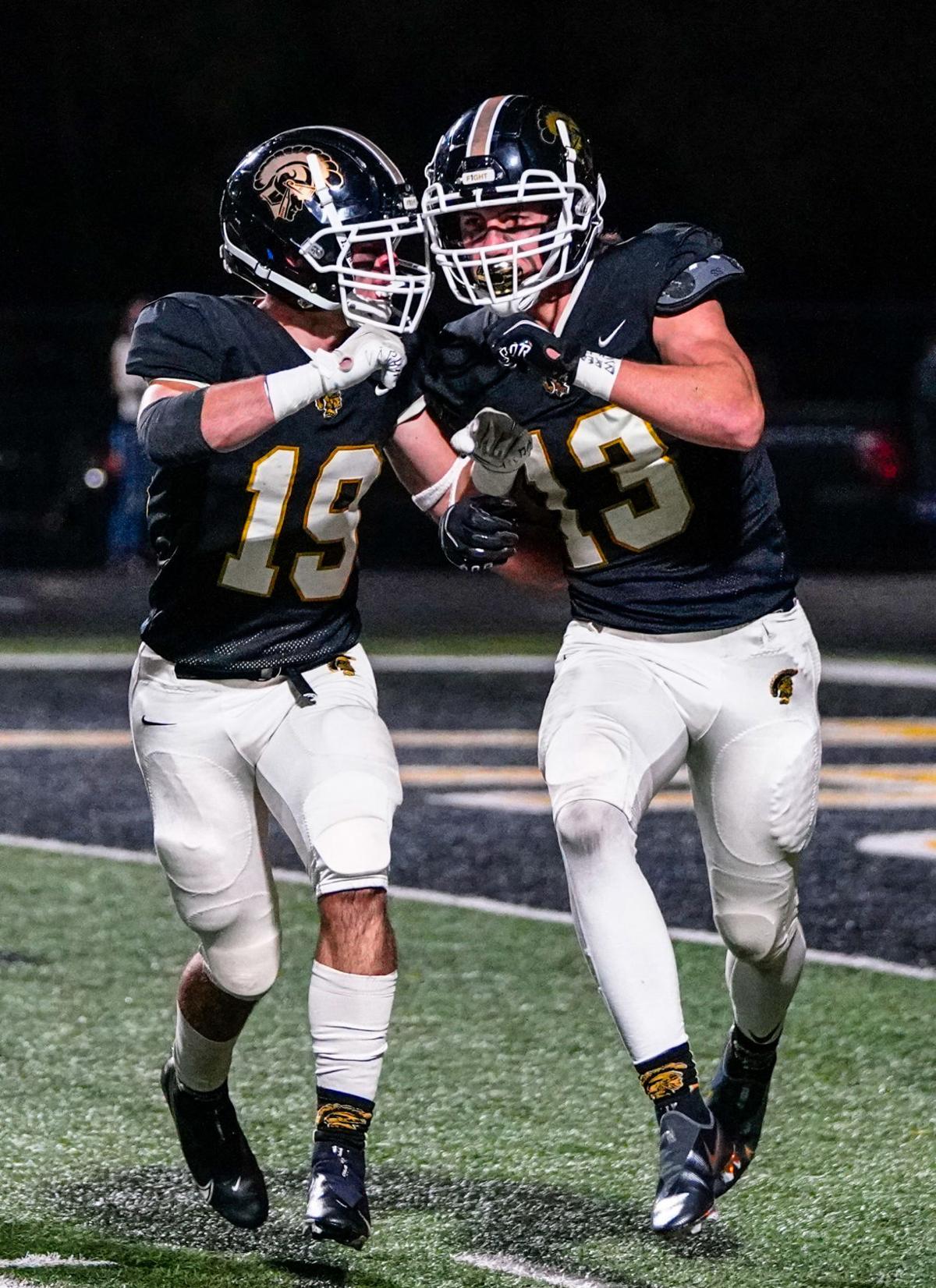 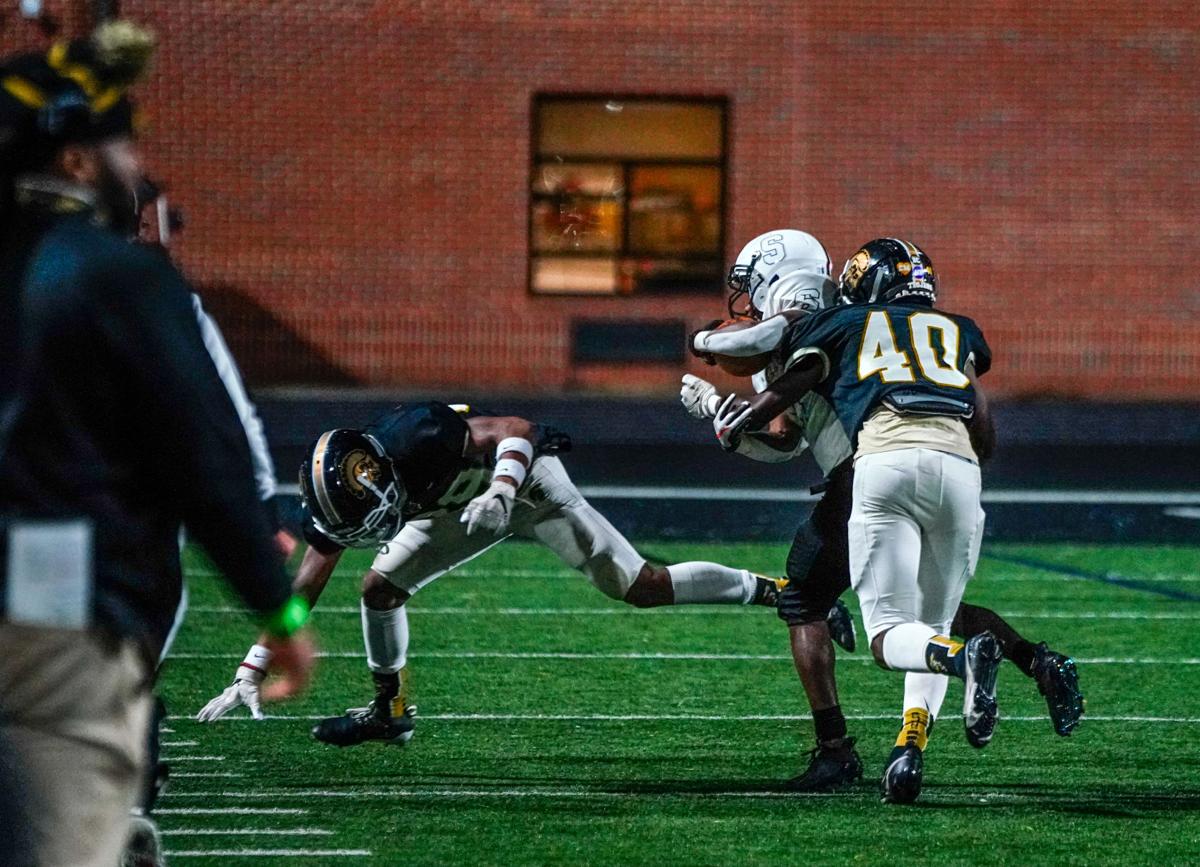 Carrollton sophomore Myles Butler takes down a Sprayberry player after a large gain of yards.

Carrollton sophomore Myles Butler takes down a Sprayberry player after a large gain of yards.

Carrollton will host the Valdosta Wildcats this Friday following the Trojans’ 39-13 victory over the Sprayberry Yellow Jackets in the second round of the Class AAAAAA state playoffs at Grisham Stadium.

Trojan running backs Keshawn Ridley and Christian Lett scored two touchdowns each, propelling CHS to advance to the state quarterfinals next Friday. The playoff run is over for Sprayberry, which did win its first-ever state playoff game last week. The Yellow Jackets season ends with a 7-5 record.

Carrollton will meet Valdosta — big winners over No. 1 seed Evans Friday night — in the friendly confines of Grisham Stadium in Elite Eight action. Valdosta will bring all their tradition and notoriety to Carrollton.

“This is a testament to our kids and our coaches. We were prepared to play Sprayberry and we went out and played a great game,” said Trojans head coach Sean Calhoun.

Ridley and Lett set the tone early for Carrollton. Both backs ran the ball 67 yards in six plays on the first series of the game, and the drive was capped by a six-yard touchdown run by Lett at the 9:31 mark. The Trojans then caught Sprayberry by surprise, getting a two-point pass from punter Preston Gentry to Juan Nieves III for the quick 8-0 lead.

Sprayberry would get no closer. Ridley scored on a 20-yard TD run a mere 22 seconds later and Damean Dominguez’ extra point gave the Trojans a 15-6 lead. The home team would not look back for the rest of the game.

“We were mad at first to give up the big run, but we fixed the problem after that,” said Trojans senior linebacker Chaz Chambliss, who finished the night with 8.5 tackles, two sacks and three tackles for loss. “We played assignment football and made plays on defense. We knew they couldn’t score on us.”

It was the Trojans who did all the scoring after Abbey’s TD run. After Ridley’s score, Lett scored on a two-yard TD run early in the second quarter for the 22-6 lead. Gentry then booted a career-long 49-yard field goal and quarterback James McCauley threw a 21-yard TD pass to wide receiver Grant Briscoe. When the smoke cleared, Carrollton led 32-6 at halftime.

“We jumped on Sprayberry from the start. Our coaches told us not to take our foot off the gas in the second quarter and we kept driving on them,” said Ridley, a junior. “We’re getting better and better on offense and we’re listening to our coaches, which puts us in the best position to win games.”

“We were prepared and we knew they couldn’t stop us. We have a great running game and it worked tonight, for sure,” said Lett, a senior. “The offensive line did a great job opening up holes for me and Keshawn all night.”

Back with Packers, Randall Cobb says, ‘I just have so much gratitude every single day when I wake up’

After COVID-19 bout, Packers assistant Jerry Montgomery ‘thankful to be back’

Both backs praised Trojans running backs coach A.J. Barge after the game, mentioning his game plan for the duo worked like a charm.

“Coach Barge told us exactly what Sprayberry would do and it happened just like he said,” said Lett, who finished the game with 54 yards on nine carries.

Gentry wasn’t sure if his career-long field goal was good when he first hit it.

“I thought that I missed it at first. But then as I watched it, I jumped up and said that it’s going to be good and I ran to the sideline,” he said. “It’s good that we won and good that we scored a lot of points. Scoring touchdowns means less than punts; it’s always good to get seven points.”

Ridley scored Carrollton’s final points of the night in the fourth quarter, getting a 22-yard TD run for the 39-6 lead. He finished with 174 yards rushing on 15 carries, averaging 11.6 yards per carry. Josh Bush scored on a nine-yard touchdown run for Sprayberry late in the game for the final 39-13 margin as the reserves finished the contest.

The focus for Carrollton now shifts to quarterfinals action at home against Valdosta, which has 24 state titles and a record number of wins. Calhoun once worked for current Valdosta head coach Rush Propst and said the game between the two teams will be special.

“This will be a battle of two historic programs with the same uniform colors [black and gold] and a lot of tradition,” Calhoun said. “I’m glad our community will get a chance to experience this. Both names ring out loud and that’s what you want in the quarterfinals. We have to be prepared for Valdosta, because they will be prepared for us.”

Chambliss said he’s ready to face the Wildcats and all that comes with playing such a popular team.

“The bottom line is we’re not playing Valdosta’s past. We’re not playing their history,” he said. “It’s about what you are doing right now, this year. We’re looking forward to it.”