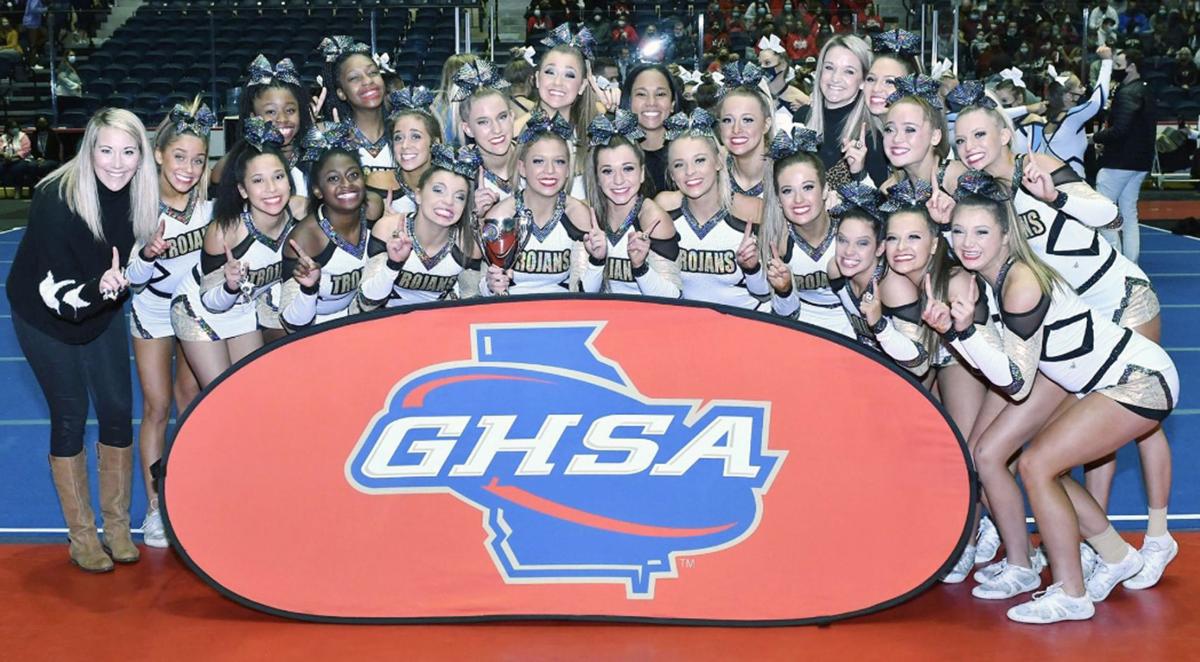 The eighth GHSA competition cheerleading champions representing Carrollton High School overcame so much to earn this trophy Tuesday in Macon. 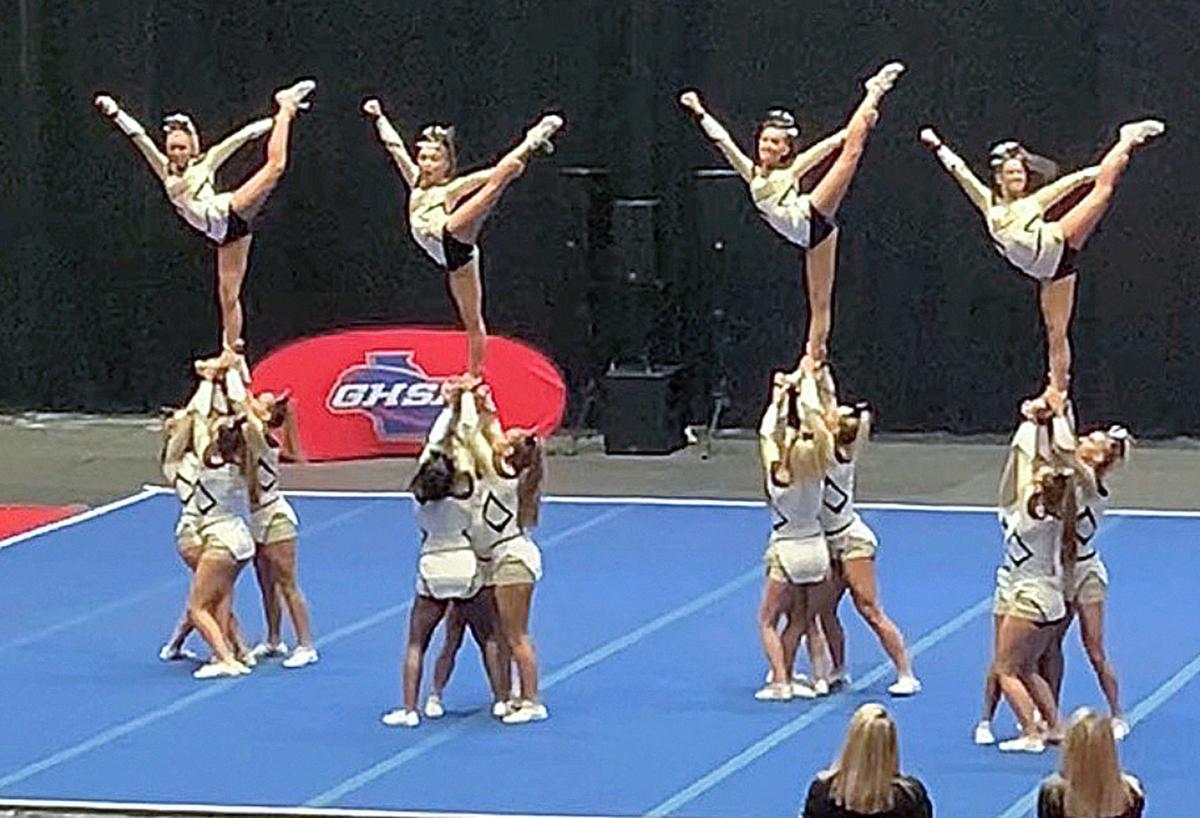 The Lady Trojans excelled in their routine in front of several hometown spectators.

The eighth GHSA competition cheerleading champions representing Carrollton High School overcame so much to earn this trophy Tuesday in Macon.

The Lady Trojans excelled in their routine in front of several hometown spectators.

Overcoming adversity is basic to achieving a goal. The whole world shared the same adversity in the form of a global pandemic, but when adding personal losses of different kinds, reaching a common goal becomes much more special.

Even if victory is your expectation and happens time and again.

For the eighth time over the past two decades, Carrollton High School’s competition cheerleaders won the Georgia High School Association 6A championship on Tuesday. It happened in front of a host of supporters at the Macon Centreplex.

Three of those trophies were claimed in the last four seasons alone under head coach Elizabeth Sanders (the previous two were in the 5A classification, Carrollton moving up one level last fall).

It was a season some may have thought wouldn’t happen. Almost a year ago, no GHSA state champions were crowned in spring sports as schools everywhere closed to stop the spread of COVID-19. Concerns about the virus lingered for the ensuing fall.

However, schools started new sports seasons and state competitions also returned, even though competition cheerleading was pushed ahead on the calendar.

In November of 2019, the Lady Trojans’ bid for three titles in a row was thwarted by a judge’s decision — or preference — when they and McIntosh achieved tied scores at the top.

“It just didn’t seem fair at the time,” said senior Savanna Duncan. “I know us losing last year helped the motivation for this year.”

For Sanders, it’s the fourth time she’s coached state champions. The first was in 2015 in the 4A classification. Her squad has 12 seniors who are now three-time state winners.

“They are just an outstanding group of girls,” she said. “In everything they do, they exude excellence. They have high expectations for themselves. One of the things we said every day is you have to win the day. We didn’t focus on the state championship, but on each day we were given.”

“We have a high expectation to live up to, so living up to that was incredible. We try to stay consistent and confident throughout everything we do.

“Each week we were thrown a different obstacle. We had 12 seniors who showed great leadership that really helped out the team. Every person on the team contributed something. If we all weren’t in it, it doesn’t work. The whole entire team was there.”

Husker recruiting notes: Catching up with a potential 2022 center; Helms gets a ratings boost; new offers out

Sanders said moving up to 6A meant much more in terms of quality teams to beat, at least 15. Carrollton topped Houston County on Tuesday by a point and a half (103.5 to 102), which Sanders said in the “cheer world” means a fairly wide margin.

“It seemed like the whole city of Carrollton was in Macon,” said Sanders. “We had the biggest showing out of any school system there. That was outstanding.”

“All of the parents, friends. It was amazing to see all of Carrollton right in front of us while we were competing,” said Duncan. “It’s that Carrollton feel, everybody’s community.”

“Outstanding” considering the limitations on spectators at athletic events brought on by the pandemic (state swimming at Georgia Tech did not allow spectators at all). While the quarantines put in place after schools closed in the spring, and the restrictions on practice times made this a season unlike any other, Sanders’ personal dealings made life ever harder each day.

When the season finally began, the coach’s brother-in-law lost a battle to cancer. The GHSA moved the championships from November to February. Sanders said on the day that would have been the state finals, her mother passed away at the age of 58 from a heart attack.

“The resilience of this team to keep pushing along with me … they were given every excuse to give up, but they never once did,” she said. “We had a kid on Sunday, at the final showcase, break her leg. We put an alternate in Monday, and she competed and won a state championship Tuesday. The year of adversity for sure. This team has a sweet and special story.”

Hutton Green is the one who unfortunately suffered the leg injury, and her alternate was Mary Moore.

“She stepped up multiple times throughout the season,” said Duncan. “It worked out perfectly. She did incredible.”

The senior also spoke of the dedication to the program and what the cheer squad does each day to maintain a high standard. If they aren’t practicing the routine, they are running or exercising in some way.

“Everyone is trying to be the best,” said Duncan. “Carrollton can win as long as they are doing what they need to do. It has taught me to work hard at everything. In the end it will always pay off.”

Duncan plans to attend the University of Georgia, which does not have competition cheerleading — but she would like to join the sideline game squad.

She was thankful to have that last competition season in high school. Celebrating victory also brought the realization this was the last time Duncan and her fellow seniors would wear the uniforms of Lady Trojans.

“Lots of emotions going through my head. Super sad, but super happy. We did what we needed to do,” she said.