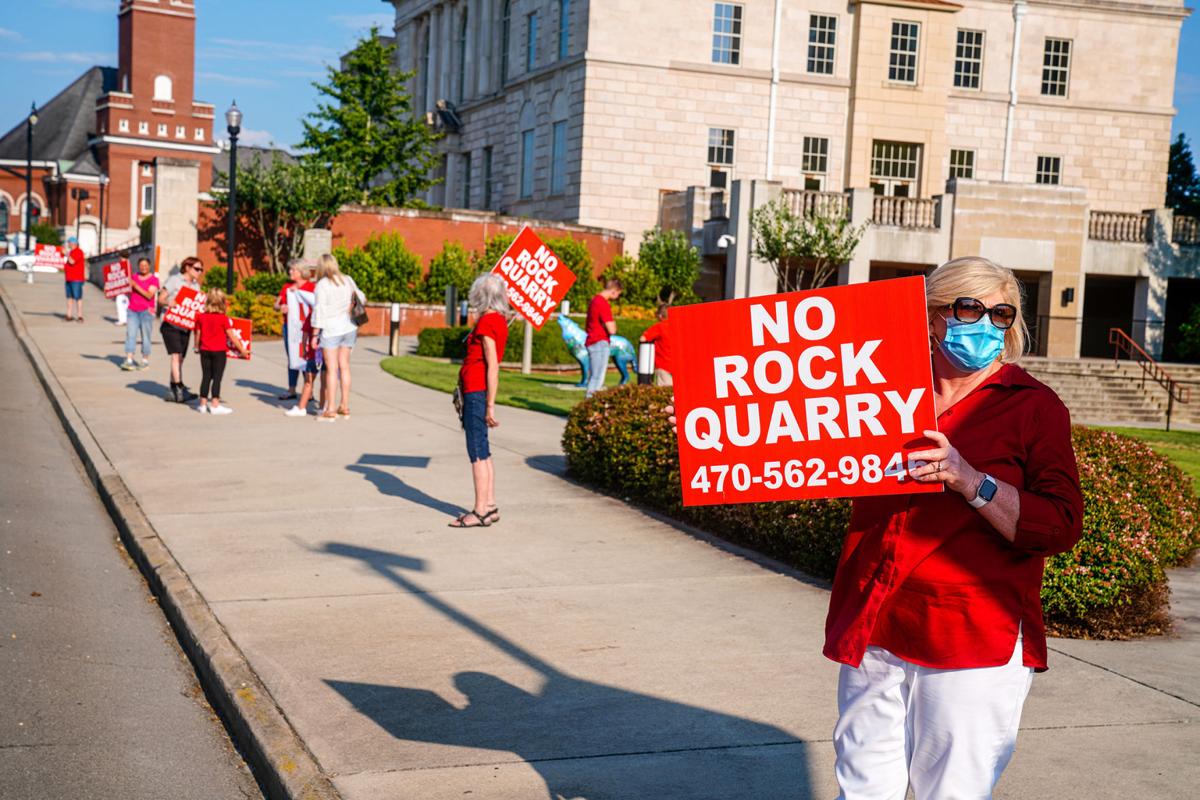 Deborah Cook, right, holds a “No Rock Quarry” sign as she stands on Newnan Street with fellow protesters Tuesday outside the building where county commissioners were meeting. 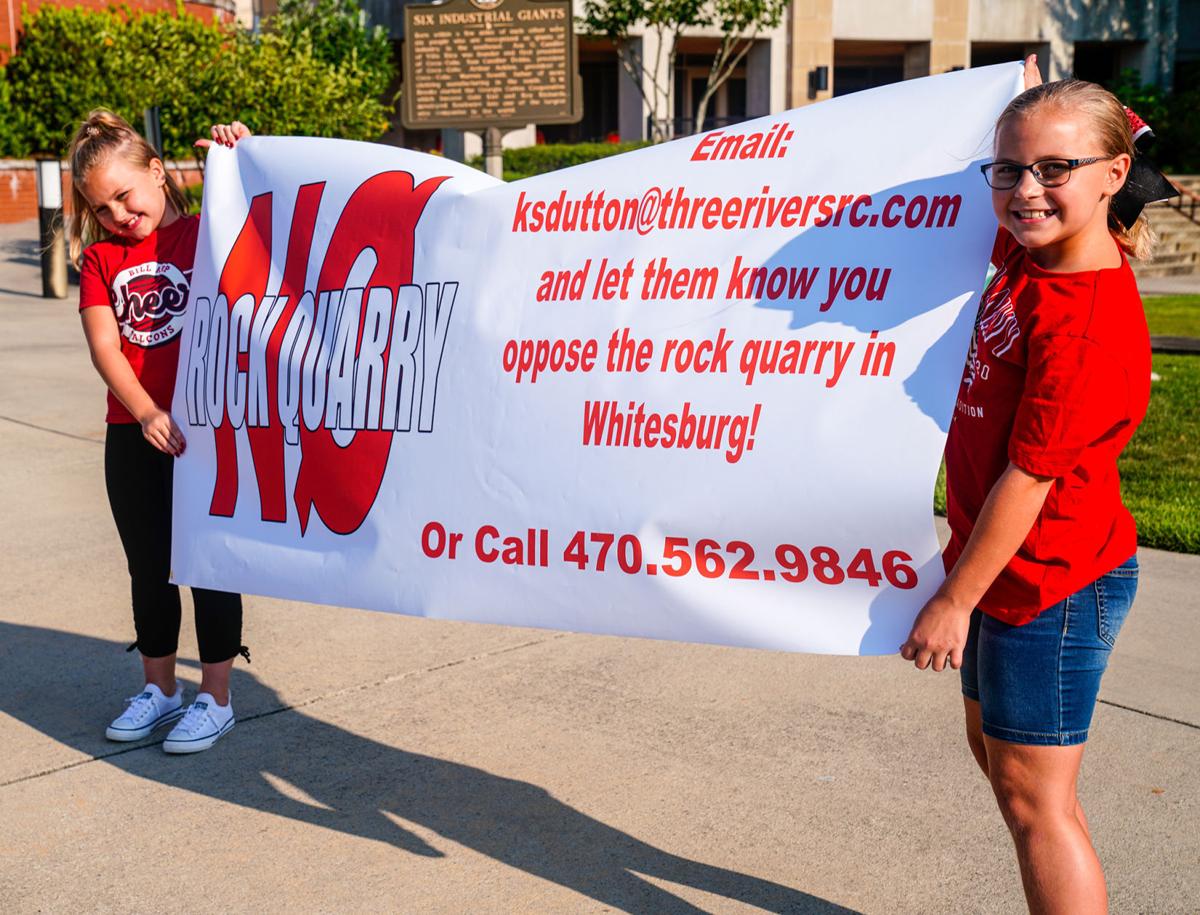 Pictured, from left, are Annabelle, 8, and Kensley Wilson, 10. The sisters and their family live across the street from a portion of the proposed quarry. 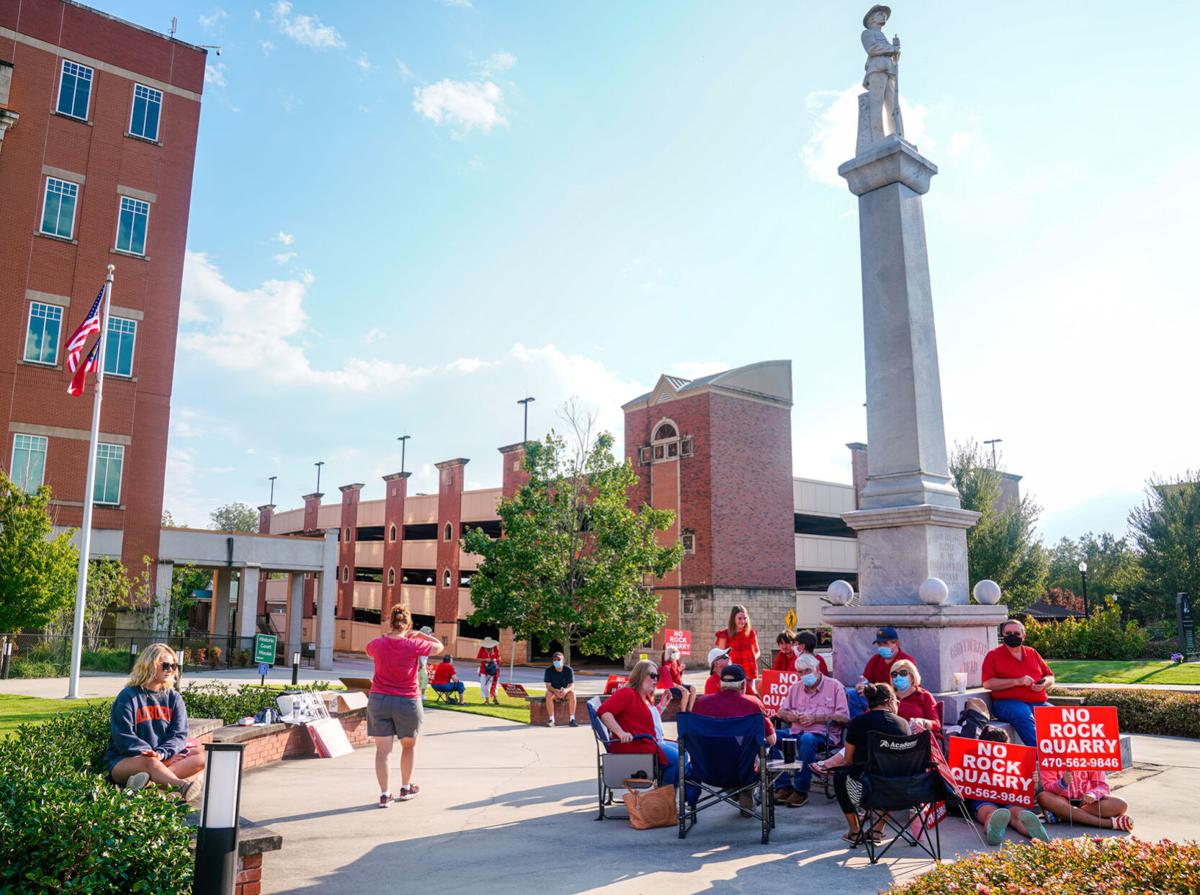 People from Carroll, Douglas and Coweta counties gathered outside the Carroll County Courthouse on Tuesday to protest a proposed rock quarry along the Chattahoochee River.

Deborah Cook, right, holds a “No Rock Quarry” sign as she stands on Newnan Street with fellow protesters Tuesday outside the building where county commissioners were meeting.

Pictured, from left, are Annabelle, 8, and Kensley Wilson, 10. The sisters and their family live across the street from a portion of the proposed quarry.

People from Carroll, Douglas and Coweta counties gathered outside the Carroll County Courthouse on Tuesday to protest a proposed rock quarry along the Chattahoochee River.

A number of residents from the Whitesburg area near the site showed up at the commissioners’ meeting, while others stood in front of the courthouse on Newnan Street with signs opposing the project proposed by Green Rock, LLC.

The Birmingham-based company plans to establish a rock quarry on approximately 350 acres in Carroll County at the intersection of Black Dirt and Hutcheson Ferry Roads.

The area is currently zoned as “agricultural.” According to the Carroll County zoning ordinances in effect when the quarry was proposed, the development of natural resources — including quarries — was permitted on land with that designation. Because quarries were a permitted use, the developer did not need approval from the Carroll County Board of Commissioners for the project.

However, the change approved by the commissioners on Tuesday transfers the “development of natural resources” language from agricultural zoning to industrial zoning.

District 5 commissioner Ernest Reynolds, who has voiced his opposition to the quarry, has said that he is not sure how the change in the ordinance will affect the current project.

This quarry has been met with criticism and opposition from many, including a citizen’s group in Whitesburg, current Whitesburg mayor Amy Williford, current commissioner Reynolds, former District 5 Commissioner Kevin Jackson, and the Chattahoochee Riverkeeper, an environmental group that protects the Chattahoochee River, which flows near the site.

David Grayson, Director of Mining Operations at Green Rock LLC, has started an effort to share information around the project and address the concerns of those are opposed to it.

The quarry, which Grayson described as being small, would have several emplacements that he said would mitigate the effects of quarrying operations on people living nearby, including dust reduction, a buffer zone, and a vegetated berm.

The quarry would be mining for Granite Gneiss and Grayson expects there will be approximately 300,000 tons produced.

“Granite Gneiss does not allow for the intrusion of water and thereby [would have] no impact on the Chattahoochee River and/or surrounding water sources or neighboring wells,” said Grayson.

Grayson also said that there would be no additional cost to taxpayers, as any incremental cost associated with upgrading Black Dirt Road would be paid for by Green Rock.

The company expects the permitting process to take five to six months, meaning that the site could be operational by early next year.

“It’s an undisturbed buffer, which means we’re not going to touch a tree or anything else for 1,000 feet,” said Grayson.

While Grayson added that even with the buffer zone, some dust and sound will occur. But he said the company will use “the newest generation in dust suppression system to ensure that we adhere to all EPD air quality guidelines.”

Blasting will occur at the quarry, he said, typically occur once a month on a weekday. Those residents who choose would be placed on a call list so that Green Rock can inform them of the blasting, Grayson said.

Grayson added that the quarry, like other quarries he has worked on, would have an “adopt-a-school” program in which the company will partner with local schools to educate children on the quarry through tours, financial support, and volunteerism.

The quarry would employ 10 to 12 people, and Grayson said a Georgia Power study estimates the quarry would provide approximately $4.5 million of positive economic impact to the area.

Greyson has urged anyone with concerns or questions to contact him directly at dgrayson@green-rock.com and can provide more information on the quarry if needed.

“It’s the unknown that scares folks and I get that. We’re going to be a good neighbor,” said Grayson.