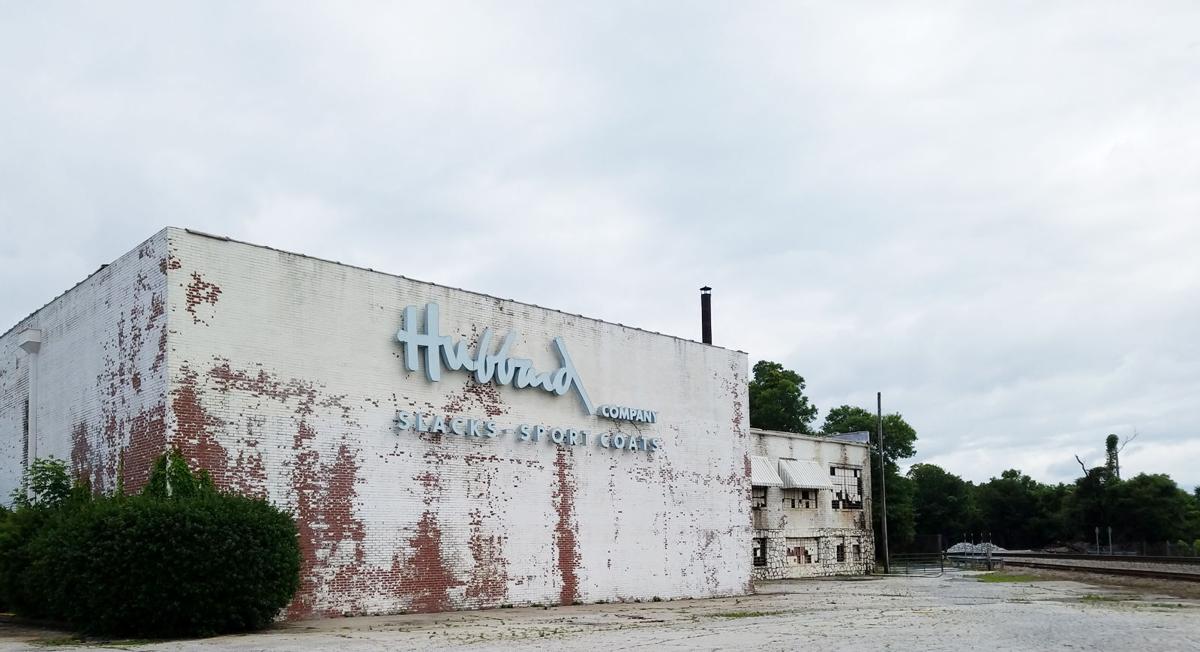 The Hubbard Slacks building in downtown Bremen may be nearing the end of its life. The city advertised for bids to demolish the building after being unable to find a developer to purchase it. 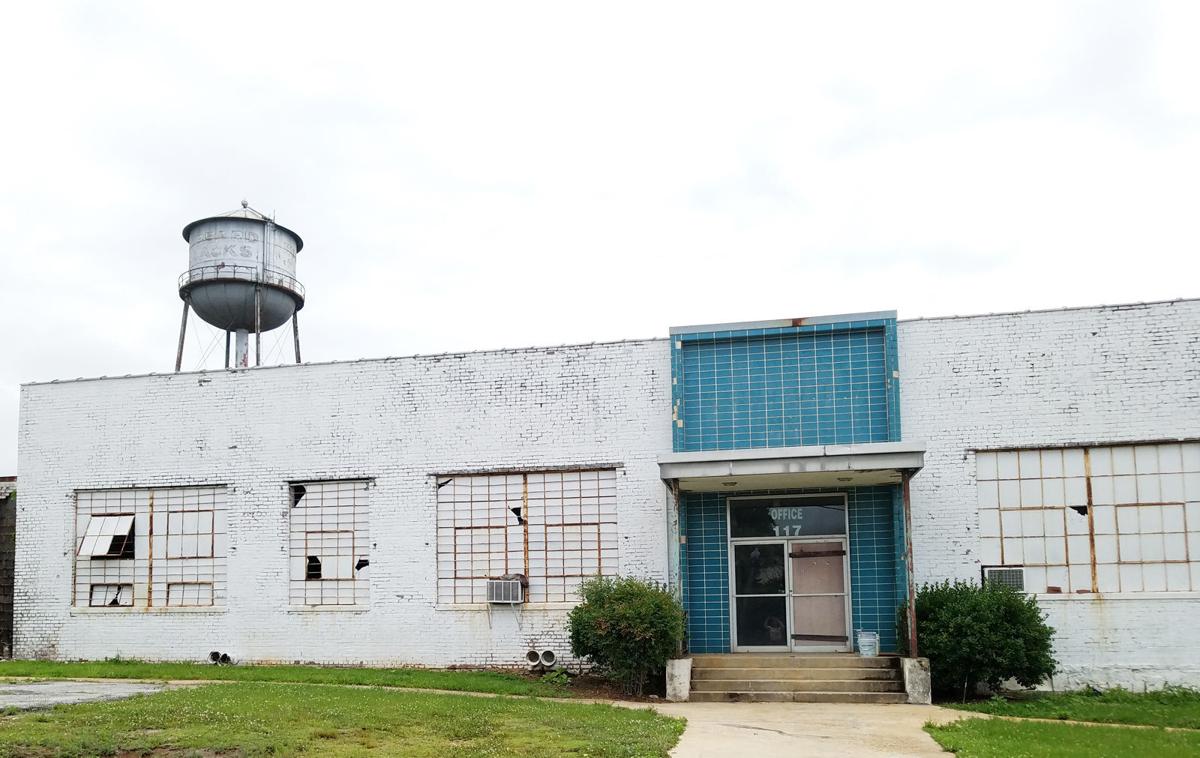 Just like the rest of the Hubbard plant, Hubbard’s water tower has fallen into disrepair. The writing has faded and the metal is rusting. That tower used to be bright silver, said Bremen City Councilman Jai Otwell. “It used to shine,” behind the plant. The tower too may go if the city demolishes the plant.

The Hubbard Slacks building in downtown Bremen may be nearing the end of its life. The city advertised for bids to demolish the building after being unable to find a developer to purchase it.

Just like the rest of the Hubbard plant, Hubbard’s water tower has fallen into disrepair. The writing has faded and the metal is rusting. That tower used to be bright silver, said Bremen City Councilman Jai Otwell. “It used to shine,” behind the plant. The tower too may go if the city demolishes the plant.

The iconic Hubbard Slacks building in downtown Bremen is slated for demolition.

On Tuesday, the city of Bremen closed the bidding process for the demolition of the building, which has been standing for decades on Hamilton Avenue. The move to raze the building is a change for city officials, who bought the property in 2018 for $150,000 with the idea of preserving the structure.

But things have changed since then, said City Manager Perry Hicks.

“At some point in time there had been discussion with some developers about the redevelopment of the property,” Hicks said. “It was their opinion that it was cost-prohibitive to move forward with development, and so we really had those conceptual ideas fall apart because of economics.”

The building was just too dilapidated, too far gone, she said.

It has become a safety hazard and there is the issue of blight, Hicks added. Although the city has cleaned up the outside of the building and the lot, it is still dilapidated and taking up space that could fulfill some other purpose, he said.

But it’s hard to see that historical building go, Sewell said. Her family name is synonymous with the clothing industry that put Bremen on the map in the midcentury. Sewell clothing manufacturing plants spurred Hubbard Slacks in Bremen, she said.

Warren Sewell Sr., was originally involved in Georgia Converters, a sewing operation that later became Hubbard Company, Sewell said. It may seem odd considering today’s business climate, but though they were all competitors, the clothing industry business owners were also friends, she said.

Hubbard Slacks operated in Bremen from 1935 until 2009. For much of that time, Bremen was known as the “Clothing Center of the South.” The Sewell companies, Hubbard Slacks, and Arrow shirts were all operating in the city.

At that time, if you wanted men’s clothing, you came to Bremen, said Bremen City Councilman Jai Otwell.

In the 1970s, the plants also drew more than 2,500 workers to the downtown of tiny Bremen. During the lunch hour, the employees poured out of the factories and into the downtown to do their shopping, eating, and socializing. Buses were available to take them somewhere over the lunch hour.

“It was really a sight to see,” said Mike Thompson, now manager of Operations for the city, but for 18 years an employee of Hubbard Slacks.

Mayor Sewell said it was like being in downtown Atlanta.

OR Gov. on vaccine divide: 'This is truly a tale of two pandemics'

“When the whistles blew and all the people got off work at the same time, at 5 o’clock, you wanted to be out of town because the traffic was huge,” she said.

Bremen’s downtown was then bustling with sandwich shops, cafeterias, clothing stores, drug stores, five-and-dime stores, all drawn there to serve the plant workers.

“So there was just a lot of business. There were a lot of people downtown and it was always a rush,” Sewell said. “It was very, very busy.”

Thompson’s father worked at the plant until he died in 1981, he said. He started working there full-time as a stock clerk in 1972. Thompson worked his way up through the ranks to become the credit manager and supervisor of the sales force.

“It was a great company to work for,” Thompson said. “Once a year we had a big barbecue. They would clean out the tables in the lower building there. They would cater barbecue and feed everybody. Mr. Sam Hubbard carried the shipping clerks to Florida every year.”

There was a sense of family among the employees, he said. People knew each other and cared about each other. And it was lucrative. When he worked there, he always had money in his pocket, Thompson added.

It was lucrative for the whole region. The Sewell companies had plants in Buchanan, Bowdon, Temple, Douglasville, and Rome, Georgia, as well as Heflin, Alabama. The plants gave people all over the area good jobs and those employees spent their money in their hometowns.

Benefactors of the community

Otwell, whose father worked for Hubbard Slacks, said the companies were also good for the community.

“They supported the schools, the kids, the churches,” Otwell said.

“Everybody loved Mr. Hubbard,” she said. “Back in those days, First Baptist Church had a big bus ministry. [It] would drive through town, picking up kids to bring them to church and Mr. Hubbard bought the buses. Just a good, good man.”

Although there is a lot of nostalgia attached to the old building, Otwell said he’s not sorry to see it go.

“It’s somewhat sad,” Otwell said. “But knowing something new will come from it, I’m OK with it.”

Beyond the possible demolition of the building, the city doesn’t have any particular plans for the property at this point, Hicks said. During Bremen City Council meetings there have been a number of ideas brought up including parking, green space, or a food truck court. Hicks said he’s not even sure if the property will stay in the hands of the city as a community space or be sold for development.

“We do not have a determinate project or solution for that property,” Hicks said, adding, “The hopes are that it is economical enough for us to be able to take city monies in hand and be able to pay for the demolition and clean this up.”

The next scheduled meeting of the Bremen City Council is Monday at 7 p.m.