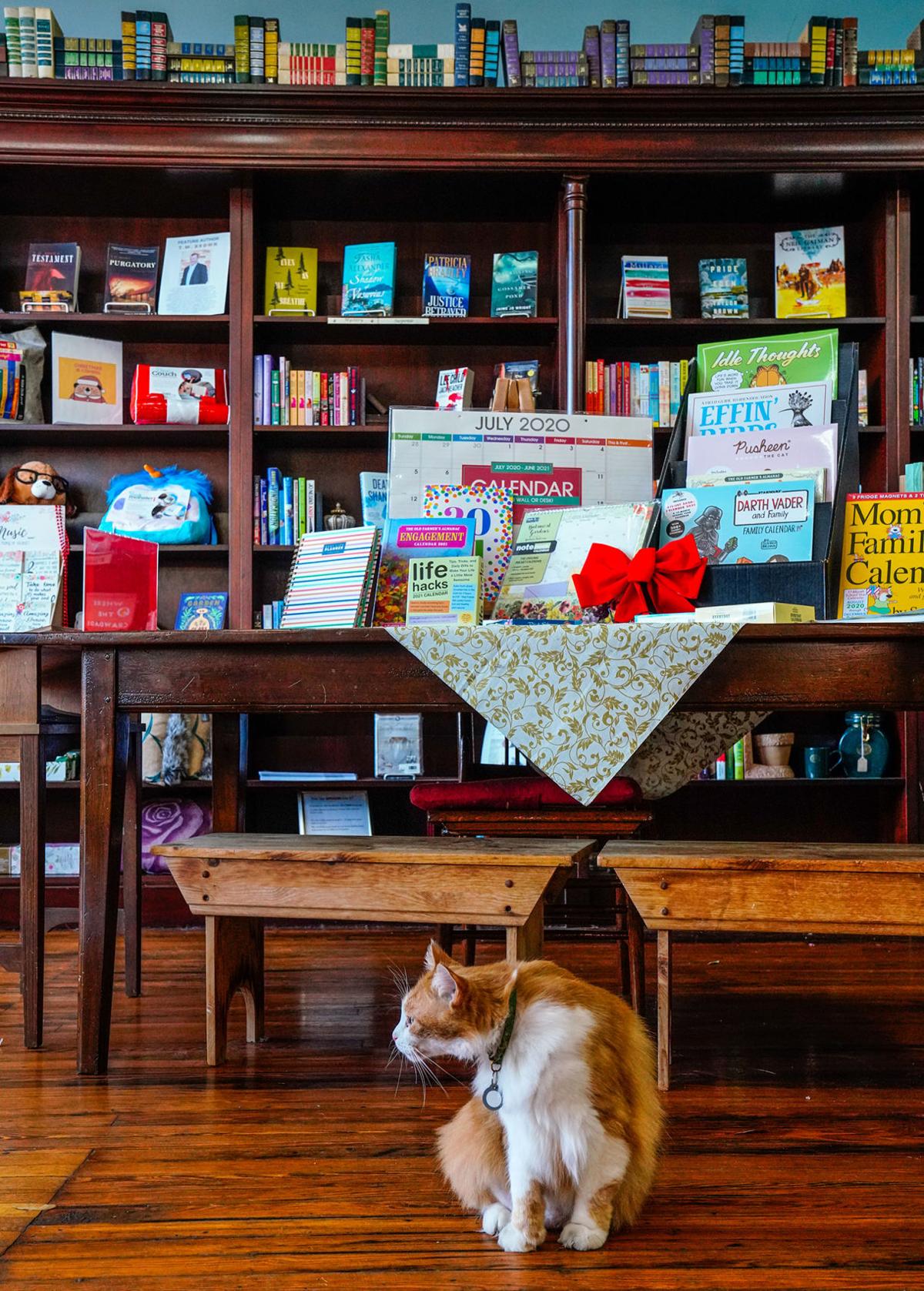 In this file photo, Dante, official store mascot, watches people through the window as they pass by Horton’s Books & Gifts at Adamson Square. 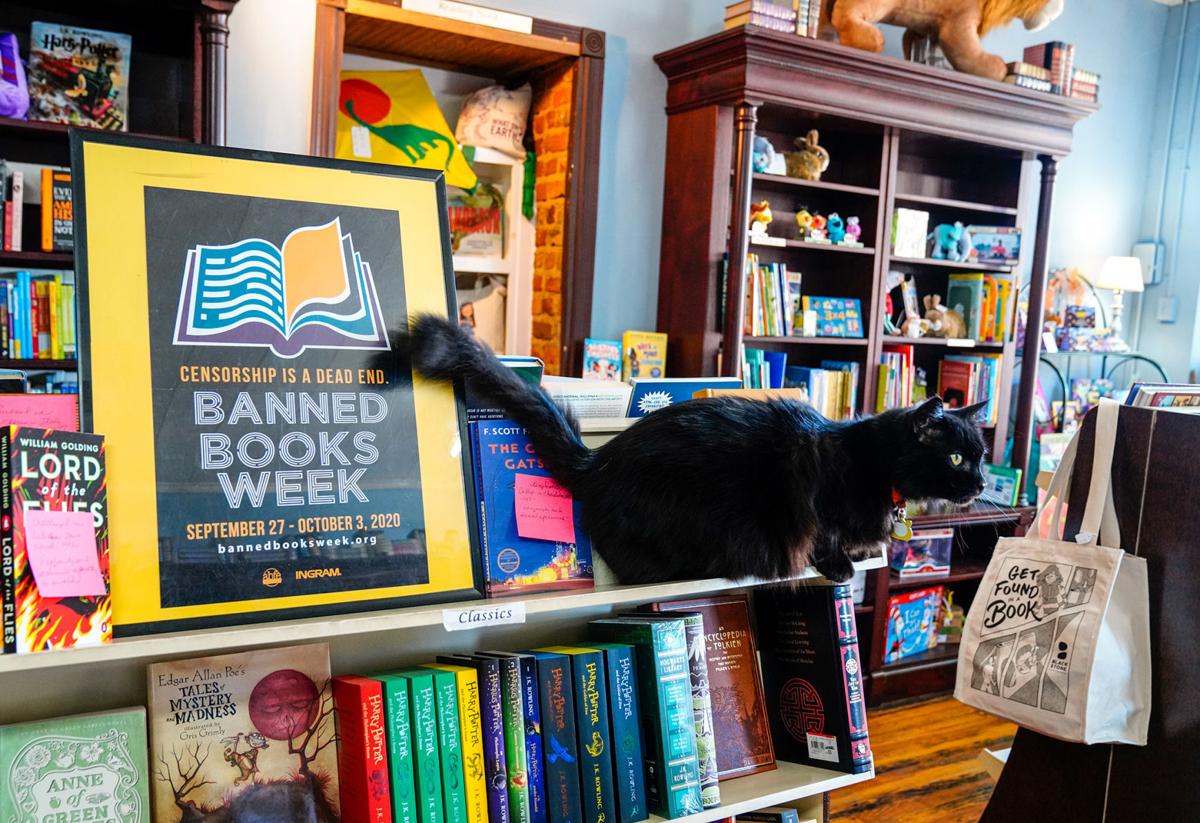 Poe, a resident cat at Horton’s Books & Gifts, sits on a shelf beside a flyer for Banned Books Week, an event the bookstore sponsors each year to highlight the benefits of free and open access to information. 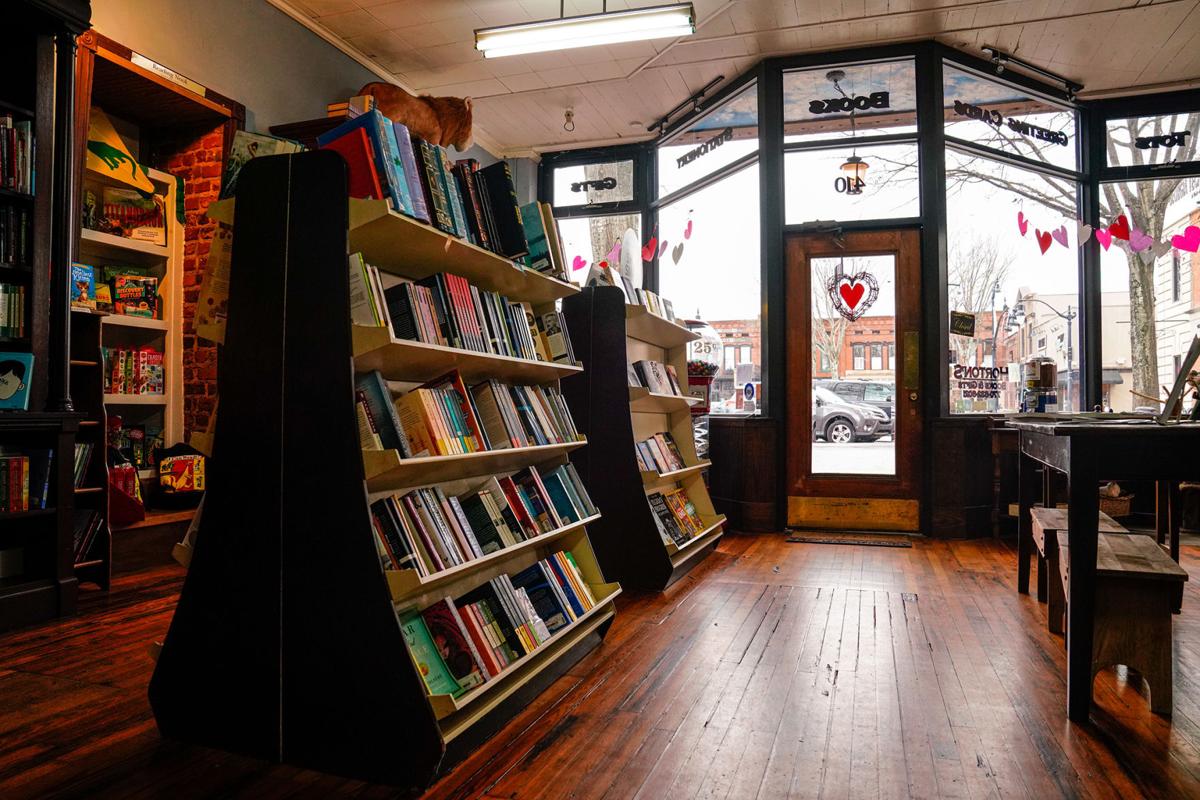 Inside Horton’s Books & Gifts shop at Adamson Square in Carrollton.

In this file photo, Dante, official store mascot, watches people through the window as they pass by Horton’s Books & Gifts at Adamson Square.

Poe, a resident cat at Horton’s Books & Gifts, sits on a shelf beside a flyer for Banned Books Week, an event the bookstore sponsors each year to highlight the benefits of free and open access to information.

Inside Horton’s Books & Gifts shop at Adamson Square in Carrollton.

Georgia’s oldest bookstore will be celebrating its 130th birthday later this year — and the staff wants west Georgians to suggest what kind of party they should have.

Horton’s Books and Gifts was founded in 1891, which also makes it one of the two oldest businesses in Carrollton. During that time, it has only had five owners, men and women who have steered the shop founded by Newton Allen Horton into the era of the Internet.

To celebrate, the bookstore is taking a survey asking folks in Carrollton and across the region for suggestions. Those who are on the store’s email list received a message with a link to the survey. It asks what type of party the store should have, what day and time the celebration should be held, and what kind of food, if any, should be available, as well as other suggestions.

Although from best information the store was founded in late May or early June of 1891, store owner Dorothy Pittman said Wednesday that the anniversary party will be in the fall. That’s because the pandemic may be more under control by then and because the weather will be a cooler.

Newton Horton, founder of the store, was born in 1857 in Pike County, located southeast of Newnan. He came to Carroll County in his early ‘20s and became a teacher in Cross Plains. Then, as now, teachers did not earn much, so he began working with the Carrollton Furniture Co.

The first notice that Carrollton was about to have a bookstore came by way of a small community item in the Free Press newspaper on May 8 of that same year. “Mr. H is a nice and clever gentleman,” the newspaper noted, “and will no doubt do well, as a book store is much needed here.”

For the next 28 years, Horton did do well, working first out of a corner of the hardware store — which continued to do business in the funeral trade — and by 1900 moving to where the store is located today, 410 Adamson Square.

Tapper reflects on the lasting legacy of the Civil War

On Dec. 29, 1916, the 59-year-old Horton suddenly died. One of his two sons, Hewling Stocton Horton — nicknamed “Hap’ — took over the store the following January.

Hap Horton did things much as his father had done, but he also moved the store around several times. Over the next 50 years it was at various locations around the Square, including the old First National Bank building (site of the current West Georgia Technical College office) and a site on Alabama Street where the parking garage now stands. In 1956, it moved back to its original location.

In 1946, Doris Shadrix began working at the store. Some 20 years later she had become a partner in the business. She began running it after Hap Horton died in 1969; she later sold the business to Larry Johnson. In 1997, Johnson sold the store to its fifth and current owner, Dorothy Pittman.

Pittman grew up on Dixie Street and knew both Hap Horton and Doris Shadrix. She moved away to pursue a career as a librarian, eventually winding up in Baltimore. When she returned to Carrollton to settle her mother’s estate, she asked then-owner Johnson for a part-time job.

Nowadays, Pittman is as much a Carrollton institution as was her predecessor, N.A. Horton. She has turned her librarian’s mind to also researching the history of her store. Her office in the back of the shop is stacked with boxes full of files and clippings that she has collected over the years.

Today, Horton’s and C.M. Tanner Grocery are the only two businesses in Carrollton founded in the 19th century that are still in business during the 21st. In an era in which everyone’s computer is a bookstore, Horton’s has stood the test of time by being an interesting place to shop and by offering the kinds of personalized service that Amazon.com cannot.

Then there are the cats. The store has had several cat mascots over the years; Poe, Dante and Savannah are the current permanent residents of the store. Several guest cats, ready for adoption, are often present, so the store has become a magnet for children and older feline lovers.

The store always has activities planned, as seen on its website, and the door is always open to those who want the unique — and timeless — experience of browsing and discovering books.