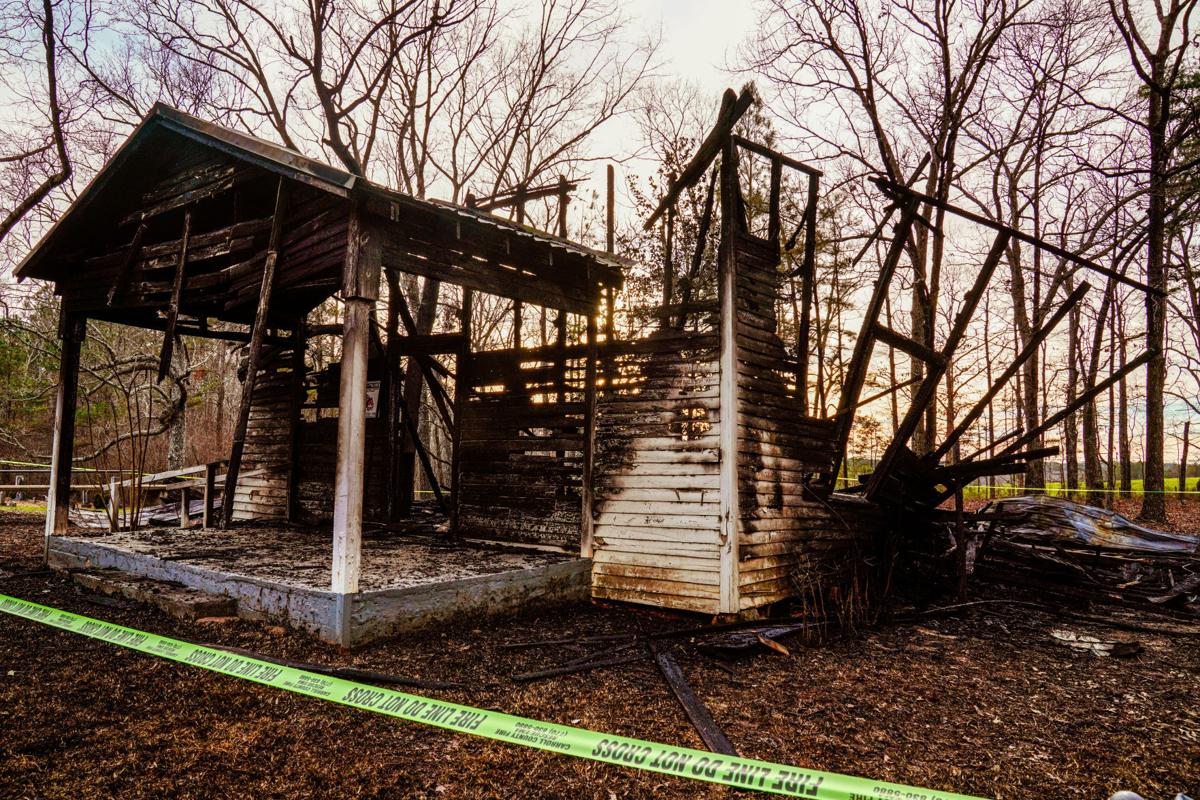 Two days after Monday’s fire, the Smith Chapel Methodist Church near Bowdon was in ruins. 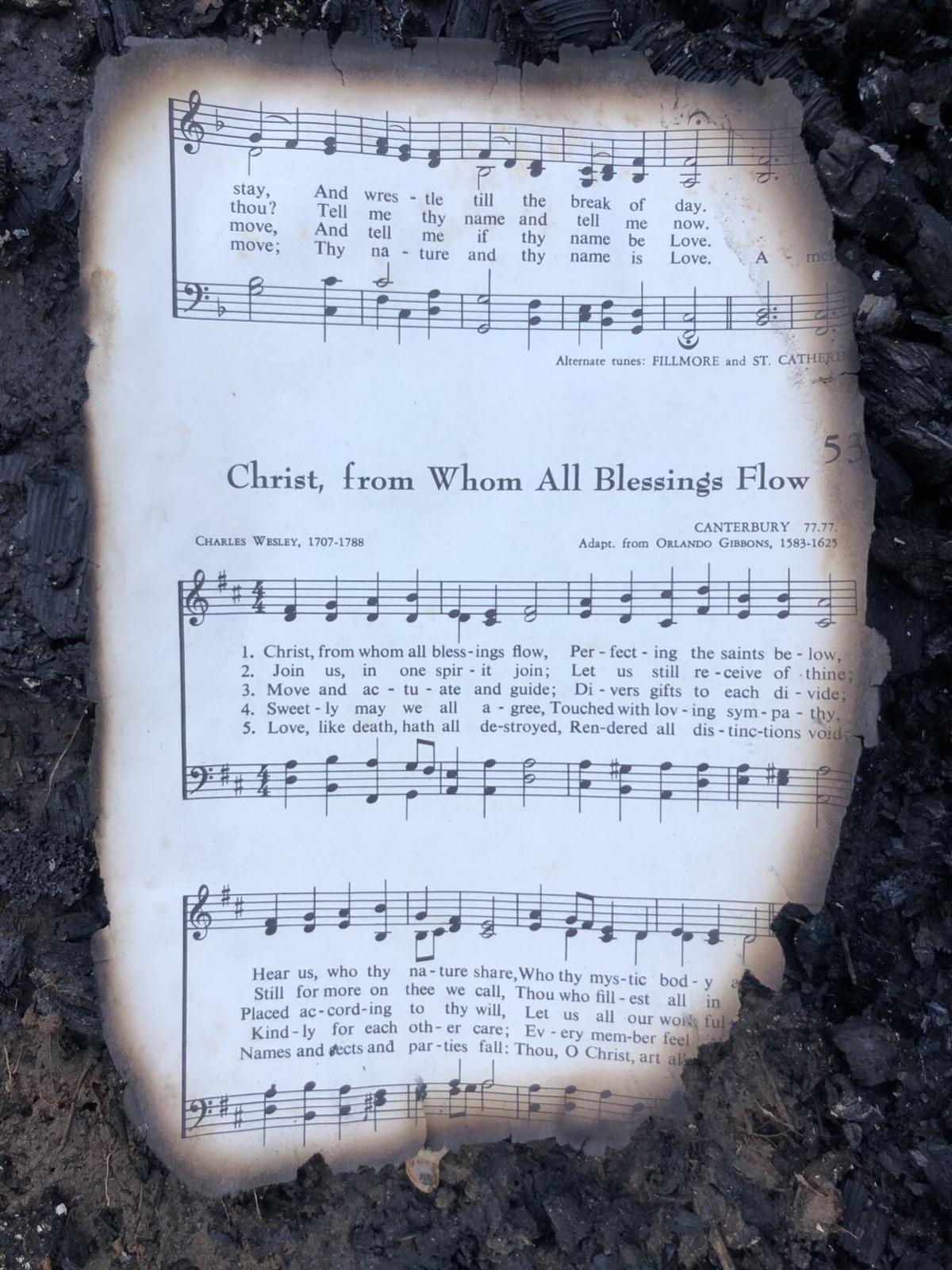 The hymn, ‘Christ, from Whom All Blessings Flow,’ survived the Smith Chapel fire, which offered an uplifting message for some Marlow family members. 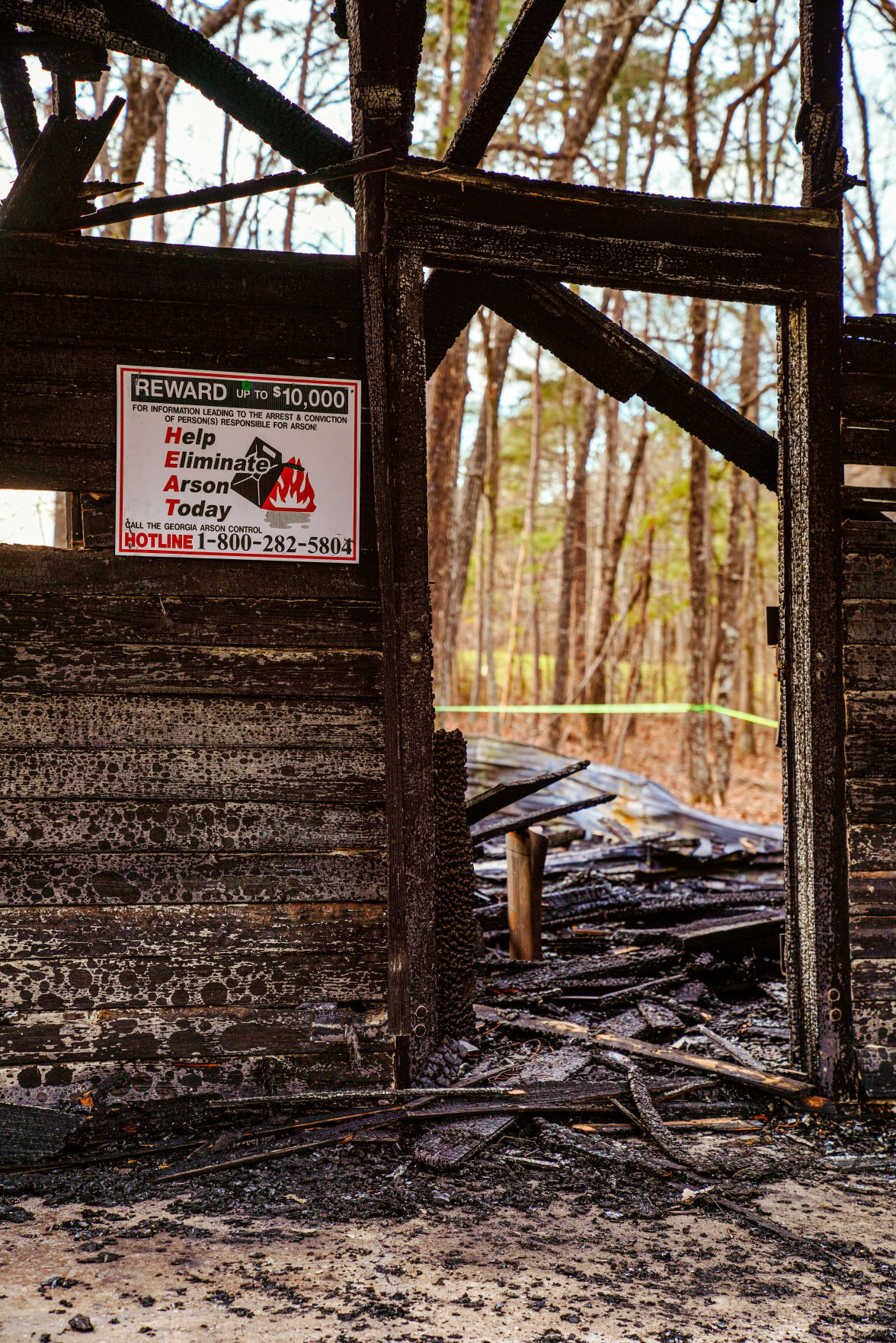 The Georgia Arson Control Hotline is offering a $10,000 reward for any information leading to the arrest and conviction of the person responsible for the arson. If anyone has any information, call 1-800-282-5804.

Two days after Monday’s fire, the Smith Chapel Methodist Church near Bowdon was in ruins.

The hymn, ‘Christ, from Whom All Blessings Flow,’ survived the Smith Chapel fire, which offered an uplifting message for some Marlow family members.

The Georgia Arson Control Hotline is offering a $10,000 reward for any information leading to the arrest and conviction of the person responsible for the arson. If anyone has any information, call 1-800-282-5804.

Before the historic Smith Chapel Methodist Church (SCMC) near Bowdon was destroyed by fire Monday, the rustic chapel was cherished by area residents.

When the fire was discovered, Hulsey said a witness saw flames coming from a pile of hymnals at the pulpit inside the chapel.

The building had no electricity or gas installed and there were pristine weather conditions at the time of the incident, all factors that rule out an accidental fire, Hulsey said.

Carroll County Fire Rescue is still investigating the fire’s exact point of origin and what may have been used as the accelerant, while the Sheriff’s Office continues to search for suspects.

Additionally, the Georgia Arson Control Hotline is offering a $10,000 reward for any information leading to the arrest and conviction of the person responsible for the arson. If anyone has any information, call 1-800-282-5804.

“It’s just a senseless loss,” said Judy Rowell, co-chairman of the Bowdon Area Historical Society. “It was a memorial in a way to Mr. and Mrs. Marlow and their desire to preserve it.”

James Emory Marlow and his wife Wilma knew each other from childhood, having grown up near Burwell “across the pasture from each other,” as Emory once told a reporter.

While his family said he had no affiliation to the church itself, he was known for his passion to rebuild and refurbish items. So in 1988, Emory and Wilma purchased the land from the SCMC trustees and began their life-long project.

Emory and his son, Dennis, would spend countless hours redoing the floors and changing windows to spruce up the building. Occasionally, members of the community offered the father and son assistance.

As Emory and Wilma grew older and their family gatherings increased in size, the couple decided to congregate the entire Marlow family and their relatives at the chapel.

Every June, more than 50 people ventured to the Smith Chapel for the Marlow Family Reunion — and sometimes the number surpassed 100. The event brought home individuals who had not been to Bowdon in years.

The potluck-style feast gathered everyone at the chapel, where they would catch-up and meet one another’s newest additions to the family. While children would play outside by the large tree behind the chapel.

“I always looked forward to seeing family that I didn’t typically see throughout the year,” Ashley Gibelli said about her previous visits to the reunion. “It was always wonderful weather ... it was a beautiful, perfect southern summer in Georgia.”

And at some point during the day, Emory would gather everyone to express his love and appreciation for the family.

Dennis said the family reunions came to an end about eight years ago when Emory and Wilma began to deteriorate in health.

Since their passing, the chapel has been taken care of by their children and remaining family.

Myric Young, the daughter of Emory and Wilma, inherited the property the chapel rested on.

Young noted that the chapel was also used twice a year as a memorial site for a different family with relatives in the cemetery, as well as a wedding venue for a handful of people.

While the chapel was not used as often as in the past, Dennis and his nephew would occasionally visit to maintain the chapel in honor of his late parents.

The family realized first-hand the amount of work Emory put into the chapel. Frequently, Dennis and his nephew would find vandalism on the property and work to fix the damages.

However much work they put in, the vandals responded equally. Young noted that vandalism had been occurring since before her parents passed away.

“I don’t understand how you’re supposed to stop people from vandalizing when nobody lives right next to it,” Young said about managing the chapel.

For years, the family would call authorities, but no vandals were ever caught at the scene of a crime.

And then on Monday the building was purposely set ablaze.

“It makes me really really mad,” Young said about the loss of her parent’s lifelong project. “I don’t understand how anybody could be mean enough to burn a building, especially if it’s a church building.”

But among the charred wood and rubble at the site, a Marlow relative found an old sheet of hymn music that survived the fire. The hymn is called, “Christ, from Whom All Blessings Flow.”

“The event was sad, but the truth that was still on this piece of paper, that was able to make it through the fire, was very touching and uplifting,” Gibelli said. “Even though it’s sad, I know Christ will be glorified through it.”