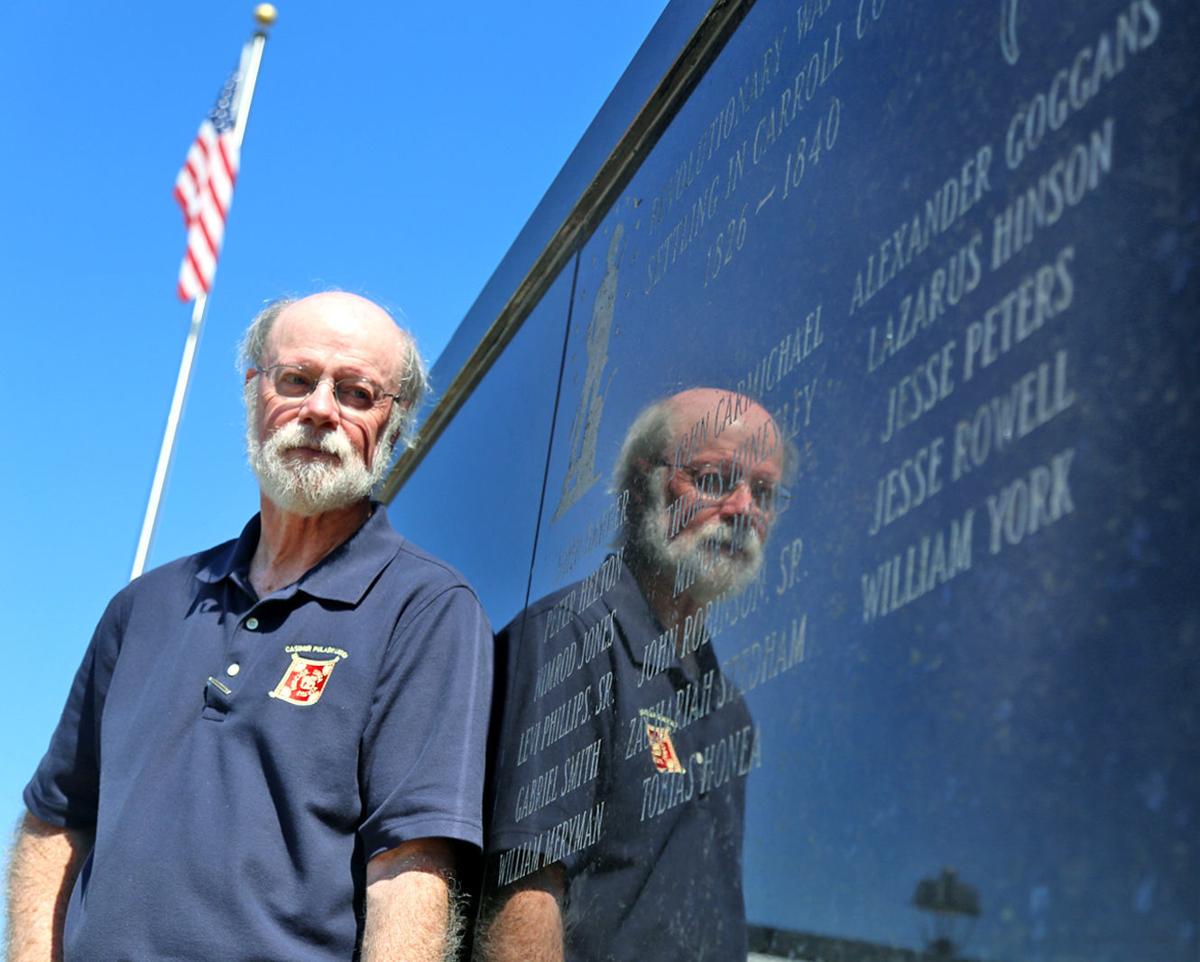 George Wheeless with the names of American Revolutionary soldiers who later lived in the frontier that became Carroll County. 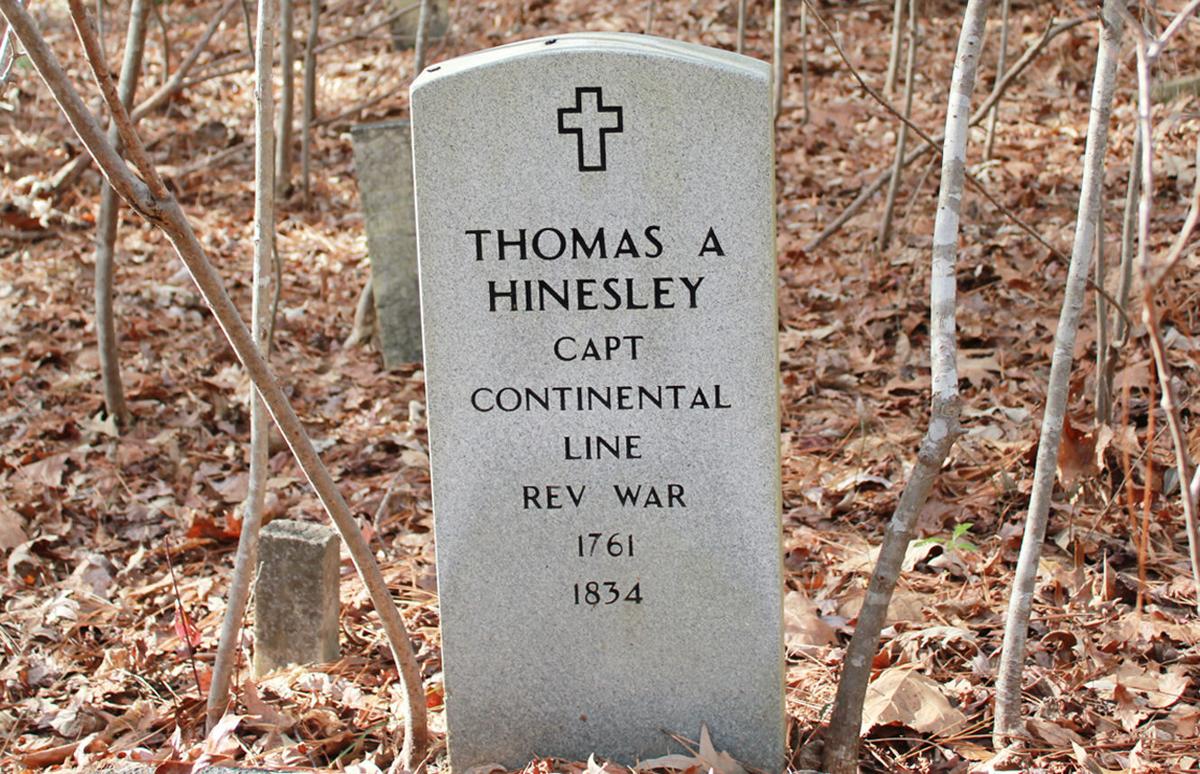 Thomas Hinesley was born in Maryland and served in the North Carolina Continental Line. He served five tours, rising in rank from private to colonel, and in 1834, he filed for a pension in Carroll County, the same year he died.

George Wheeless with the names of American Revolutionary soldiers who later lived in the frontier that became Carroll County.

Thomas Hinesley was born in Maryland and served in the North Carolina Continental Line. He served five tours, rising in rank from private to colonel, and in 1834, he filed for a pension in Carroll County, the same year he died.

Editor’s Note: A version of this article was originally published on July 2, 2017.

In America’s war for independence, there were not only uniformed soldiers of two opposing armies, there were also rag-tag militias; groups of neighbors and farmers, some who were loyal to the King of England, others who were patriots of a new American republic.

James Alexander Goggans, originally from Virginia, was one of those revolutionary Americans, and he was nobody’s sunshine patriot. Wounded in the shoulder at the Battle of Kings Mountain in South Carolina, he was injured in the leg shortly afterward. Then, during another pitched battle, he was whacked over the head with a saber and left for dead. Each time he eventually picked himself up and got back into the fight.

Forty-three years after the Revolution ended, Goggans, now 68, made his way down to Georgia. It was 1826, and the Legislature of the new state had just created a new county out of Creek lands. They called it Carroll.

Goggans was one of at least 17 Revolutionary War soldiers who moved to Carroll County in the years after the war, men whose biographies are being sketched together by local researcher George Wheeless.

A genealogist and president of the Casimir Pulaski Chapter of the Sons of the American Revolution, Wheeless and other patriotic groups have had the names of those soldiers carved in stone at the Carroll County Veterans Memorial Park. They’ve left room for more names, because Wheeless is still researching — and believes he will identify more.

About 250,000 men served as regulars or militiamen for the Revolutionary cause, but experts say there were never more than 90,000 soldiers under arms at any one time. When the war was over, these former soldiers traveled across the former colonies in search of new homes, or followed their families into the frontier. Wherever they went, they were venerated and honored for their fight to make the country free.

Wheeless’ task is more complicated than it might appear. Finding these men involves careful researching through census records, war pension applications and land deeds. What’s more, locating these people within the confines of Carroll County is difficult because the boundaries of the county have shifted and evolved.

A treaty with the Creeks signed in 1825 led the Legislature to divide former indian lands in western Georgia into five sections. In its earliest incarnation, Carroll County was pizza shaped. Its southern border followed the Chattahoochee River from near what is now Six Flags, southwesterly to what is now West Point. Its northern border stretched from Six Flags to the Alabama border northwest of Buchanan in Haralson County. Later, the territory was carved up into Campbell (later Douglas) and Heard counties, and parts of what are now Haralson and Troup counties.

Wheeless has been looking at the records of all those counties to find out more about these old soldiers, and this is what he has come up with:

Jesse Rowell may have had the most storied career of all the veterans. He served as a private in the First Regiment North Carolina Continental Line. He fought in the battles of Brandywine (September 1777) and Germantown (October 1777), both in Pennsylvania, and Monmouth (June 1778) in New Jersey. He was with Washington’s army at Valley Forge. During the British siege of Charlestown (South Carolina) in 1780, he was taken prisoner and spent the remaining years of the war in a “prison ship” in Charlestown Harbor. He died after 1840 in Carroll County.

John Barber, who was born in 1767 and served as a private in the Third Regiment, Maryland Continental Line. He filed for a pension in the State Court of Carroll County, and died after October 1840.

John Carmichael, who was originally from Pennsylvania and served in the First and Second Battalions of the Pennsylvania Continental Line. By 1836 he was living in Carroll County near present day Tallapoosa. He died in 1848.

James Alexander Goggans, who, after moving to Carroll County in 1826, briefly relocated to Alabama, then returned here, where he became active at what is now Bethany Christian Church on the Carrollton-Villa Rica Road. He was buried there in 1852.

Peter Helton, who was born in North Carolina and served as a first lieutenant under that state’s forces commanded by Gen. Nathaniel Greene. He was severely wounded three times in the Battle of Eutaw Springs (September 1781), which left him permanently disabled.

Thomas Hinesley, was born in Maryland and served in the North Carolina Continental Line. He served five tours, rising in rank from private to colonel, and in 1834, he filed for a pension in Carroll County, the same year he died.

Lazarus Hinson, born in Virginia, also served in North Carolina as a militiaman. He was at the Battle of Camden, South Carolina (August 1780), though saw no action.

Nimrod Jones, like some of these other soldiers, was granted land in a state lottery that divided up former Creek and Cherokee lands. The state allowed him three draws in the lottery, based on their oath that they had served in the Revolution. His draw brought him to Carroll County, where he was elected coroner in 1843.

Minor Mead entered military service in the Sixth Regiment of Virginia militia. The 1830 census showed that he was living in Carroll County, and he died here on March 25, 1837.

Jesse Peters was already in Georgia when the war began. He served as a private in the Third Georgia Continental Regiment and was present at three battles in east Georgia and South Carolina. He filed for a pension in the State Court of Carroll County in 1832.

Levi Phillips, Sr. was born on September 20, 1751, in Cecil County, Maryland. He was living in Rowan Co. North Carolina when he enlisted in a regiment of the Rowan County Militia. In 1828 he was living in Carroll County where he applied for a pension in the State Court of Carroll County in 1831. He died January 14,1840.

John Robinson, Sr. was born on July 11, 1752, in Hanover County, Virginia. When the Revolutionary War started, he was living in Chatham Co. North Carolina. He served in the Fourth and Fifth regiments of the North Carolina Militia.

Gabriel Smith was born in Montgomery County, North Carolina, on December 12, 1764. He served in the Montgomery County Regiment of Militia. In the fall of 1781 he was taken prisoner by some Tories (British loyalists), but after about 3 weeks he escaped. He died in Carroll County in 1841.

Zachariah Stedham was born in 1751 in South Carolina. He served with the South Carolina Troops under the command of Col. Wade Hampton and General Nathaniel Greene. He fought at the Battle of Eutaw Springs, where he was wounded in the face and lost sight in his left eye. He died after 1840.

William York was born in 1755 probably in North Carolina. He enlisted in September of 1776 as a private in the First Regiment North Carolina Continental Line. He fought at the battles of Moore’s Creek Bridge (North Carolina), Brandywine, Germantown, and Monmouth, then was taken prisoner at the Siege of Charlestown in 1780. William died in Carroll County on July 14, 1837.

William Meryman was born in Virginia, but was living in Granville County, North Carolina, when the Revolutionary War began. He enlisted in the Caswell County Regiment of Militia and fought in the Battle of Guilford Courthouse (March 1781) in North Carolina. In March of 1834 he filed a petition for a pension in the State Court of Carroll County.

Tobias Honea (pronounced Honey) was born in North Carolina and enlisted as a private in the New Bern District Brigade of Militia. Over the course of the war, he served in three other militia units in eastern North Carolina. Tobias died about December 25th 1840.

Although the territory that is now Carroll County was owned by the Creeks and was far from the cockpit of war during the Revolution, it became home — sometimes briefly — to these soldiers, who sought new lives in the land they had set free.