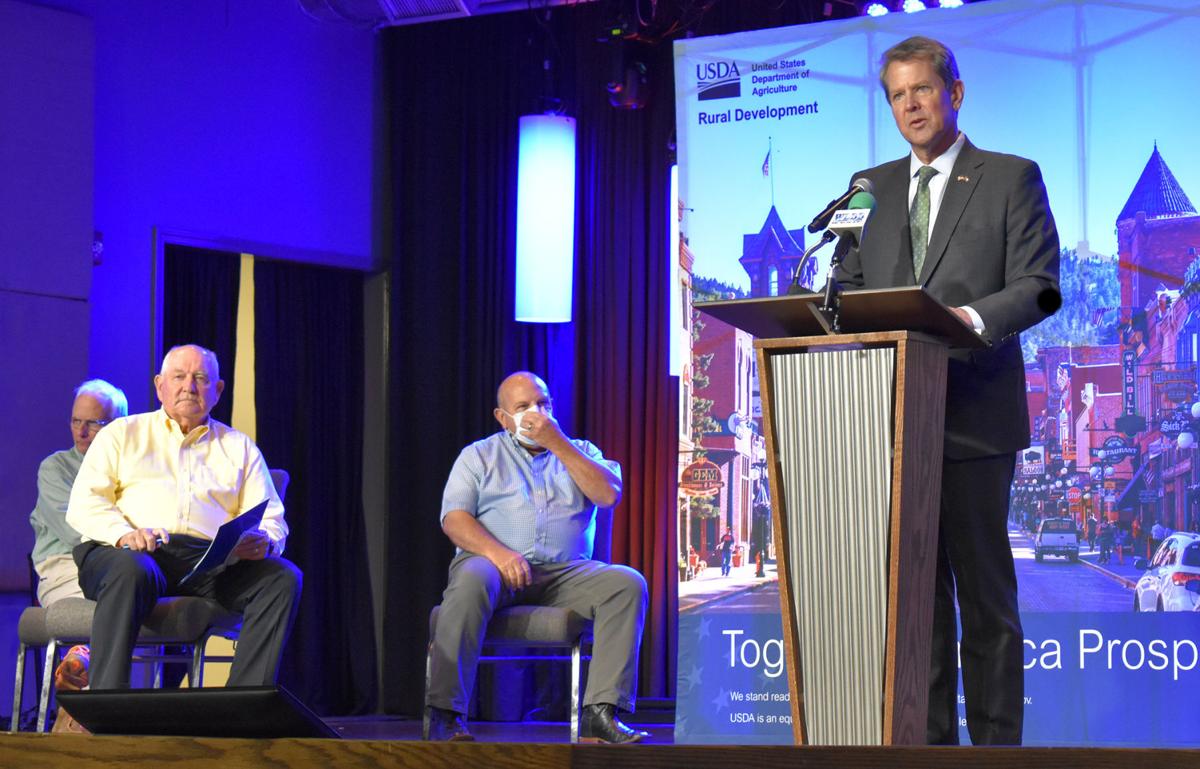 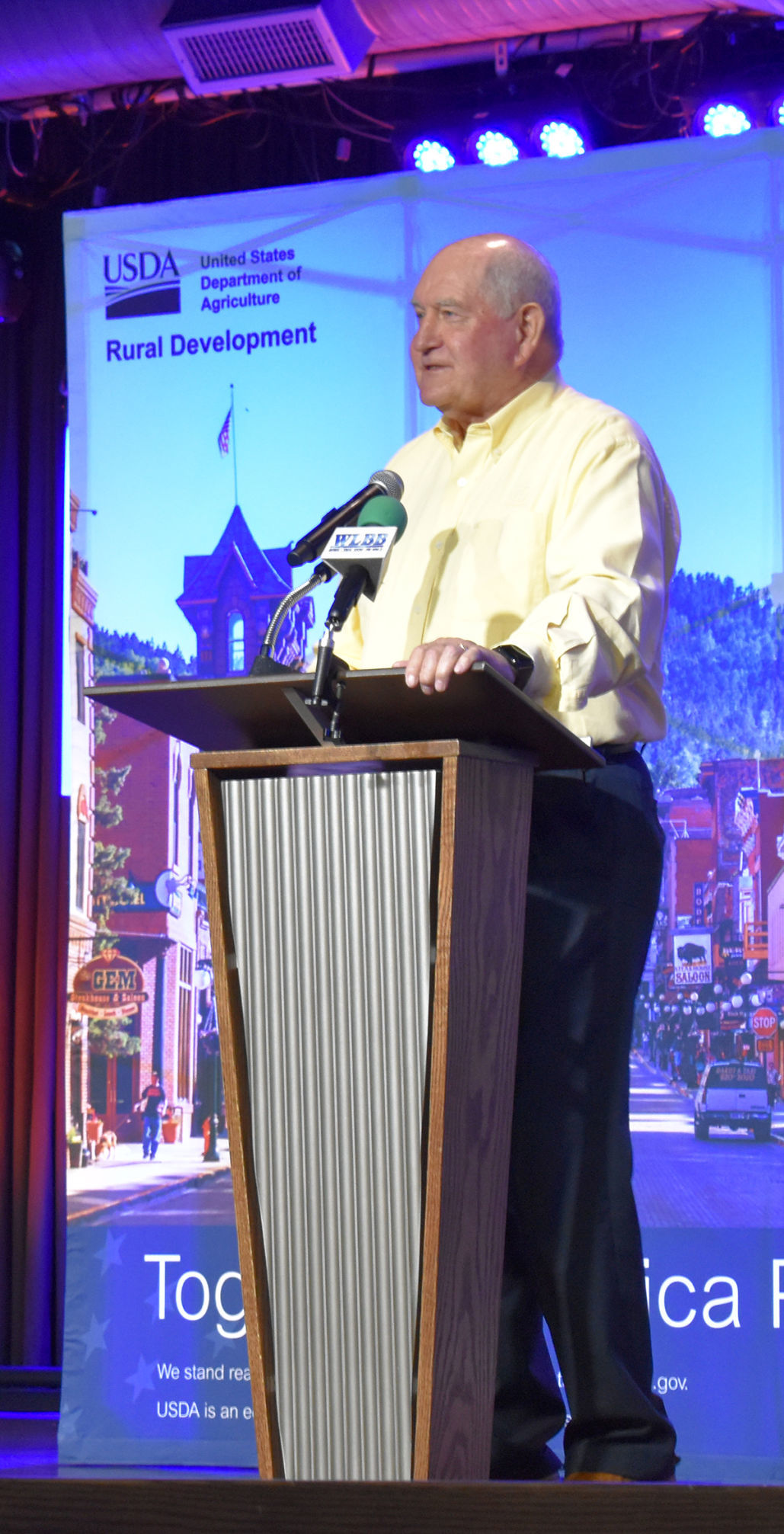 U.S. Secretary of Agriculture Sonny Perdue speaks Thursday at the Mill Town Music Hall in Bremen about the ReConnect Program. 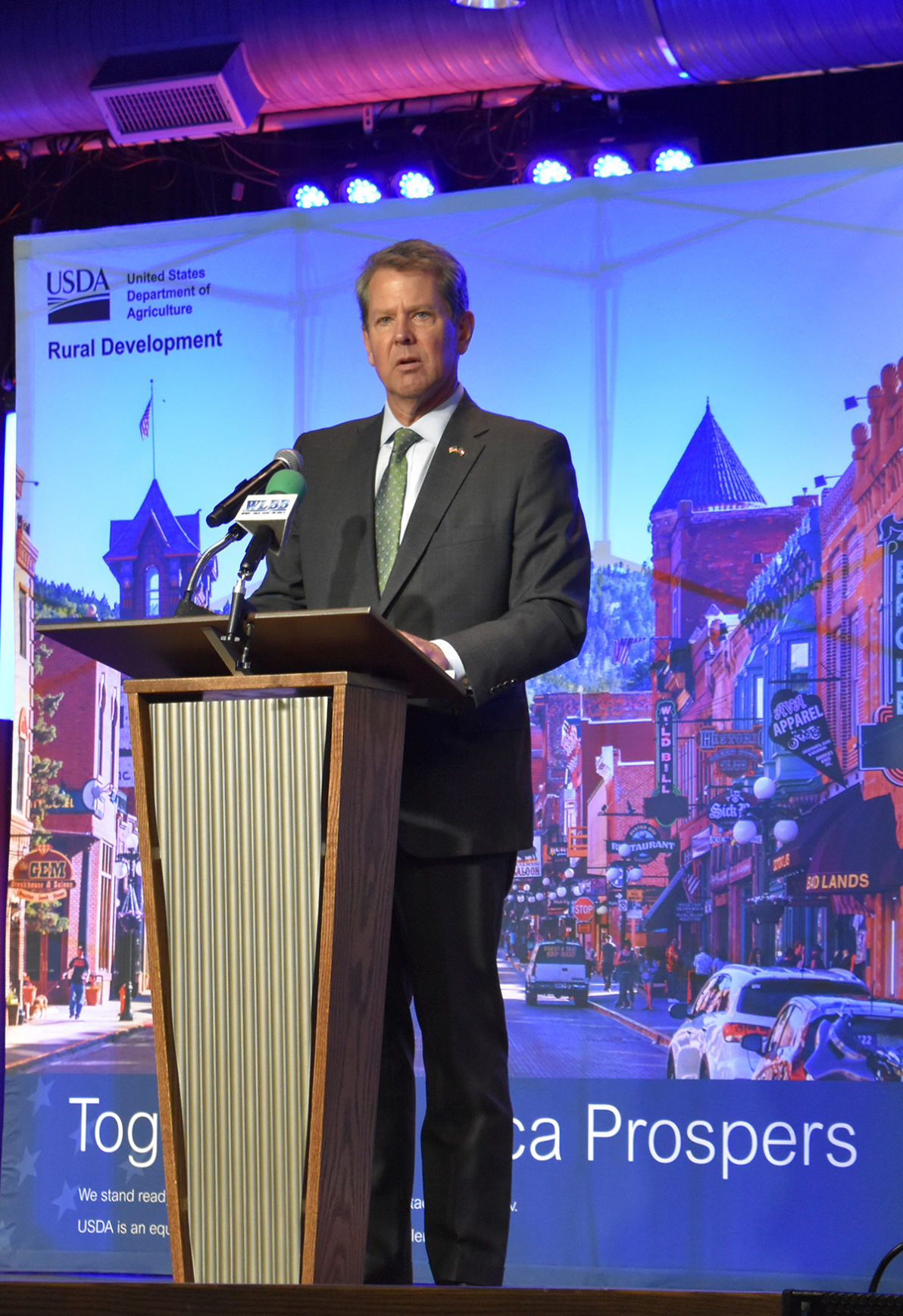 Gov. Brian Kemp said Thursday that the past few months have proved how crucial broadband access is for rural areas of the state.

U.S. Secretary of Agriculture Sonny Perdue speaks Thursday at the Mill Town Music Hall in Bremen about the ReConnect Program.

Gov. Brian Kemp said Thursday that the past few months have proved how crucial broadband access is for rural areas of the state.

SyncGlobal and Carroll EMC on Thursday announced a partnership that is designed to bring fiber-based broadband service into parts of Carroll and Heard counties within a year.

Bremen-based SyncGlobal and Carroll EMC announced a plan to invest $12.5 million to construct a fiber network in the extreme southern part of Carroll County and northwestern Heard County.

This announcement was made after telecommunications giant Comcast announced on June 12 a similar upgrade of its broadband service in Tallapoosa, Waco, Mount Zion, and Whitesburg — a service area that extends westward into Roopville.

“To say this is a long time coming is an understatement,” said Kyle Williamson, CEO of SyncGlobal. “If we keep our families together, we keep our culture together and we keep our communities together. This project, to me, is about bringing America back to rural America.”

Martin said the study showed that two-thirds of the members served by the electric cooperative did not have broadband access.

“I don’t believe it’s much better today,” Martin said. “It (the study) also said it would be a good idea for Carroll EMC to find a broadband partner. Fortunately for us, we have a partner right here in our own backyard. We believe this project will be a springboard for other projects, and it can be a model for this state and around the country.”

SyncGlobal received $12.5 million in grant funds from the USDA Broadband ReConnect Program, according to a statement released late Thursday by CEMC. Coupled with matching funds between SyncGlobal and CEMC, the initial capital investment will amount to almost $20 million for the first stage of deploying broadband.

These funds, the utility said, will help to begin the extensive process of hanging fiber along Carroll EMC’s infrastructure. The project is slated to begin immediately upon authorization from Rural Utilities Service, a subdivision of USDA.

Duvall said he represents six million family farmers across the country and added they are struggling because of the coronavirus. Having broadband access, he said, will help these farmers run their equipment and receive data about when, where and how to plant crops.

“This is not just a celebration, but a step in the right direction,” Duvall said. “It is so important in our time. I compare what is going on with broadband spreading across America to what happened with electrification. What electrification was to my dad and grand-dad is what broadband is to us.”

He said one out of four rural Americans have access to broadband compared to the two out of 100 urban residents.

“It’s not just something nice to have today, it’s a necessity,” he said. “Not just for our farms, but for children and healthcare. How can we think of sending our children to a four-year college where he has the best internet and think he is going to come back home to a rural community and live the rest of his life? They are not going to do that.”

Carroll County Commission Chairman Michelle Morgan said that while the project will affect only a small portion of the county, it enters some of the “most underserved areas.”

A service-area map released by SyncGlobal showed that the initial service in Carroll County would be along the areas bordering with Heard, extending on the east side of Highway 27 into the Lowell area.

“Enterprise and utility systems are always quicker to expand than implement, so I’m confident we’ll see this fiber reach other areas of our county and up into Haralson, Paudling, and Polk counties sooner than later,” Morgan said in an email statement. “I am very appreciative to Carroll EMC for furthering their commitment to serve the citizens of Carroll County.”

Chad Rupe, the USDA’s Rural Utilities Service administrator, said SyncGlobal and Carroll EMC will be running “high-speed, gig-level” service out to about 2,800 households within a 125 square mile service area.

The Broadband ReConnect Program, which gives grants and loans to construct, improve or acquire facilities and equipment needed to provide broadband service in eligible rural areas.

To be eligible for these funds, the proposed service area must meet criteria such as lacking sufficient access to broadband or being in a rural area, according to the USDA website.

At least 90% of households in the proposed area must lack access to broadband service of at least 10 megabits per second downstream and 1 megabit per second upstream.

The USDA defines a rural area as one that is not located in a city, town, or incorporated area and has a population of more than 20,000 residents. The area cannot also be adjacent to a city or town that has more than 50,000 residents.

“We’ve been doing these all over the country,” Perdue, a former Georgia governor, said. “But it’s just like the old saying, ‘there’s no place like home.’ We need it here. We need it everywhere.”

Gov. Kemp signed Senate Bill 2 in 2019 to allow EMCs across the state to collaborate with internet service providers to create broadband access, he said.

“It’s pretty clear that we all have a commitment to help increase rural broadband access for economic growth, educational opportunities and now, more than ever, healthcare access,” Kemp told the crowd at Mill Town Music Hall. “We’ve certainly seen how crucial that is in recent months for families across this state.”