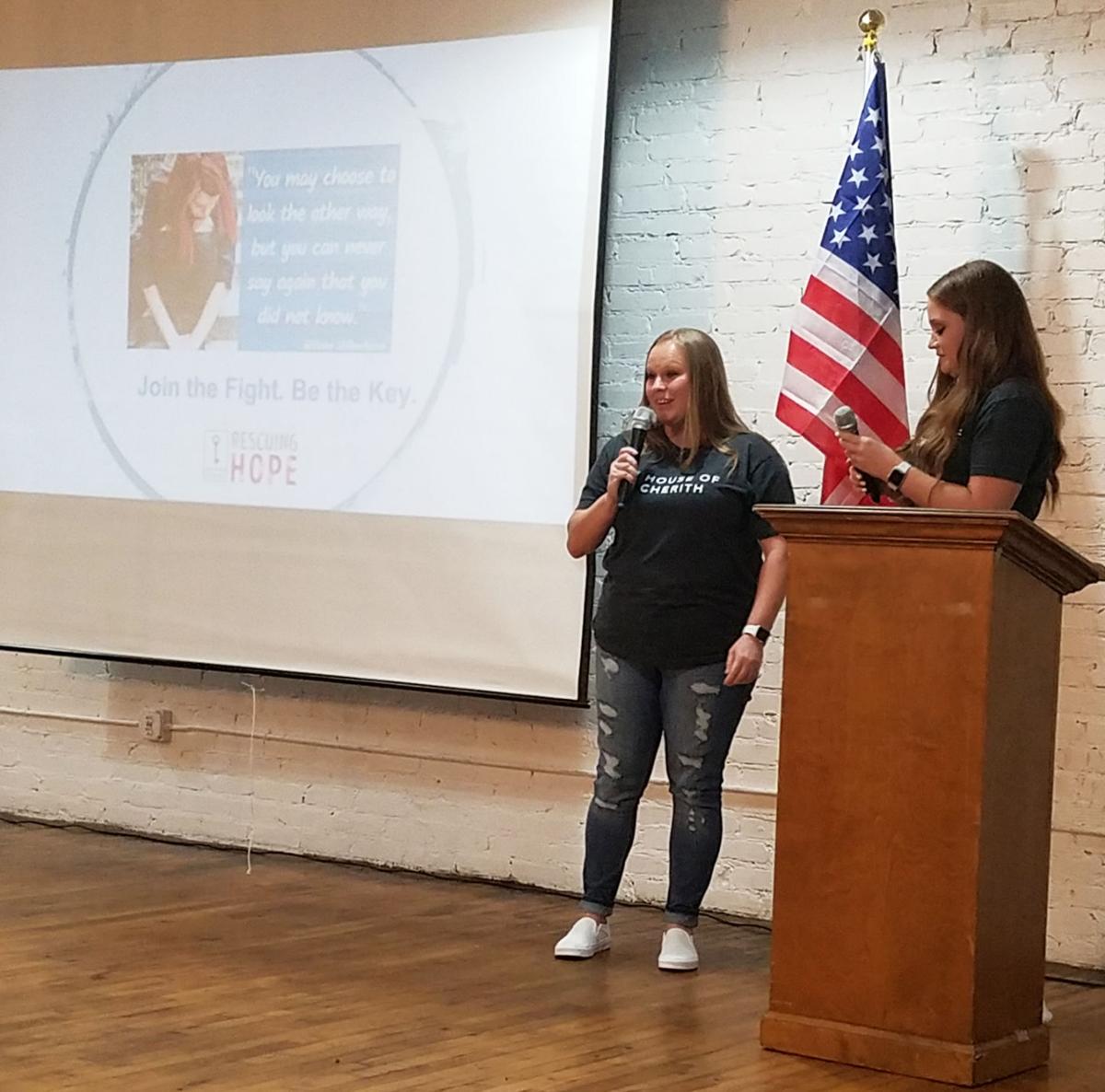 Katrina David, a small-town Georgia girl and survivor of human trafficking, told her story to a crowd of nearly 200 at a sex trafficking awareness program in Bremen on Monday. 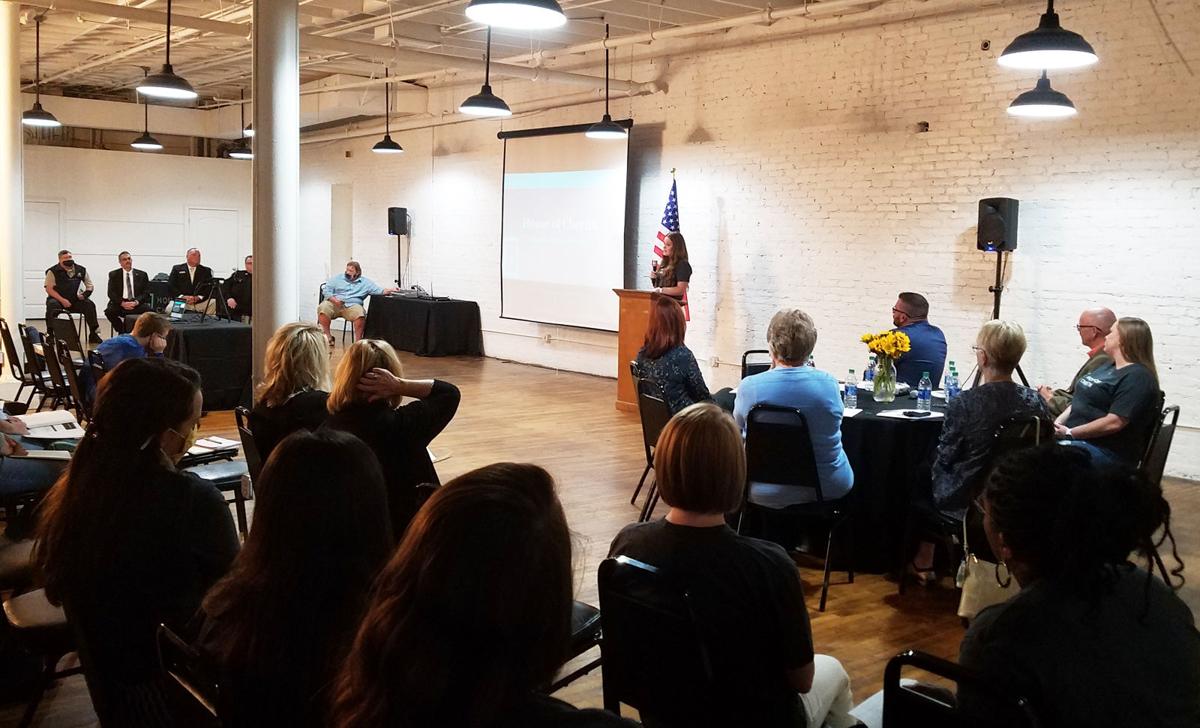 Kelsi Deel, executive director of House of Cherith, an organization that offers housing and support services to women escaping human trafficking, was one of a number of speakers at a program designed to increase awareness of sex trafficking. The program was sponsored by the city of Bremen, Bremen Police Department, Bremen Junior Woman’s Club, LifeGate Church in Bremen and Covenant Life Church.

Katrina David, a small-town Georgia girl and survivor of human trafficking, told her story to a crowd of nearly 200 at a sex trafficking awareness program in Bremen on Monday.

Kelsi Deel, executive director of House of Cherith, an organization that offers housing and support services to women escaping human trafficking, was one of a number of speakers at a program designed to increase awareness of sex trafficking. The program was sponsored by the city of Bremen, Bremen Police Department, Bremen Junior Woman’s Club, LifeGate Church in Bremen and Covenant Life Church.

Sex trafficking doesn’t always look the way people expect, said experts at a program held in Bremen on Monday to increase awareness of the problem.

Katrina David, a trafficking survivor, was used by her mother in small town Georgia.

“She would use me as bait. She would feed me drugs.” David said of her mother. “It was hell.”

Her husband of 12 years continued the abuse. He used her three children to control David and keep her from leaving. One day though, she did. But having nowhere else to go, David returned to her mother. Her mother now had three new weapons to abuse David; she would use her children to force David to do what she wanted.

“I had to turn them over to my ex-mother-in-law, which was the safest place them because my family...,” David said, not finishing the sentence.

Her mother completely cut David off from her family. David felt so hopeless, she tried to kill herself multiple times. Then one day, she was able to steal her mother’s phone and contact her sister for help.

Her sister, who lives in California, knew someone at City of Refuge in Atlanta and Rev. Bruce Deel. Deel and the City of Refuge had founded House of Cherith to offer housing and support to women escaping sex trafficking. Her sister threatened their mother with the police, and their mother released David. Then her sister took David to Pastor Deel.

David spent two and one-half years at House of Cherith in Atlanta. It wasn’t easy. Like many survivors, she felt a responsibility to her abusers and left House of Cherith at one point to return to her mother. But she stayed with her mother just a week.

“Whenever I came back, it was totally different,” David said of her mother’s home. “I knew that life there, it was no more. It was time for me to engage and get the healing I needed at HOC. The safety.”

Three years after her escape, David now has a job, a car, her own apartment. She reunited with her three children, the oldest of whom is in the U.S. Army, said Kelsi Deel, executive director of House of Cherith.

“This is one of the most beautiful stories of transformation,” Deel said.

The widespread industry of illegal sex

“You know that there were a lot more that weren’t confirmed and tons and tons of adults,” said Crystal Burdette, operations manager for Rescuing Hope, a Cobb County organization that works toward eradicating sex trafficking and educating the public about the problem.

According to the U.S. State Department, 600,000 to 800,000 people are trafficked across international borders every year. The majority, 80%, are women and 50% are minors. In Atlanta, considered one of the top three cities in the United States for sex trafficking, the illegal sex industry brings in nearly $290 million a year.

Sex trafficking may be prevalent in Atlanta, Burdette said, but it happens everywhere from small towns to large, from trailer parks to mansions. Where you have the internet and the interstate, you have sex on demand, she said. Traffickers will set up along the interstate and notify their customers via the internet where to come.

It happens at convention centers and at sporting events, Burdette said.

“Anywhere there’s a lot of people gathered, you’ll find traffickers there looking to make a buck,” she said.

And sex trafficking happens right in town. Those strip clubs with women doing a dirty job to put themselves through college — those are only in the movies, Burdette said.

“The majority of them are controlled by pimps or gangs,” she said.

Sex traffickers use whatever they can to control “their property.” They will give them drugs to keep them coming back. They will use psychological, emotional and physical abuse. They will tattoo or brand them as their property. They will isolate the men and women to trap them and make them dependent.

Burdette said that one sex trafficker had said that if you promise a girl heaven, she’ll follow you to hell. That’s how they operate, she said.

“Of all of the federal cases of trafficking in 2019, only 5% involved the victim being physically restrained. So, this I think, is the hardest thing for people to get over,” Burdette said. “If you get nothing else out of this, I would just say please understand, that the complex trauma that they go through, the physical, the mental, the emotional stress is as powerful as any chain that’s going to tie you to a pole.”

Those who are being trafficked are out in public, but people often don’t recognize what they see, she said.

So, Rescuing Hope offers training for law enforcement, first responders, medical personnel and educators to recognize the signs of trafficking.

For the general public, it’s important to watch children, grandchildren and even adult family members. Be careful about internet use — some people have been lured by traffickers with bogus job offers, through chat rooms or even video game apps.

Be a mentor or confidant for an at-risk youth, she said. Donate or volunteer for one of the ministries that help trafficking survivors. Share what you know. And finally, if you see something that doesn’t look right, call the sex trafficking hotline 1-888-3737-888 or text BeFree (233733) or call 911.

Kelsi Deel, the daughter of Pastor Bruce Deel, said she was 13 when she decided she would fight for the victims of trafficking.

“This young lady walked into the church ... she told me her story,” Deel said. “I don’t remember her name. I don’t remember the details. But I said at that moment, this is what I’m going to fight for the rest of my life. No woman should ever have to be victimized at the hands of another human being.”