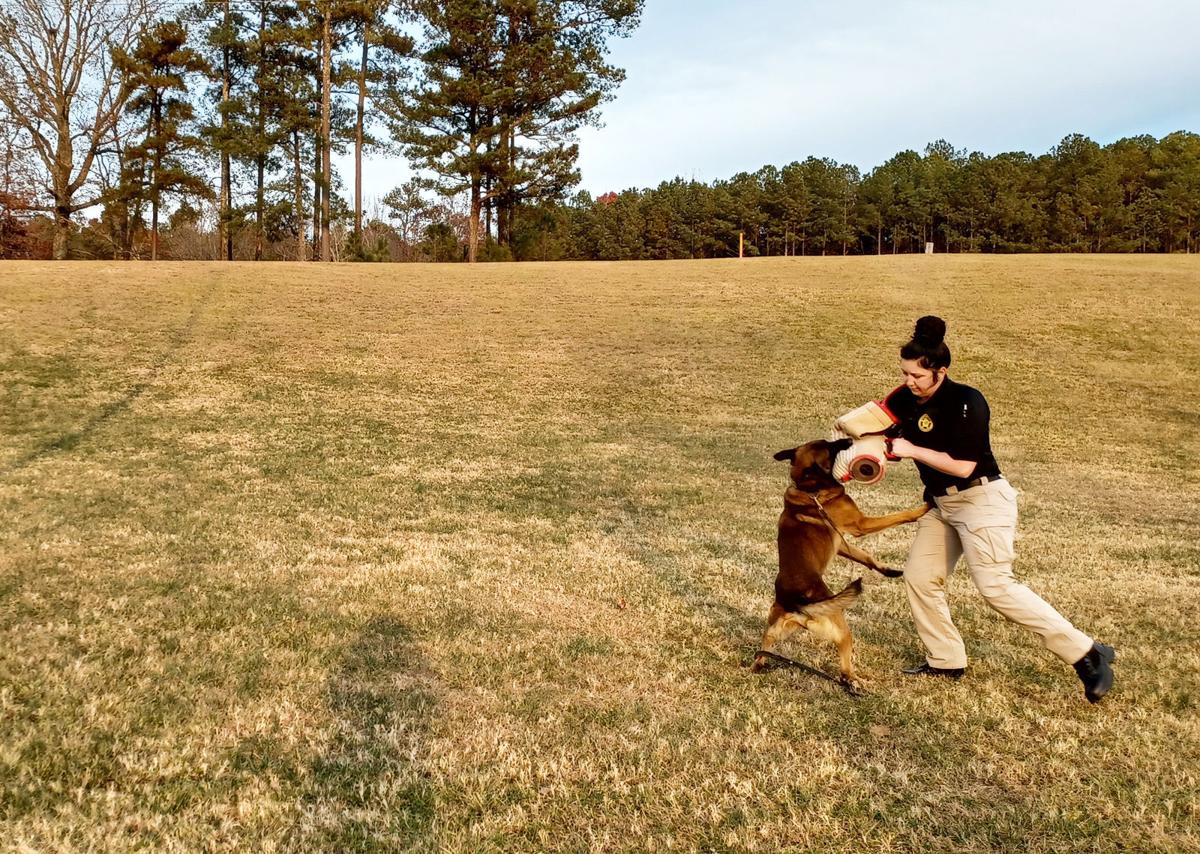 Deputy Jordan Barnett helps train Janco, who has been working with the Haralson County Sheriff’s Office since last year. 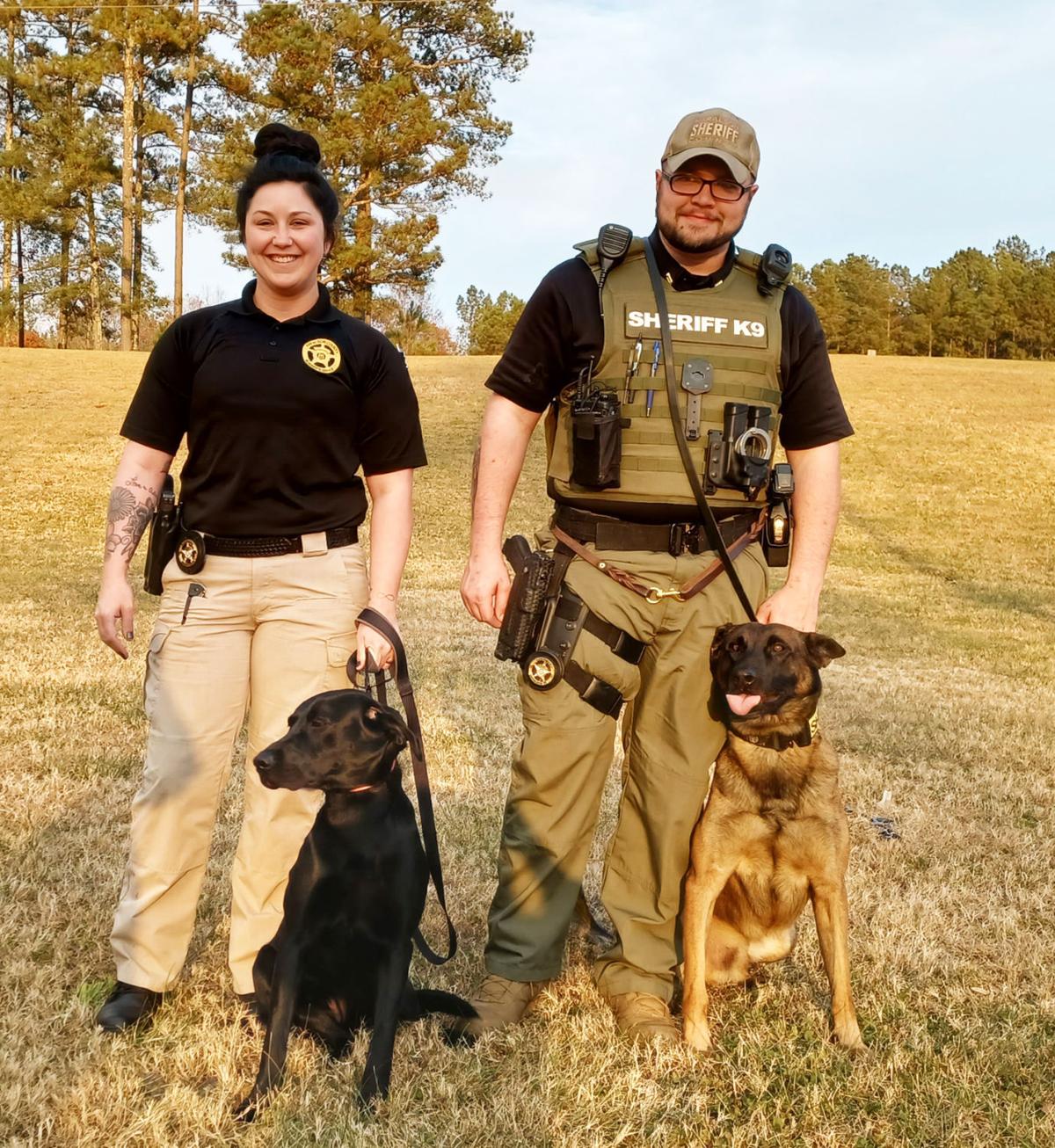 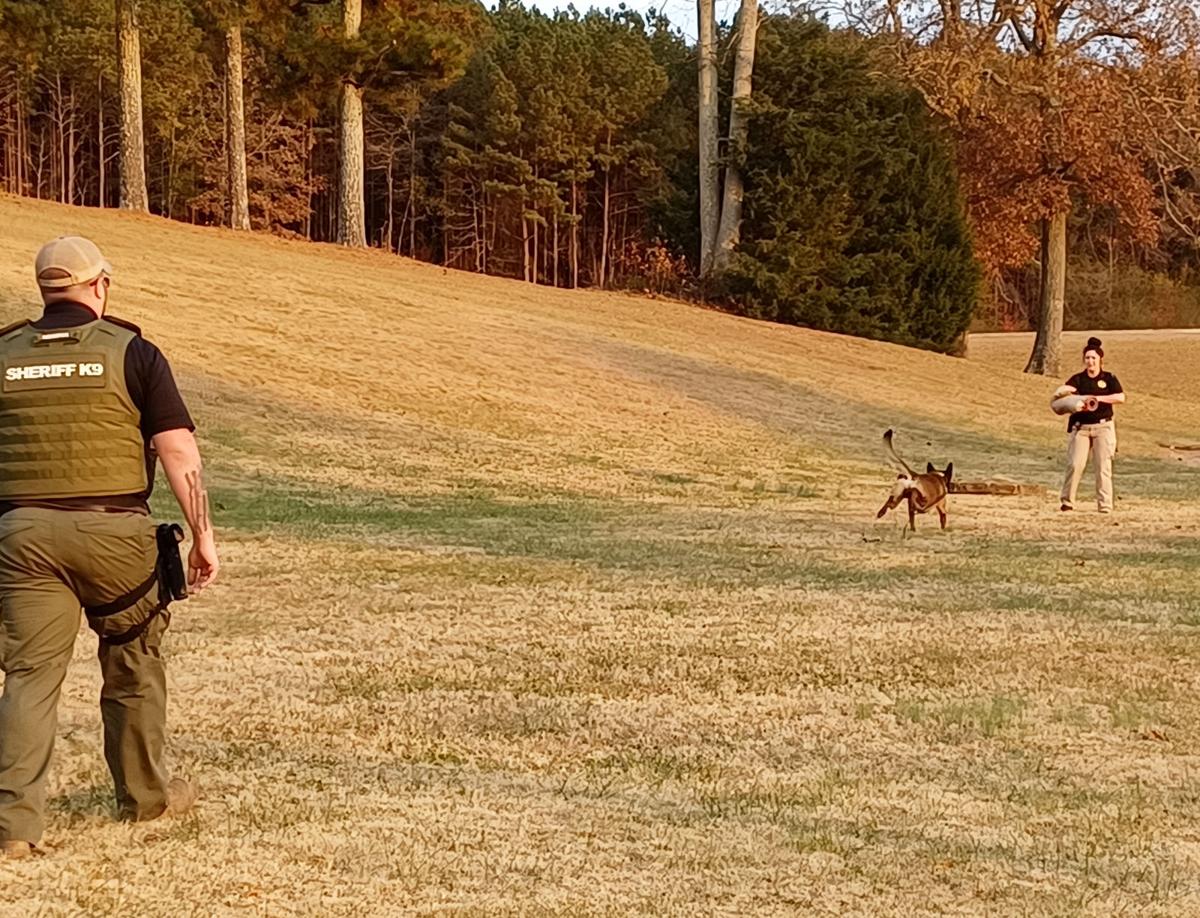 Deputy Jordan Barnett helps train Janco, who has been working with the Haralson County Sheriff’s Office since last year.

“Sheriff’s Office canine. Stop or I’ll send my dog and you’ll be bit.” Those words, or words like them, are becoming more common locally as more law enforcement agencies are bringing K-9 officers into their ranks.

All four of the law enforcement agencies in Haralson County have had K-9s at some point, but currently only the Haralson County Sheriff’s Office has one on duty. But the Bremen Police Department, which had a K-9 retire about a year ago, is looking to add two new dogs to the force while the Sheriff’s Office is looking to expand its four-legged force.

The Haralson County Sheriff’s Office was given a black labrador puppy, a future K-9, said Haralson County Investigator Heather Mecillas. After she receives her training, she will join K-9 Deputy Janco, a Belgian Malinois, who is already on the job at the office.

“These dogs are so important,” said Investigator Heather Mecillas. “Not just for the bites and take somebody down to protect the deputies’ lives.”

The dogs aid in tracking people either lost or fleeing; they can detect drugs or find items such as discarded weapons. The dogs are an invaluable resource, Mecillas said.

Recently, Janco and his handler Corporal Josh Hooper stopped a car for reckless driving, but when Janco located methamphetamine in the car, it ended in drug charges, she said.

“Canines can detect odor that humans cannot,” Hooper said. “When me and you, say we walk into a pizza restaurant, we smell the pizza cooking. When a canine walks into the same restaurant, they smell each individual ingredient. They smell the garlic. They smell the bread, the yeast, the cheese.”

In the same way, the dogs can sift through the odors at a traffic stop and smell the narcotics in the vehicle, he said.

In addition, the dogs add a layer of safety for law enforcement when entering unknown areas. For instance, a dog can find a hiding person in a building and and keep them from surprising an officer or deputy, he said.

The office is adding a second dog in order to have a K-9 available on both shifts, Mecillas said.

Deputy Jordan Barnett will be the second K-9 handler at the Sheriff’s Office. The dogs and the handler are a pair on and off the job, and the dog lives with the trainer. She’s been living with Tora since October.

“We’re just still kind of getting acclimated to each other and she’s getting used to being in the back of the patrol car and used to my driving,” Barnett said.

She doesn’t go out on calls yet, Barnett added.

Tora will first be evaluated by a trainer, then get basic obedience training. Then, Tora and Barnett will get four weeks of police training, she said. After all that, she will be ready to join the force.

Tora will be a tracking and narcotics dog, Barnett said. She will not be used for criminal apprehension, Barnett said. Instead Tora will be used as a community outreach tool, showing children at schools or older residents at nursing homes her skills, “just putting a different face on law enforcement,” Barnett added.

Bremen police Chief Keith Pesnell said the K-9 program is very important to the Bremen Police Department and for the community and he’s been working to replace the retired K-9 for a while now.

The dogs, whenever they are ready, will also be used in the schools, particularly since dogs and kids are a natural partnership, Pesnell said.

Pesnell is not sure when the dogs will be ready for their new job. It can take months for evaluation and training, both for the dogs and their human partners.

Mose Hugghis, a trainer from Powder Springs, has been training dogs for 30 years and police dogs since 2006, he said.

“I started seeing a lot of the handlers, and the dogs, needing to find new ways to motivate the dogs,” Hugghis said. “I had a knack to read the dogs and put the handler and the dog together to make a super team.”

It is an investment for both the law enforcement agency and the handler. But the handlers get into it because they love dogs, both Haralson County handlers said. They both tried out for the job, Barnett and Hooper said.

“I love it; it’s one of the greatest things I have accomplished in my career,” Hooper said. “It benefits my family because they have a dog to love on a dog that protect them at home. Me, it gives me a partner to ride around with me for a 12-hour shift. He’s my best buddy.”

“It’s a challenge,” she said. “She’s little; she’s only 9-months-old. …She loves chewing on shoes so she’s torn up a bunch of my flip-flops. But we’re getting through it.”

Her kids love to play with Tora, Barnett said. But when it’s time to go to work, Tora, although she hasn’t been trained yet, knows it’s time to get in the car and go.

Kyle Briley, founder of the Georgia Police K-9 Foundation, said that there are about 1,000 dogs working in law enforcement in the state at any given time and they are becoming more popular as their contributions are highlighted.

“K9s play a vital role in everyone’s life, whether they know it or not!” Briley wrote by email “Think about when you are traveling or attending a sporting event or at a theme park or going to a concert or large event...most likely a K-9 was there or is there to help keep the crowds safe from any potential danger. We also have K-9s that can find missing endangered persons such as the elderly or children. You can’t put a price tag on a K-9 locating a missing child or person that is in danger. K9s also protect us from some of the most violent criminals out there and there are many cases and stories that K9s across the state of Georgia have that have assisted in taking bad people off the streets.”

That also means that the needs for resources for the handlers and the dogs are becoming more important. That’s why Briley founded the Foundation.

“We provide assistance in many areas such as — getting K9 protective (“bullet proof”) vests, heat alarms systems, training equipment, training, medical kits, narcan, retirement assistance and much more,” he wrote. “We have been able to provide over 120 protective vests, 60 heat alarms and in total over 1,500 K9s have been impacted by our mission.”

Haralson County Sheriff Stacy Williams had nothing but good to say about the dogs. He is excited about getting another dog on the force to have both shifts covered with a dog. The dogs are a great asset to the office, he said.

“We love our dogs!” Williams said.