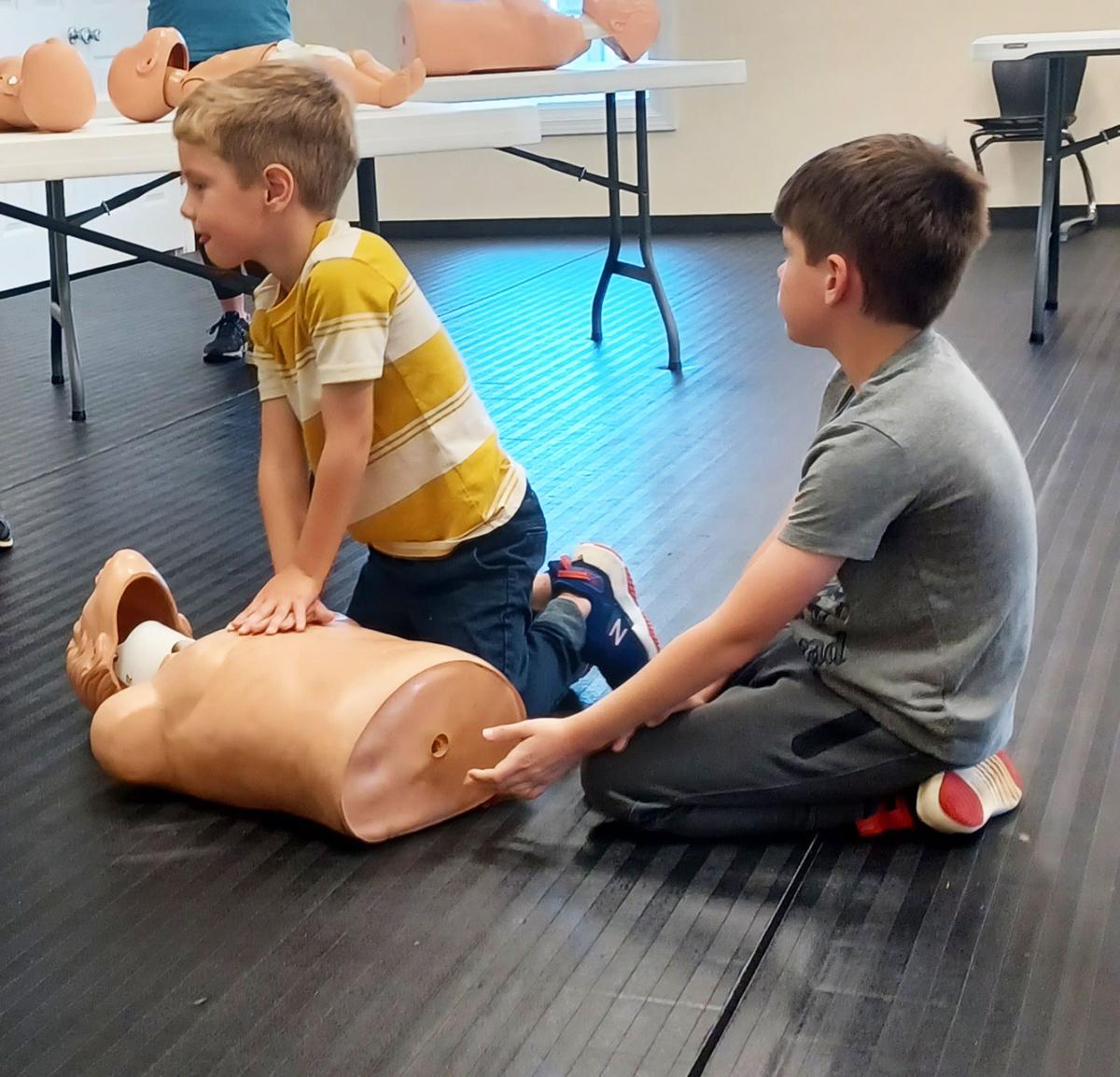 Dalton Bush, 5, and Shepherd Bush, 7, were two of more than a dozen people who took a CPR class from Carrollton firefighter Bill Lambert on Saturday at Heart Awareness Day in Buchanan. 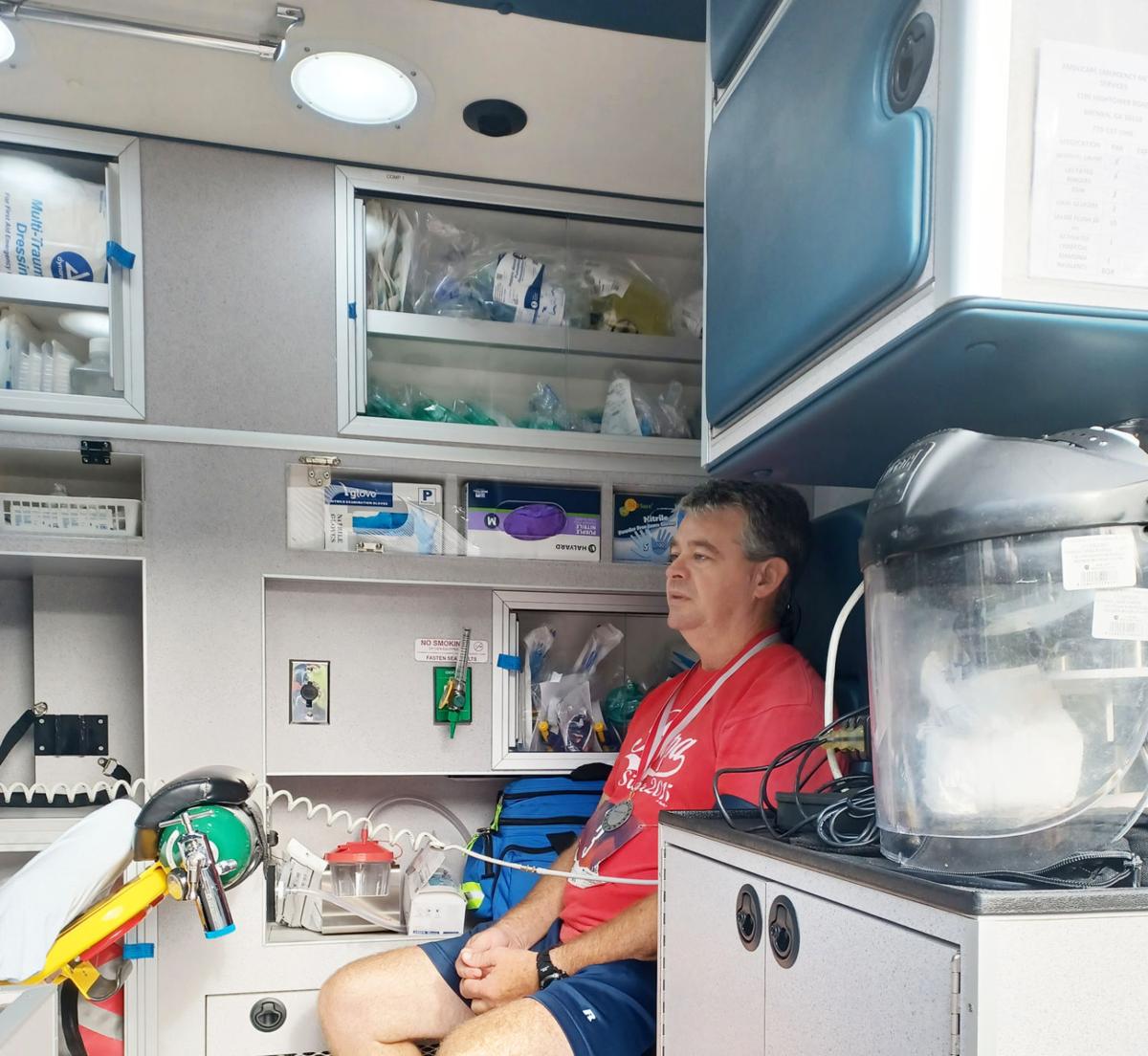 Joel Agan had his blood pressure taken by Ambucare after running the Heart and Sole 5K and before giving blood Saturday at Heart Awareness Day in Buchanan. 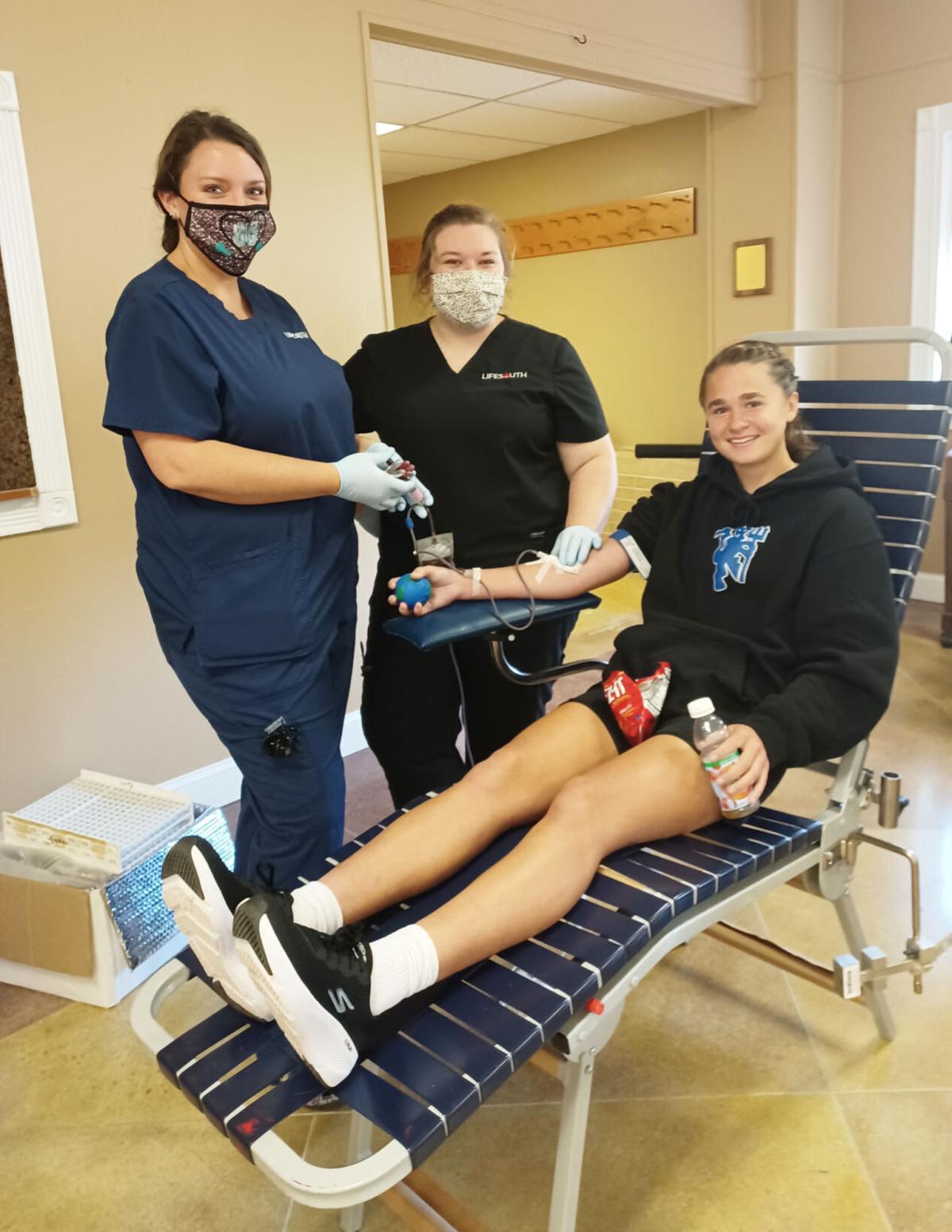 Dalton Bush, 5, and Shepherd Bush, 7, were two of more than a dozen people who took a CPR class from Carrollton firefighter Bill Lambert on Saturday at Heart Awareness Day in Buchanan.

Joel Agan had his blood pressure taken by Ambucare after running the Heart and Sole 5K and before giving blood Saturday at Heart Awareness Day in Buchanan.

After a COVID-forced hiatus last year, Heart Awareness Day returned to Tallapoosa East Baptist Church in Buchanan on Saturday for its fourth year, albeit a little leaner to allow for social distancing.

The event started with the Heart and Sole 5K. One hundred-seven runners finished the race, ranging in age from 5 to 77, said Vicki Cash who helped organize it. That’s an increase from the 81 who participated in the race in 2019.

The proceeds of the event will help purchase an automated external defibrillator to be donated to the New Plainview Baptist Church in Tallapoosa. This will be the fifth AED that has been given away through the event since it began, said Peppar Head, founder of the event.

“You never know when you’re going to have a cardiac event,” Head said. “It can be anywhere from teenager all the way up.”

Head has had personal experience with the heartache that heart disease can bring. She began the event after her husband, Byron Head, died from a heart attack in February 2015. He was only 50 years old.

That week, he had been preparing for a procedure to remove fatty tissue, but he never made it to the hospital for the surgery, she said. On Saturday night, they ate their dinner and got ready to watch the Daytona 500 race on television.

“He sat in his recliner with his feet propped up and we were ready to watch the race,” Head said. “He had a heart attack then.”

She saw his hand slip from the recliner and that was it, Head said.

Cardiac disease is a silent killer and many people, like her husband, don’t know that there is anything wrong until they have a heart attack or stroke.

Over the first three years the event has provided 137 EKGs, 40 PAD screenings, trained 125 people in CPR, and hosted 29 mammograms. Head’s excited about the lives that were potentially saved because of the Heart Awareness Day.

This year the event offered CPR classes, mammograms, a blood drive and the race. The usual EKGs, glucose/cholesterol tests and peripheral arterial disease screenings were not available due to COVID, she said. In addition, the crowds were controlled so that people could be socially distanced, Head added.

Bill Lambert, a firefighter with Carrollton Fire Department and a member of the church, taught CPR, infant choking and AED use at the event.

Although COVID has gotten the most news, heart disease is still the leading cause of death in the United States, even in 2020. According to an article on the Journal of American Medical Association website, there were 345,323 deaths attributed to COVID and 690,882 deaths due to heart disease in 2020.

CPR is one important tool that people can use to help someone having a heart attack. On the way to a heart-related call, when he hears that someone is administering CPR, he gets excited, Lambert said.

“You have such a small time frame; early CPR is crucial to survivability,” he said.

He had already taught two classes that morning, a total of 13 people including several children, and planned to teach two more classes before the event ended. He said that children are often better at CPR than adults. The American Heart Association had just highlighted an 11-year-old who saved his grandfather by performing the CPR he had just learned at a class three days before, Lambert said.

“The kids don’t factor as much emotion in,” he said. “They just do.”

Inside the Church Hall, phlebotomists from LifeSouth were collecting blood as two people registered the prospective donors at a table near the door. Kelly Porter, who was manning the registration table, joked with Allen Williams, a donor who good-naturedly balked at some of the personal questions. Williams had a whole line of people waiting in the room as well as Porter laughing at his antics.

“We have a blood drive 363 days a year,” she said. “We do not do Thanksgiving Day or Christmas Day.”

They will often set up at businesses or malls, but prefer to attend events such as this, Porter said.

“They bring in more people,” she said.