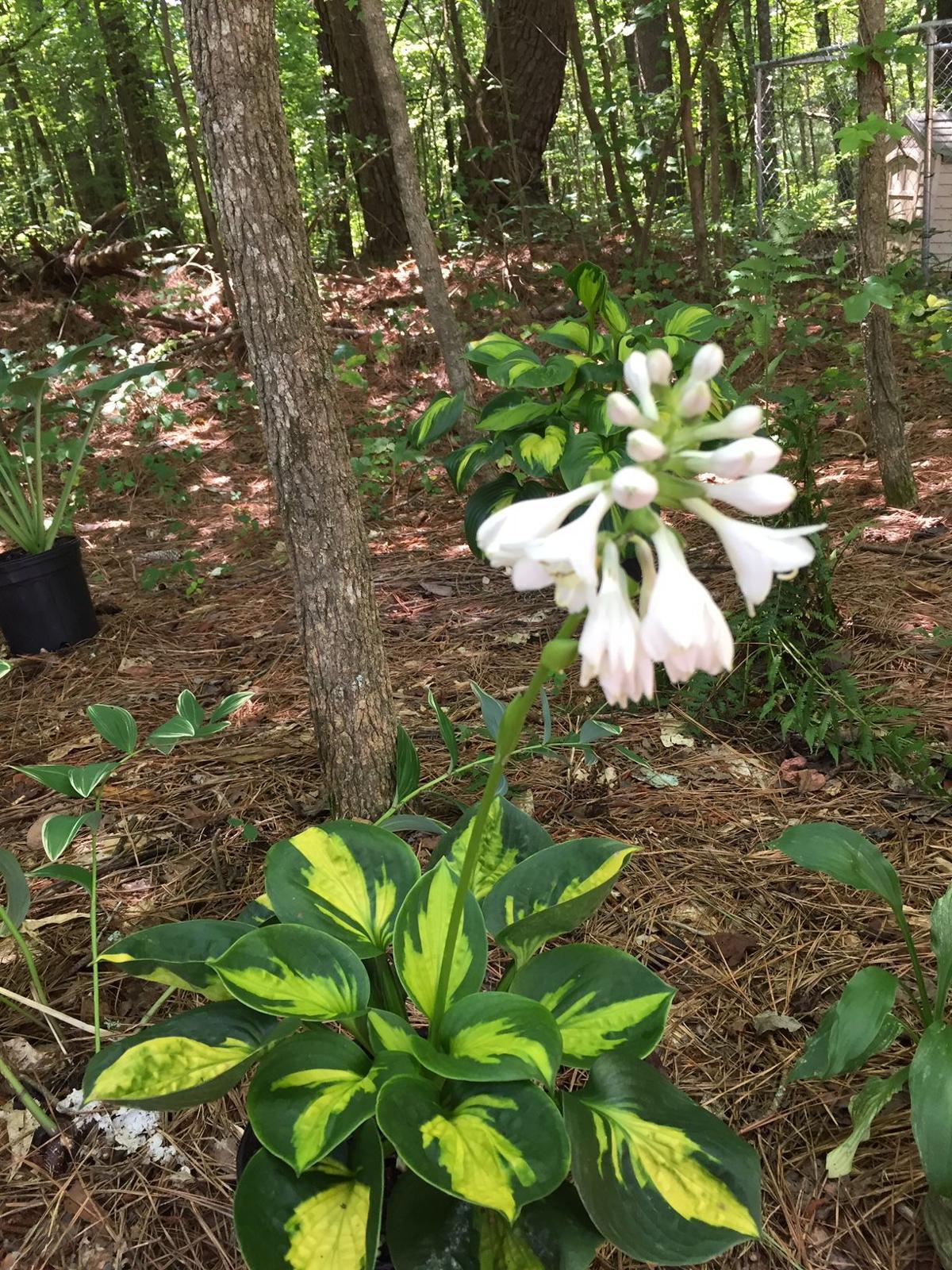 Above left: This Hosta has a beautiful white bloom. The scapes can be cut to allow roots and foliage to grow or left to dry to collect the seeds. 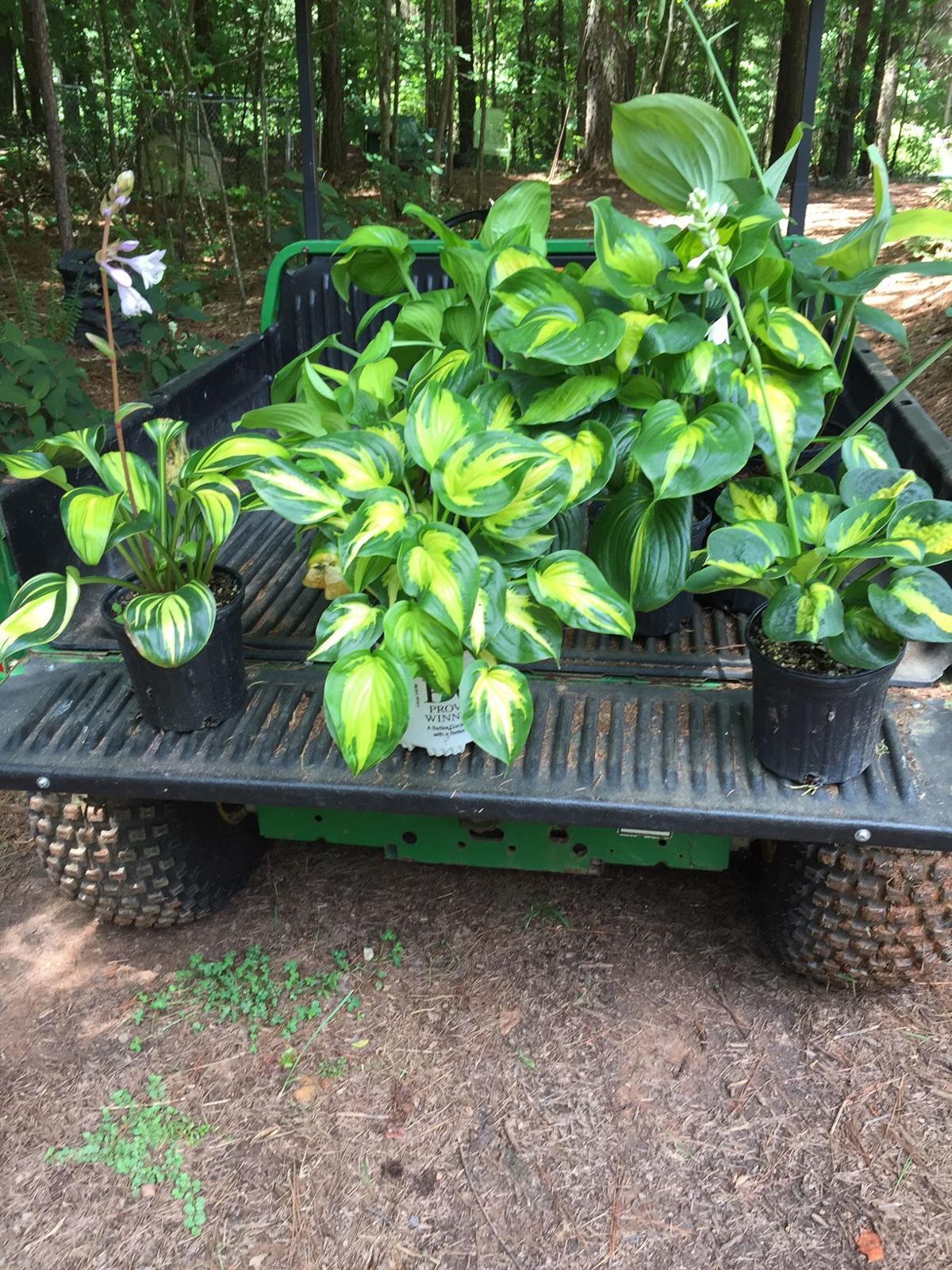 This load of variegated Hosta is ready for the garden.

Above left: This Hosta has a beautiful white bloom. The scapes can be cut to allow roots and foliage to grow or left to dry to collect the seeds.

This load of variegated Hosta is ready for the garden.

Q: I would like some information on growing Hosta. I am amazed at all of the different colors and varieties of Hosta. I do not have any at this time but would like to add some to my landscape. We live in a shady neighborhood and my neighbors on both sides have a beautiful backyard with a variety of Hosta. One neighbor’s Hosta has no blooms, while the other has flower stems galore. So, is it okay to snip off the flower stems?

A: The answer could be yes and no. Yes, if you want your Hosta to look all neat and tidy and allow the roots and foliage to grow. No, if you want to plant Hosta seeds to get a different plant. So, when you remove the flowers depends on how you want to enjoy the plants.

Hosta (Funkia) is a genus of plants commonly known as Hostas, Plantain Lilies and occasionally by the Japanese name Giboshi. Hosta is considered a perennial in Zones 1-8; we live in 7b. That means it will come back every year, and it also lives a long life. There are over 70 species of Hostas and over 3,000 registered varieties.

Hostas are considered to be shade-tolerant foliage plants, but they do bloom for about three weeks, usually between May and September, according to the variety. Bumblebees and other pollinators love to visit the small, trumpet-shaped blooms of white, lavender and violet. Hostas add interesting texture and color to the garden in spring, summer and fall.

When, and if, you remove the flowers depends on your preference for blooms or no blooms. The American Hosta Society recommends cutting off each scape after three-fourths of the flowers have bloomed. This keeps the plants from diverting energy into setting seeds for the next year, instead they’ll grow more roots and leaves. If the plant is allowed to grow more roots and foliage, thus you can divide the Hosta more quickly and have “identical plants” to add to the landscape.

Another way to add to your Hosta habit according to the Georgia Gardener, Walter Reeves, is to leave the flowers alone and you can collect Hosta seed from the crumbly brown pods. They may be planted immediately in a sunny well drained spot. Reeves says they will sprout in the spring, but don’t be surprised when the seedlings are not identical to the parent plant.

If you choose to go bloom-free, use a pair of sharp garden scissors or hand pruners to snip the scapes or stems at the foliage level. The scapes are woody and can remain on the plant throughout the winter. Always resist the urge to pull the scapes off with your hand because it can damage the plant.

If you opt to leave the blooms on the plants, the stems can still be removed once the flowers fade.

Hosta blossoms can be enjoyed inside as well, although they may be short lived as each individual Hosta bloom lasts about a day. Hosta blooms may be enjoyed in a bouquet or as a single scape in a bud vase in the kitchen window.

Most Hosta blossoms are unscented, however, there are several varieties that have scented flowers.

Its large, white flowers compare to a gardenia-like fragrance up close and work well on a pathway or next to a patio or deck.

Hostas require minimal maintenance, although some light pruning keeps the plant productive, while improving the Hosta’s health and encouraging lush foliage. Cut off any yellow, dead or damaged leaves with shears. Hosta foliage may be cut back and covered with mulch in the fall, or left alone for nature to take its course.

If you have questions about Hostas, contact the Hosta experts at the Georgia Hosta Society at georgiaHosta.org. If you have any other horticultural questions, contact a Master Gardener Extension volunteer at the UGA Cooperative Extension Carroll County Office at 900 Newnan Road in Carrollton, at 770-836-8546 or via email at ccmg@uga.edu.