A high-tech suite of offices for court personnel could soon be located on the now vacant fifth floor of the Carroll County Courthouse.

Plans for the fifth floor come from Chief Superior Court Judge John Simpson, whose proposal asks for a court facility that is adaptable and filled with useful technology, and will consolidate judicial-related institutions in one space.

“This will be good to break down the barriers that separate agencies,” said Simpson said in his proposal letter to the commission. “This will improve the flow of information about cases, and will also promote negotiation and case resolution.”

Although Simpson is behind the plans, he said that the Board of Commissioners will be responsible for putting those plans into action.

“I am pleased that the Carroll County Board of Commissioners have allowed myself and fellow judges to share legitimate concerns and solutions to provide a safer and healthier environment for our citizens who rely on court services,” said Simpson.

“I am thankful for everyone working together so that we will continue to provide efficiency for the future of our courts in Carroll County.”

The total estimated cost of the project will be $350,000, which county officials say will come from the county’s share of American Rescue Plan Act (ARPA) funding.

According to Simpson, the COVID-19 crisis caused all judges to close jury and civil trials in Georgia for approximately 14 months. However, the Carroll County Superior Courts never closed during the pandemic, he said.

During that time, Simpson said the courts developed safety protocols and used online platforms to do motions, guilty pleas, and civil hearings.

“We gained insights into how we can better serve our citizens,” said Simpson. “Technology is the key to keeping people safe in a COVID type emergency.”

On August 16, Simpson held the first-ever pre-trial jury selection using the Zoom teleconferencing platform in a criminal case. This meant that jurors were questioned about their qualifications and opinions while remaining at their home or place of work.

In his proposal to county commissioners, Simpson said that court officials have learned that potential jurors hate sitting in the jury assembly room as a judge hears guilty pleas and motions.

Additionally, Simpson said that the technology in the courtroom is not adequate nor is it integrated. For that reason, he said he would like to include more up-to-date technology.

“We can use online technology to connect with state prisons across Georgia when inmates have motions or need to appear to hearings,” said Simpson. “Out-of-state witnesses can testify without traveling to our courthouse.

“It could be a big help to people to try and do some level of questioning to jurors over the online platform who are serving on the jury. They could either stay home or do it from their office, and then come to the courthouse at a later time.”

In addition to implementing more advanced technology, Simpson said that he would like a larger courtroom area to accommodate case participants, witnesses, counsel, judge, and jury, and materials that could be used to easily reconfigure the courtroom.

“Sometime a trial may call for doing demonstrations, and the area in front of the jury could be adjusted for each of the cases we are working on,” said Simpson.

Simpson said the fifth floor could not only be used for holding court cases but it could be used for a lot of other things.

“It could be used for something such as a commissioner meeting about some big issue in the county,” said Simpson. 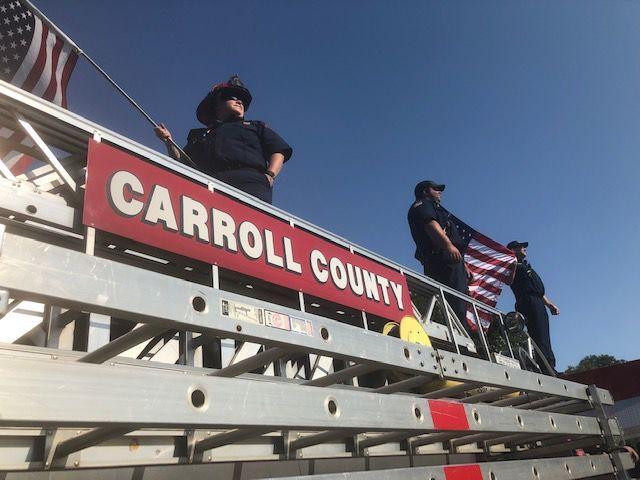 Firefighters from Carroll County Ladder 6 took time on Saturday to honor the memory of the nearly 3,000 victims, including 643 firefighters, of the terrorist attack on the World Trade Center Twin Towers 20 years ago. Displaying American flags over a bridge spanning I-20 were (left to right) Lt. Nicole Brigham, Lt. Mike Willingham, and Firefighter C.J. Frisby. They were greeted by honks from westbound motorists. The Carroll County Fire and Rescue Department has been responsible for displaying the flags in observance of 9/11 every year since 2001.

Dorothy Pittman, owner of Horton’s Books and Gifts in Carrollton, will go on trial Sep. 28 for violation of the local leash law and a nuisance ordinance. Here, Poe “signs” a petition started by friends of the mascot cats.

Pittman was cited for two counts of failure to restrain and one nuisance violation after one of the cats allegedly attacked a dog on a leash on outside the Adamson Square bookstore on June 7, supposedly scratched the arm of its owner, a resident of Madison, Georgia, in town visiting relatives.

According to Mrs. Pittman’s attorney, Kevin Buice of Carrollton, the complainant did not appear during earlier court proceedings, but is expected to be present for the misdemeanor hearing later this month.

“All three charges, failure to restrain twice and nuisance, are misdemeanors,” Buice explained.

“I am informed that the more traditional dispositions following a finding of guilt are a $125 or so for a leash violation, or $425 or so for a nuisance,” Buice noted.

The longtime Carrollton attorney added that although the complainant was not required to appear earlier, he/she is mandated to appear at the formal hearing now that it has been turned over for formal adjudication.

If the complainant does not appear for the Sept. 28 proceeding, the charges would have to be dropped for lack of evidence, Buice said.

Meanwhile, the allegedly felonious felines have been gathering local support.

Two petitions, entitled “I Stand with Poe and Dante,” one at Horton’s bookstore and the other on-line with the Carroll County Humane Society (carrollcountyhumane.org), have garnered the signatures of well over 1,000 citizens.

According to portions of the petition, Poe’s and Dante’s neighbors and friends are at a loss to understand what could have actually happened during the incident. These cats are said to be very well socialized and there has never been single complaint about their behavior.

Additionally noted in the petition: “They have been wandering around The Square and interacting with dogs, cats, and humans of all shapes and sizes their whole lives.”

The two felines often take part in adoption events held in front of the bookstore, when they mingle with dogs being presented for adoption, as well as being annual participants in the MayFest celebrations each year that bring hundreds of visitors and their pets to The Square.

The petition concludes with the statement: “Therefore, fans of Dante and Poe want to register their support for these beloved ambassadors for downtown Carrollton and do whatever we can to make sure they are able to return to their peaceful lives on the Square.”

According to both Pittman and Buice, it is hoped that someone who witnessed what transpired, will come forward.

A 57-year-old man received a 30-year sentenced Thursday after pleading guilty to charges stemming from the armed robbery of a Carrollton gas station in 2019.

Jeffrey Fitzgerald Clemons had been charged with two counts of armed robbery, two counts of possessing a firearm during a felony, and possession of a firearm by a convicted felon in connection with the Sept. 3, 2019 robbery of the Raceway gas station on Old Airport Road.

According to a release issued Tuesday by the Coweta Judicial Circuit District Attorney’s office, Clemons entered pleas of guilty to the charges during the opening of court proceedings Sept. 9 before Carroll County Superior Court Judge Bill Hamrick.

Hamrick sentenced Clemons to 30 years, with the first 15 years to be served in prison in accord with a negotiated plea agreement. The release noted that because of the armed robbery charge, Clemons will not be eligible for parole until he has served the first 10 years of his sentence.

The release states that on the day of the robbery, Carroll County sheriff’s deputies responded to a robbery call at the gas station. There, two women clerks told them that an older man had come into the station, produced a handgun, and demanded cash from the registers. The man then ordered the women to another area in the store, then fled the scene.

Three days after the robbery, on Sept. 6, lawmen stopped the vehicle as it was being driven by the same person. Officers located two black face masks and a handgun which, according to the release, matched a description given by the store clerks.

Clemons admitted his involvement in the robbery, the release states, but the driver — whose name was not given in the press statement — was killed in an unrelated incident in June 2021.

Superior Court cases have been on hold for several months as court activities were suspended due to the coronavirus pandemic.

The release also included a statement by District Attorney Herb Cranford, who praised the sheriff’s office for their effort to hold the robbers accountable.

“The victims in this case were traumatized with the threat of being shot while they were simply trying to make a living,” Cranford said. “In contrast, these defendants chose to victimize the innocent rather than get a job.

“For choosing violence and crime over being a hardworking responsible citizen, it is appropriate that defendant Clemons be removed from our community for the next 15 years.”

McClure was transported to the Carroll County Jail.