Four deaths due to COVID-19 have been reported in Carroll County in the past two days, including three on Friday.

Georgia Department of Public Health reports show that as of 3 p.m. on Friday, there have been 46 total deaths among Carroll County residents. This includes three new deaths on July 31 and one death recorded on July 30.

DPH has reported that there are 1,687 COVID-19 cases in the county, with 421 of those cases occurring in the last two weeks.

According to the Centers for Disease Control and Prevention, there have been 178,323 confirmed cases in Georgia and reported to the CDC, making Georgia seventh among all other states in terms of COVID-19 confirmed cases.

With 3,488 deaths reported to the CDC, Georgia is 13th out of the 50 states plus the District of Columbia, New York City, and eight other U.S.-affiliated jurisdictions.

In Carroll County, hospitalizations for COVID-19 within the Tanner Health System remain high. The system released a weekly report on the virus on Friday, which has information as recent as July 30.

There were then 57 COVID-19 confirmed admissions to the health system’s 366 total licensed beds, which accounts for 15.3% of all total inpatient beds system-wide.

The health system has performed 14,118 total tests, with 2,013 of those tests being positive and 238 tests awaiting results. This results in a 14.51% positive rate, which is an increase over last week’s rate.

Last week’s report was updated on July 23, when the health system was reporting 1,633 cases, meaning that in the past week, there have been a total of 380 cases over that seven-day period.

The numbers reported by Tanner reflect cases that have been tested or treated within the health system, regardless of the county of patient origin. It does not include any tests performed by the local health department, government agencies, or non-Tanner affiliated clinics. 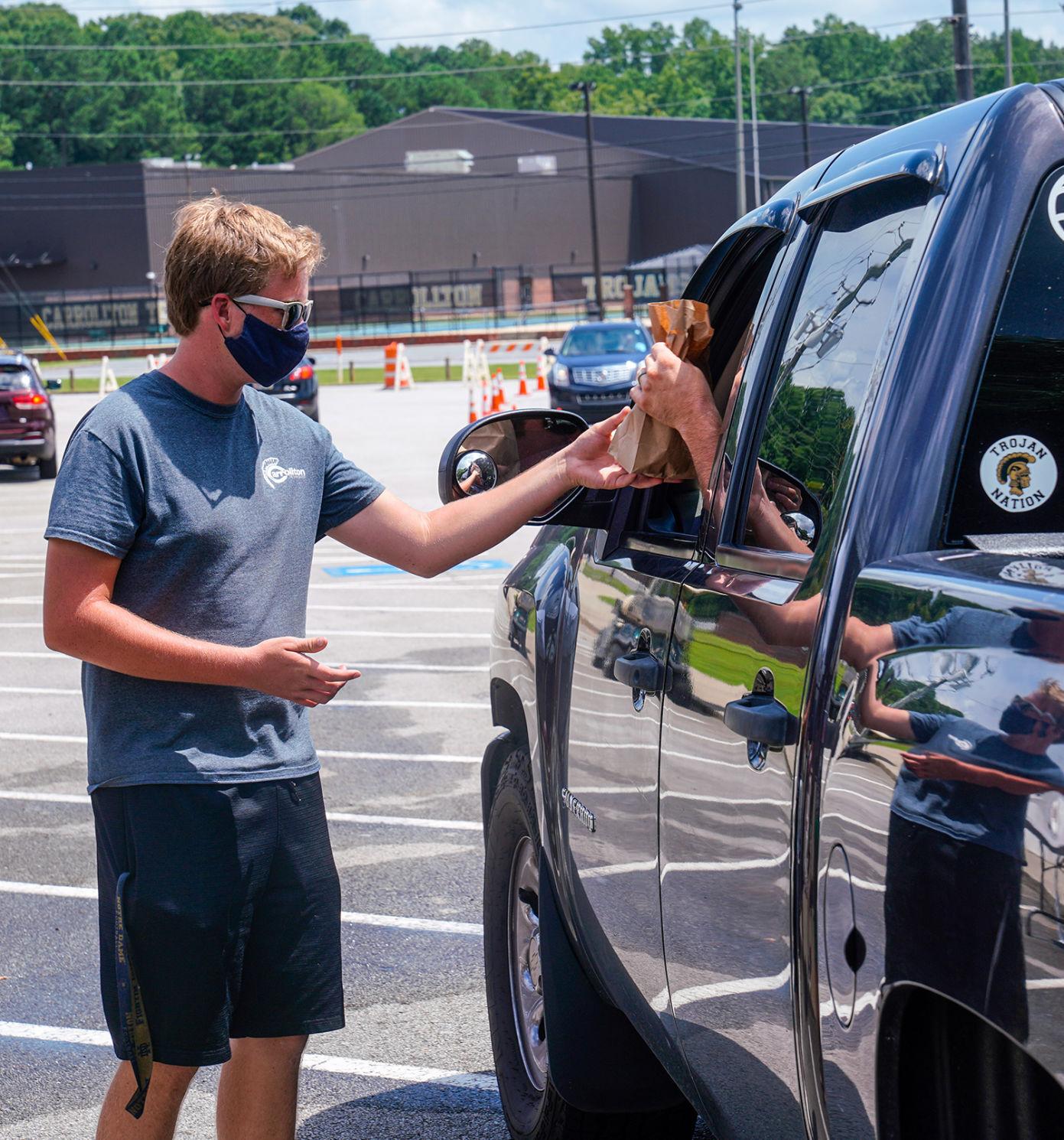 Carrollton High School senior Andrew O’Hara hands a meal to a driver during the Trojan Band Booster’s annual barbecue on Friday. The band bought enough food for 2,000 people and had about 1,300 preorders for the event. Due to the COVID-19 pandemic, service was drive-up this year with special precautions in place. All profits from the event will go to the CHS Trojan Band. The food was supplied by Billy Bobs BBQ and other items were supplied by Tanner Grocery. 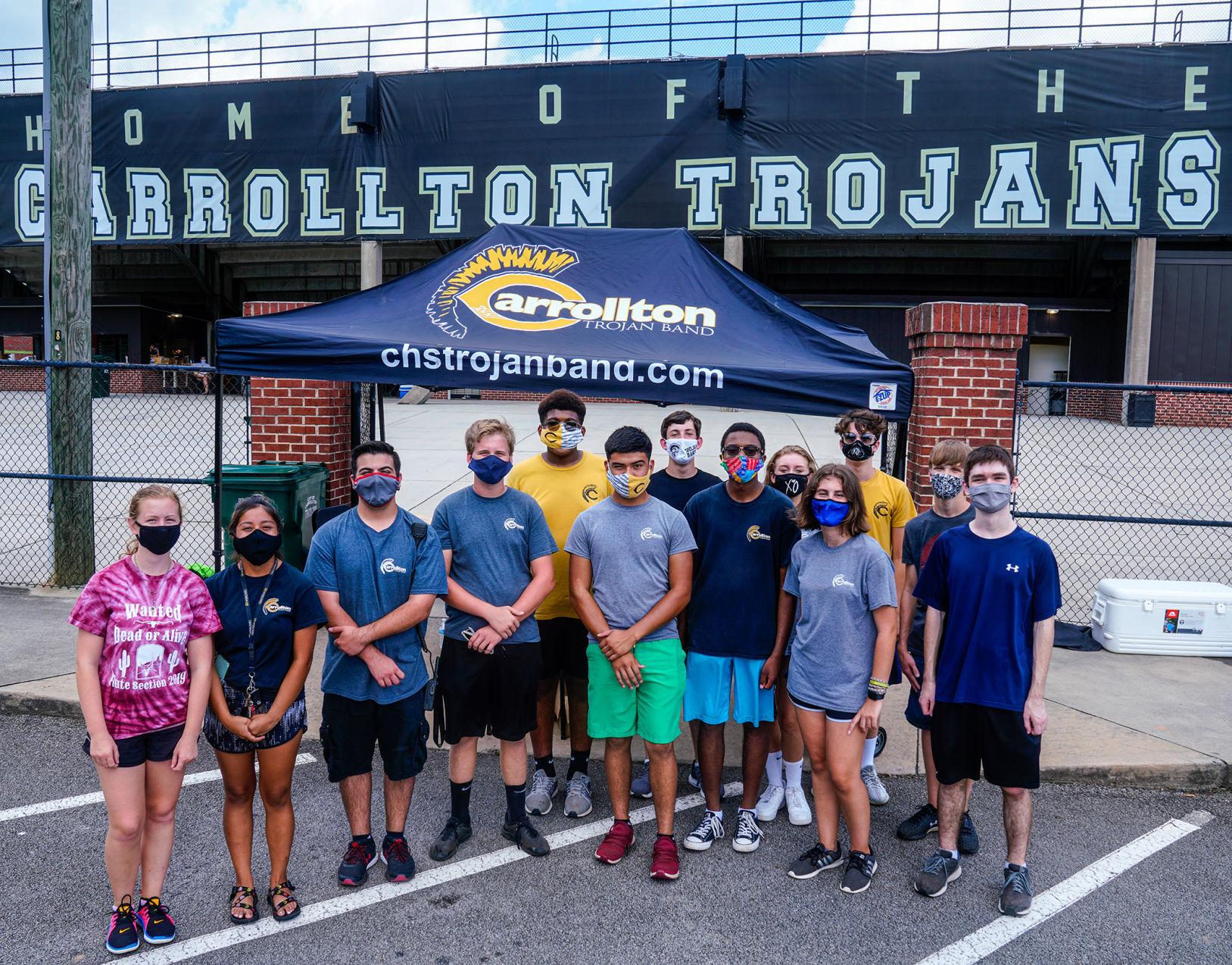 Times_georgian
Phillips becomes a Bulldog
By Jay Luzardo The Times-Georgian

Carrollton High School senior pole vaulter Payton Phillips verbally committed to the University of Georgia earlier this week. Phillips is the nation’s No. 33 overall 2021 female track recruit, which is equivalent to a five-star football recruit.

The two-time state champion announced her decision through Twitter on Monday.

Phillips’ tweet said “Grateful to announce I have verbally made the decision to continue my athletic and academic career at the University of Georgia. I want to thank my parents and coaches who have helped me get to where I am today.”

“It means a lot, and not just to me, but to the Carrollton High School female track and field program.” she said. “I am extremely proud of the accomplishments she’s made going toward the next level.”

Phillips’ pole vaulting coach and father, Carey Phillips, said that this decision is like a dream come true for her.

According to Carey, after her sophomore year, she was invited to the New Balance Nationals Indoor competition in New York City, where she finished second in the emerging elite pole vault. On the return home, they visited multiple universities, such as Clemson, North Carolina and Wake Forest, but none of them caught her attention.

However, the minute Phillips stepped on campus at the University of Georgia, she was intrigued and wanted to learn more about the track facilities and school.

“We left there and she was like ‘Daddy, that was awesome. That’s where I want to be.’ Ever since then, she’s been 100% committed to that,” Carey said. “For that offer to come through, I think she’s beyond words right now. She feels like she’s living in a dream right now.”

Phillips pole vaulting career began in the eighth-grade, when she jumped an 11-7 and became the nation’s No. 1 eighth-grade pole vaulter.

At the end of her freshman year, Phillips became a state champion, placed second in the USA Track and Field’s pole vaulting competition, and was named a Junior Olympic Track & Field All-American.

The following year, Phillips became a state champion, where she broke the state record with a 13-2 1/2 jump, and was named a Junior Olympic Track & Field All-American once again. She also won the national championship and set a nationals records of 13-5 1/4.

During a meet her sophomore year, Phillips achieved her highest jump of 13-7, which was the fourth highest jump in the nation at the time. Also, she was awarded the Red Smith Award for Outstanding Female Field Athlete at the 55th Annual Powerade All-Metro Track & Field Banquet, which is uncommon for a sophomore.

During Phillips’ junior year, she was once again invited to New Balance Nationals Indoor competition. However, she never competed due to the coronavirus pandemic.

Entering her senior year, Phillips’ is the nation’s No. 33 overall 2021 female track recruit, which is equivalent to a five-star football recruit, according to MileSplit.

Ash Colwell will be a contestant on “Wheel of Fortune” when it airs Monday.

A Carrollton graduate and former resident will be a contestant on Wheel of Fortune when it airs Monday, August 3.

Ash Colwell will be a contestant on the popular game show. He is from Carrollton and recently attended the University of West Georgia before moving to Charlotte, North Carolina.

The former UWG student is an alternative rock and cartoon junkie and enjoys thrift shopping, selling things online, and writing fanfiction. And, of course, he is a fan of the game show.

Colwell is appearing during “UK Getaway” week on Wheel of Fortune, presented in partnership with Collette. He will be spinning the Wheel, calling out consonants, and buying vowels to solve hangman-style puzzles in an attempt to win once-in-a-lifetime Collette vacations, new cars, and cash prizes.

Colwell has been a fan of the show “all his life” and has been a loyal viewer of the show, having watched hosts Pat Sajak and Vanna White with his family for years.

The episode Colwell appears on will be featured during a monthlong contest in which the show will give away $1,000 to a viewer and donate an additional $1,000 to a food bank in that person’s hometown. The contest will run each weeknight from July 13 until August 14.

Colwell’s episode on the syndicated show will air at 7 p.m. on WXIA, 11 Alive.

Two restaurant chains have been burglarized in Carroll County in separate incidents, according to authorities.

One of the crimes resulted in the arrest of a former female employee from Dallas, Georgia, while the other burglar remains unidentified.

In the first case, 27-year-old Laura Fuller was arrested on Thursday in connection with the burglary of a Subway store inside the Villa Rica Walmart that took place on June 16.

Villa Rica police were called to the scene by a manager, who reported that $400 that had been locked away in a freezer was missing, according to a police department report.

Security camera footage showed what police said was a woman wearing a white hooded sweater entering the Subway at 7 a.m. The woman walked along the side of the store, remaining in the shadows, and entered the office area, officers said.

Inside the office, the individual was seen on video searching for a key to enter the freezer, where the money is normally kept overnight. The woman opened the freezer, took something, and placed it in her pocket, according to the report.

Officers said it took the bandit two minutes to complete the burglary.

Walmart surveillance cameras recorded the individual leaving the store toward the deli, where she grabbed a soft drink, paid for it at self check-out, and left the building, according to the report.

The report stated the manager arrived at 8 a.m. to open and realized the money had been stolen. Through the investigation and help from the public on Facebook, police identified the suspect by matching the vehicle she drove away, according Villa Rica Police Captain Keith Shaddix.

“It’s really amazing that we solve a lot of crimes through Facebook with the community’s help,” he said. “It makes you proud to live in a neighborhood that still supports the police.”

Fuller was released from the Carroll County Jail after posting a $6,500 bond.

In the second restaurant burglary, an unidentified man took a safe from the Waffle House on Maple Street in Carrollton last week.

On Wednesday morning, July 22, a Waffle House manager contacted Carrollton Police regarding a burglary that occurred between the hours of 9 p.m. on Tuesday to 6:30 a.m. The store was closed during those hours.

Upon investigation, officers determined the bandit forced open the back door with a prying tool and made his way to the office. There, he stole a small safe containing about $1,000 and a part of the surveillance system, according to ACE Unit Investigator Chad Taylor.

Police said the burglar may not have been aware of an exterior camera that may have caught him on video. Waffle House’s corporate offices retain footage of each location’s surveillance system. Investigators are awaiting copies of the footage to further the investigation, according to Taylor.

The report stated, officers also collected coins and other items found at the scene for fingerprint analysis and evidence.

As of Friday, the suspect has not been identified. The individual will face charges of burglary to the second degree upon arrest.