Georgia’s jobless rate nearly tripled to 11.9% in April compared to March, claiming the all-time record for unemployment in the state since the Great Recession.

And more than 14,000 Carroll County residents filed for unemployment that month, which is four times the amount of claims from county residents in March, according to a University of West Georgia economist.

The state's unemployment rate was 4.3% in March during the early weeks of the pandemic. In February, the jobless rate was at a historic low of 3.1%.

The previous record high unemployment rate was 10.6% in December 2010 following the Great Recession of 2007-2009, Labor Commissioner Mark Butler said in a release issued on Thursday.

“The cause of this unemployment rate differs greatly from that of the previous record, and I have no doubt that we will recover just as quickly and get back to our record lows once again,” Butler wrote.

The unemployment rate in Carroll County for April and the amount of unemployment benefits paid to workers in the county were unclear as of press time on Thursday. Those numbers will be released next week by the state Department of Labor after they are received by the federal government.

Smith wrote in an email that 14,450 Carroll County residents applied for unemployment insurance in April. That number is nearly four times more than the 3,655 claims filed in March. In April 2019, only 178 claims were filed with the labor department.

"This initial UI (Unemployment Insurance) claims data is considered by most economists to be a leading indicator of economic health," Smith wrote. "The April number for Carroll County paints a pretty stark picture of the problem facing our county's workforce."

He added that this initial claims number suggests that, at one point or another during April, more than a quarter of the county's workforce was out of work for some period of time.

"To be clear, this UI statistic is not the Carroll County unemployment rate, but it tells us about the number of new significant interruptions that have occurred, and there were a lot in Carroll County in both March and April," Smith wrote.

"It suggests Carroll residents shouldn't expect a rapid return to business as usual or for the unemployment rate to immediately return pre-shutdown levels as the economy reopens."

He wrote that, even if every aspect of the pandemic and the subsequent stay-at-home order were to be "handled and timed perfectly," he expects it will take a few months for the economy to return to normal.

As the number of unemployment claims has climbed, the number of employed residents has dipped since the virus began. The state’s labor force and number of available jobs are also shrinking.

The number of workers in Georgia decreased by 624,126 to 4.2 million during April, the lowest number of employees in eight years, according to the state’s labor department.

Georgia’s labor force was down by 281,525 to reach a total of 4.8 million, the lowest the workforce has been in more than four years.

Initial claims have rocketed in the food service, retail trade and health care industries, according to the labor department. Restaurant, bar, hotel and other hospitality workers have been the largest group of layoffs across the state.

Earlier this month, the department announced the creation of the Claims Conversion Program for employers who have permanently laid off workers. This program would allow employer filed partial unemployment insurance claims to be converted to individual claims if an employee gets permanently laid off without a lapse in benefits.

The Claims Conversion Program will transfer those claims instantly and outline the steps employees need to take when presented with a variety of challenges, ranging from working reduced hours to permanent layoffs.

In the past, when an employee gets permanently laid off, the worker would have to file an individual claim. With more than 855,000 valid claims processed, that process can now take more than 30 days, according to the state.

Butler said his staff are also seeing a combination of a high volume of unemployment claims coming in as well as claims that have been improperly filed.

“It’s not so much the actual number of people trying to get unemployment,” Butler said. “It does not matter whether you have filed one time or four times, we still have to process every single claim. We don’t know if there’s been a double claim until we start processing.”

He said he has also been asked about employees not receiving benefits when their co-workers have received assistance. In some cases, the worker may not have enough wages and work history to establish a claim when the employer files on their behalf.

The employee can either reset their claim to a future date to establish enough wages or apply for Pandemic Unemployment Assistance (PUA) benefits, Butler added.

That funding is part of the federal Coronavirus Aid, Relief and Economic Security (CARES) Act that was signed into law on March 27. The pandemic assistance applies to workers who have been affected by the coronavirus shutdown and have no prior employment history. 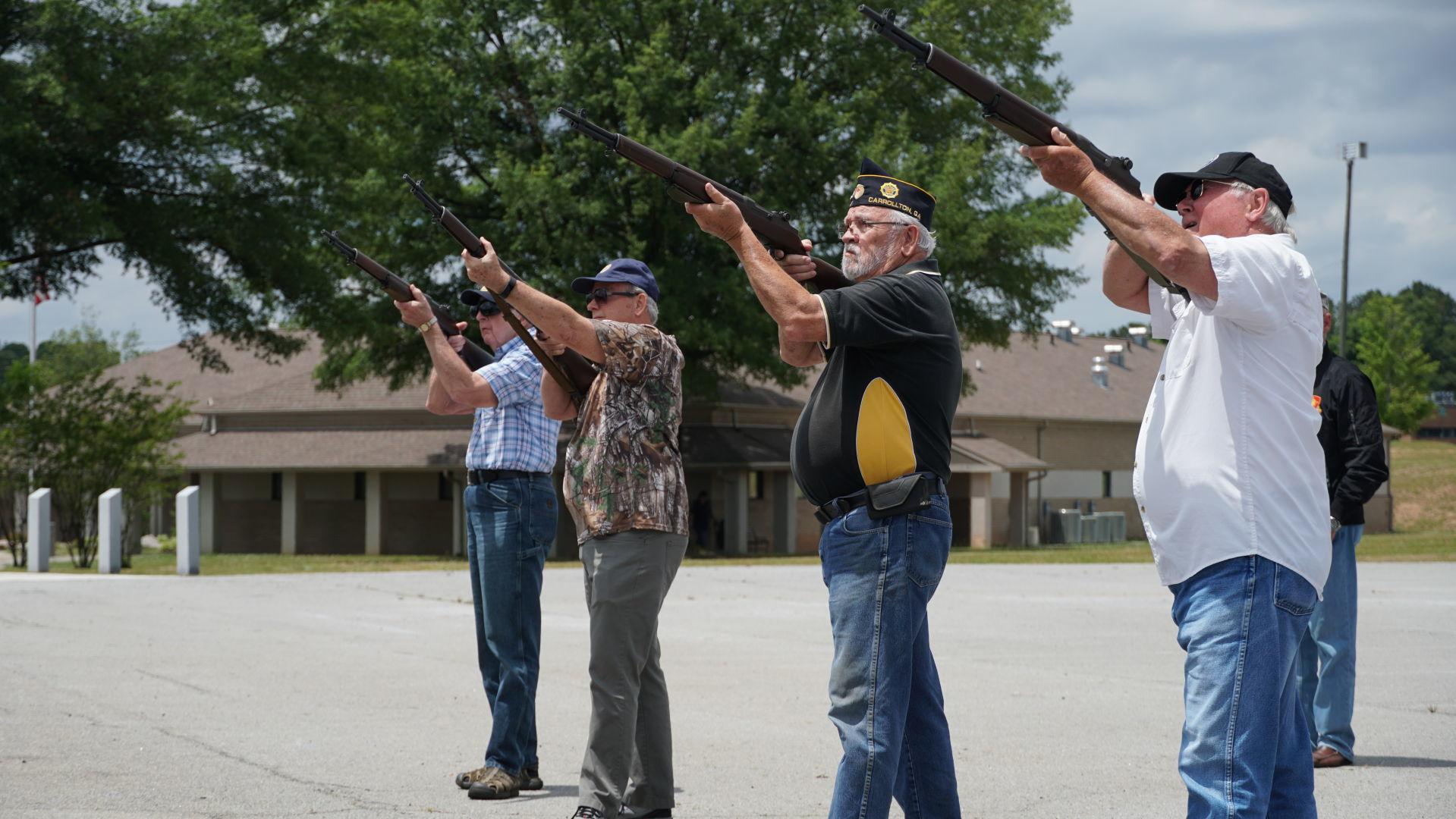 Photos by Jack Doyle for the Times-Georgian

Members of American Legion Post 143 rehearse a rifle salute on Thursday in advance of a Memorial Day ceremony that will be held 11 a.m. Saturday at the Carroll County Veterans Memorial Park. The theme of the ceremony will be the 75th anniversary of the end of the European conflict of World War II, or VE Day. UWG history professor Dr. Steve Goodson will be the featured speaker. Terry Lowry and The Carroll County Wind Ensemble will provide music prior to and during the program. Proper social distancing will be in effect for the ceremony. There will be no bleacher seating; the parking lot will be used for spectators and they must provide their own seating or remain standing for the program, which is expected to end around noon. 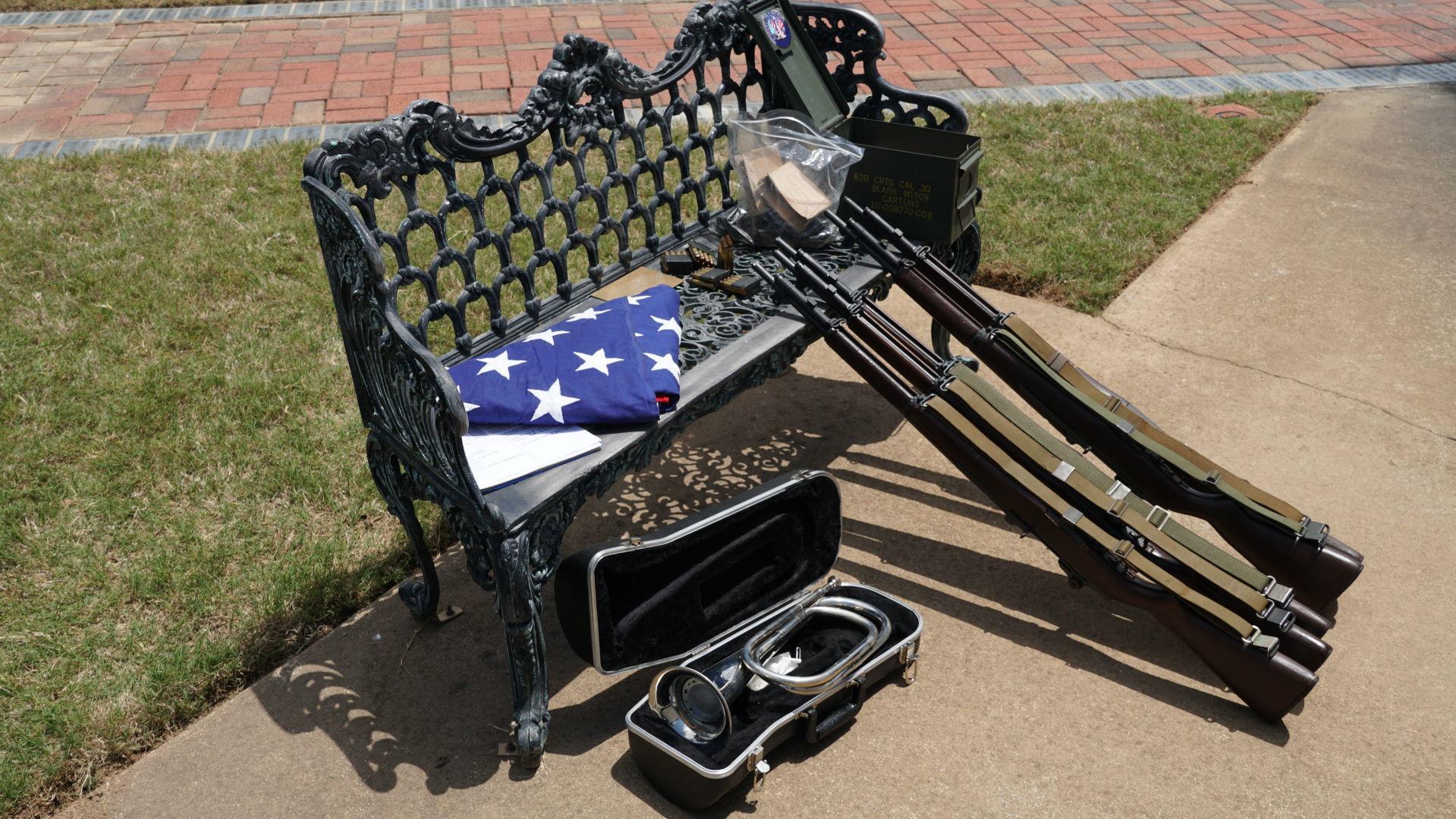 Jack Doyle for the Times-Georgian

Equipment and a U.S. flag are made ready for the ceremonies Saturday at Carroll County Veterans Memorial Park, 1050 Newnan Road.

Carroll Chamber officials are planning the next phase in the economic recovery from the coronavirus pandemic, surveying business owners about how they have been impacted.

The Blue-Ribbon Task Force was created in April and is led by Chamber officials to help the county’s business community “accelerate the recovery, identify challenges, offer solutions and provide resources.”

That is according to an information packet distributed to task force steering committee by Daniel Jackson, president and CEO of the Carroll County Chamber of Commerce.

Jackson said Chamber business members have been divided into 23 business sectors, ranging from automotive sales and agribusiness to retail and utility companies, and each sector will discuss the actions they need to take to successfully recover from the economic shutdown.

“Each sector will communicate in a variety of ways including emails, conference calls and video conferencing,” the packet reads. “The intent of the communication is to understand the challenges and opportunities specific to each sector.”

Rhyne Owenby, director of member engagement for the Chamber, said she and the other economic leaders at the Chamber were thinking of recovery within 10 days after the coronavirus began.

Carroll County business owners who have decided to reopen their doors have been emailed a 10-question survey about how the coronavirus has impacted their livelihoods, Owenby said.

This questionnaire will be distributed to Chamber members and asks business owners whether any of their employees have been furloughed, if the business has adapted to COVID-19, and what resources would be most helpful for the recovery process.

The survey will go out this week, Owenby said, and the deadline for business owners to fill out the questionnaire is May 28. During the week of May 29-June 5, Chamber officials will go through each response to find trends before presenting to the Chamber’s executive committee the week of June 6.

The information packet highlights social distancing protocols, sanitation guidelines and the best practices for keeping employees and workers safe. Businesses that have resumed operations will also be given a blue bow to put on their front doors or signs letting the public know they are open.

A list of trends for the “new normal” once the pandemic ends is also within the brochure, ranging from increased teleworking to the health precautions that are necessary while attending large gatherings. Other guidelines, such as rehiring and retraining employees and implementing health precautions, are also listed in the booklet.

Memorial Day could see some rain as forecasters are expecting thunderstorms to roll through the county in the morning.

The National Weather Service in Peachtree City is the forecast office for Carrollton and NSW has a detailed forecast for what officials expect this holiday weekend.

While the forecast is subject to change, forecasters expect a “weather system,” or generic thunderstorms, to come through in the morning of Memorial Day based on models at the NWS.

The information for the forecast was last updated at 4 p.m. on Thursday and could change as forecasters learn more.

The League of Women Voters held a candidate’s forum on Tuesday for the three Carroll County State Court Judge candidates.

Met Lane, Nathaniel Smith, and Erica Tisinger are all running for the State Court Judge position and will appear on the ballot on June 9.

The forum was held virtually and was hosted by the league and moderated by Robin Collins. Candidates addressed issues such as incarceration, court trials, the war on drugs, and more.

When it comes to the high rates of minority incarcerations, Lane attributed this to the breakdown of the family. Smith said that it could be due to a policing issue, specifically over-policing. Tisinger said that while it might be an unpopular opinion, the incarceration is due to prejudice.

Tisinger’s idea for the future of the judicial system is that people continue to have faith and trust that when their case is heard, they are being treated fairly and with respect. She said that changes she would make on the State Court would include being accessible and create relationships with the prosecutors and attorneys.

Lane said that he would help move cases along due to the heavy caseload and would work more to make that happen. He would also look for ways to bring costs down, including sharing jurors with Superior Court or asking county commissioners for funding.

The full forum can be found on the YouTube page for the League of Women Voters Carrollton — Carroll County.

Early voting in Carroll County has already begun and June 9 is the election day for the State Court Judge.