In mid-April, Carroll County witnessed one of the most horrific high-speed chases to date that resulted in three law enforcement officers shot and wounded, one suspect dead, and one in custody.

Pier Shelton, 28 of Alabama, was killed by police after the chase ended near Ithica Elementary School, located off Highway 61 near Villa Rica.

As deputies do so, a man armed with a rifle, later identified as Pier, suddenly appears — emerging in front of the parked patrol car’s bright, flashing blue lights.

The video clearly shows Pier as he levels a high-powered weapon GBI agents have identified as an AK-47, and opens fire at the deputies’ car.

The first shot crippled the vehicle, shutting off its electrical system. And as Pier advanced on the car, another burst of fire pierced the windscreen directly in front of where the deputies were sitting.

Both Gordy and Repetto were released from hospitals shortly after the incident, but Holloway had remained in Atlanta where he had undergone therapy with specialists, who reported that Holloway did “amazingly well” in his recovery.

On July 14, Sgt. Rob Holloway was returned home to a hero’s welcome on the streets of Carrollton, escorted by a large number of first responders.

Dozen of patrol cars from law enforcement agencies across west Georgia participated in the escort, which began in downtown Atlanta, traveled Interstate 20, and through Adamson Square.

The escort made a slow procession through Adamson Square, which was closed to traffic so that hundreds of civilians and law enforcement agencies could line the streets and wish Holloway a safe return.

Many waved Thin Blue Line flags, and two fire department trucks extended their ladders so that two of the flags could hang from a cable.

Law enforcement agencies from Carroll County, Carrollton, and Villa Rica presented Purple Hearts and medals of valor to lawmen involved in the April 12 shootout with a gunman.

Repetto also received the Purple Heart medal due to being wounded in the incident.

Holloway and Cpl. Wesley Cheatwood were awarded the medal of valor for showing exceptional courage, regardless of personal safety, in an attempt to save or protect human life.

Holloway was also presented the Purple Heart for being wounded during his acts of exceptional courage.

Also honored were several Villa Rica officers, including Chase Gordy, who was shot twice in the incident.

Each of these officers received a medal of valor except for Walton, who Mansour said, was solely recognized for his acts of providing first aid to those who were hit during the attack.

In addition to the medal of valor, Gordy received a Purple Heart. 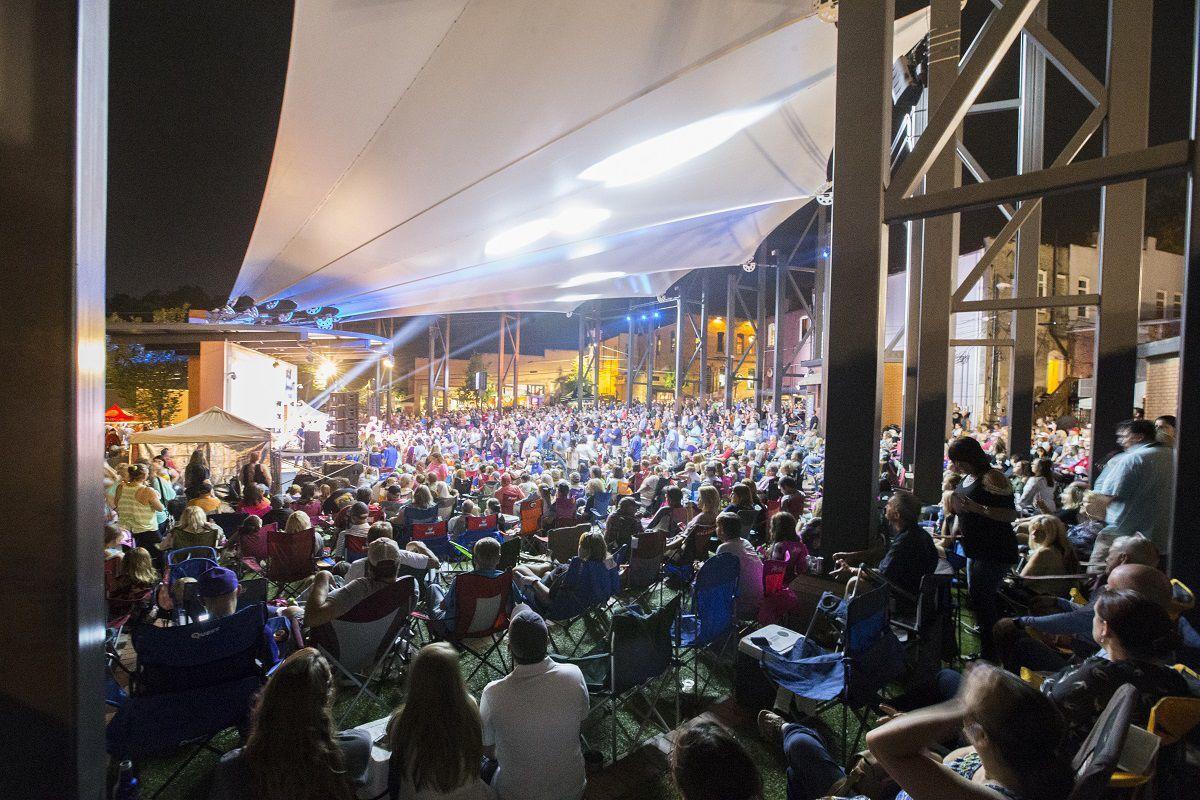 The Carrollton Amp hosted was the site of many events in downtown Carrollton during 2021. Pictured above is the capacity crowd that attended the Lonestar Lights show.

One of the top local news stories of 2021 was the naming of former Georgia Secretary of State. Sixth District Congresswoman and gubernatorial candidate Karen Handel as the new president and CEO of Carroll Tomorrow and the Carroll County Chamber of Commerce.

The announcement on July 7 that Handel would be the new leader of Carroll Tomorrow and the Chamber was made by Loy Howard, chairman of the Carroll Tomorrow Board of Directors and president and CEO of Tanner Health System. Howard had served on a committee that searched for a successor to Jackson.

“Early in the process, the search committee identified several key traits we were looking for in a candidate,” Howard said in the release. “The ability to develop and execute Carroll Tomorrow’s vision for the community was at the top of that list.”

Howard added that leadership was also a very strong component of Handel’s selection. He noted that her guidance would be important to leading the organization forward, elevating Carroll County, maintaining existing jobs, and creating new opportunities.

Among the top stories of the new year in Carroll County was the January 5th runoff election for the state’s two U.S. Senate seats that was held on January 5.

The new year also saw a new president take office as Joe Biden took up residence in the White House in January after he narrowly defeated President Donald Trump in the November 2020 nationwide election.

However, Biden was not the choice of the vast majority of local citizens who cast their votes for Trump.

Election reform was a major topic that generated diverse and conflicting opinions during the the 2021 session of the Georgia General Assembly in Atlanta, and local State Senator Michael Dugan of Carrollton was at the forefront of the legislation. He was a co-sponsor of the the all-encompassing Election Integrity Act of 2021, originally know as Senate Bill 202 of which Dugan was also a sponsor, that was signed into law on March 25.

The new law mandated voter ID requirement on absentee ballots, limited the use of absentee ballot drop boxes, expanded early in-person voting, made it a crime for outside groups to hand out free food or water to voters eating in line, and included several other new mandates.

City council elections in Bowdon, Carrollton, Villa Rica and Whitesburg were held on nov. 2. Brett Ledbetter won another term on the Carrollton governing body, while Jan Johnson was returned to office in Bowdon.

Whitesburg saw several posts up for re-election. Incumbent Mayor Amy Williford won another term in office as did commissioners William Smolar, who faced no opposition, and Lucy Gable who defeated Jessica Davis.

In Villa Rica, Ann McCoy outpolled Michael Young who won in a 2019 special election the seat of Gil McDougal who ran for mayor, and Danny Carter defeated Dominique Conteh.

In other major news on the local front, Tanner Health System provided more than 1,000 doses of COVID-19 vaccines on March 10 to staff from schools across Carroll County.

However, Tanner Medical Center in Carrollton just recently reported seeing high numbers of COVID-19 patients even as the Pfizer and Moderna vaccine rolled into the health system.

Amanda Ressler, a substitute teacher, was arrested on Feb. 5 and appeared before Carroll County Senior Magistrate Judge William Brewer for her first appearance following a arrest where she was charged with 19 counts of child molestation, one for each student involved, in an incident at Mt. Zion Elementary School. The 31-year old was later indicted and remains in custody at the Carroll County Jail as she awaits trial later this year.

Both the Lady Lions of Central High School and the Lady Braves of Heard County High claimed state softball championships in their classifications on Saturday, Oct. 30. For Heard, it was the school’s second consecutive title.

Also the Carrollton Trojans boys’ track team won their 28th state track championship on May 15 in a meet held at Grisham Stadium.

The church, founded in 1851 by Rev. John Thurman, was known for its annual Memorial Day event. The building destroyed was the third sanctuary to have stood on the site and was built in 1986, according to the Historic Rural Churches of Georgia website.

Six County and Carrollton Fire Department fire trucks transported about 6,000 gallons of water to put out the raging flames.

The church cemetery, however, was undisturbed by the fire or gallons of water used by firefighters.

The flames were under control after about 30 minutes of fire units arriving on the scene, but could have been under control quicker if the church grounds had a source of water, authorities said.

No one was reported injured in the fire.

Authorities say the church building had no electricity or gas installed, and there were pristine weather conditions at the time of the incident, all factors the rule out an accidental fire.

The Georgia Arson Control Hotline offered a $10,000 reward for any information that could lead to the arrest or conviction of the person responsible for the arson.

At the end of March, a midnight tornado tore through downtown Franklin bringing down trees, power poles, and scattering debris.

Melinda Brown, president of the Heard County Chamber of Commerce, said that the recovery was done quickly as everyone worked together.

“It was really scary,” said Brown. “But, through an “outstanding” team effort involving practically the entire town, the clean-up effort was completed “very quickly.”

Donations of food for families and workers came in every day, including a mobile kitchen from the Pine Mountain Fire Department as well as cleaning supplies from the Salvation Army.

Heard County officials said there we no injuries or fatalities reported as a result of the storm. But, after the surge through Franklin, the tornado cut a path to neighboring Coweta County, causing even more damage.

According to a published report in The Newnan Times-Herald, this was the first F4 tornado to hit in Georgia in 10 years and was on a path 6 miles long and one-half mile wide.