The city school system has had this program for over 25 years. Despite the pandemic last year, Carrollton City Schools was able to keep the tradition alive.

“It is very effective as we help over 800 students each year,” said Ryan Scroggin, Carrollton Upper Elementary School counselor. “We have just begun getting sponsors this year, but we have around 200 sponsors each year.”

According to city school administrators, last year’s sponsors ensured a wonderful Christmas for hundreds of families, and they are hoping that the same could be done this year.

Social workers and counselors have verified the families that will be involved in the program, and found them to be in need of assistance.

Therefore, sponsors will be provided profiles of their assigned families, including parents’ names, children’s names, ages, sizes, and special needs and wants.

However, city school officials said they do not expect the sponsors to meet all the requests a family may make. They said it is okay to only purchase items that they are most comfortable with and items that suit their budget.

Sponsors should then be prepared to contact their assigned families with any gift questions and to arrange delivery.

Counselors will help sponsors contact the families if they cannot reach them; however, sponsors are encouraged to call their families before the school system closes for Christmas break to ensure there are no issues with the contact information on file.

Sponsor forms are available on the school system’s website, and must be returned to Carrollton Upper Elementary School, located at 151 Reeve Drive, by Oct. 22.

For more information, contact Ryan Scroggin at CUES through email at Ryan.scroggin@carrolltoncityschools.net. 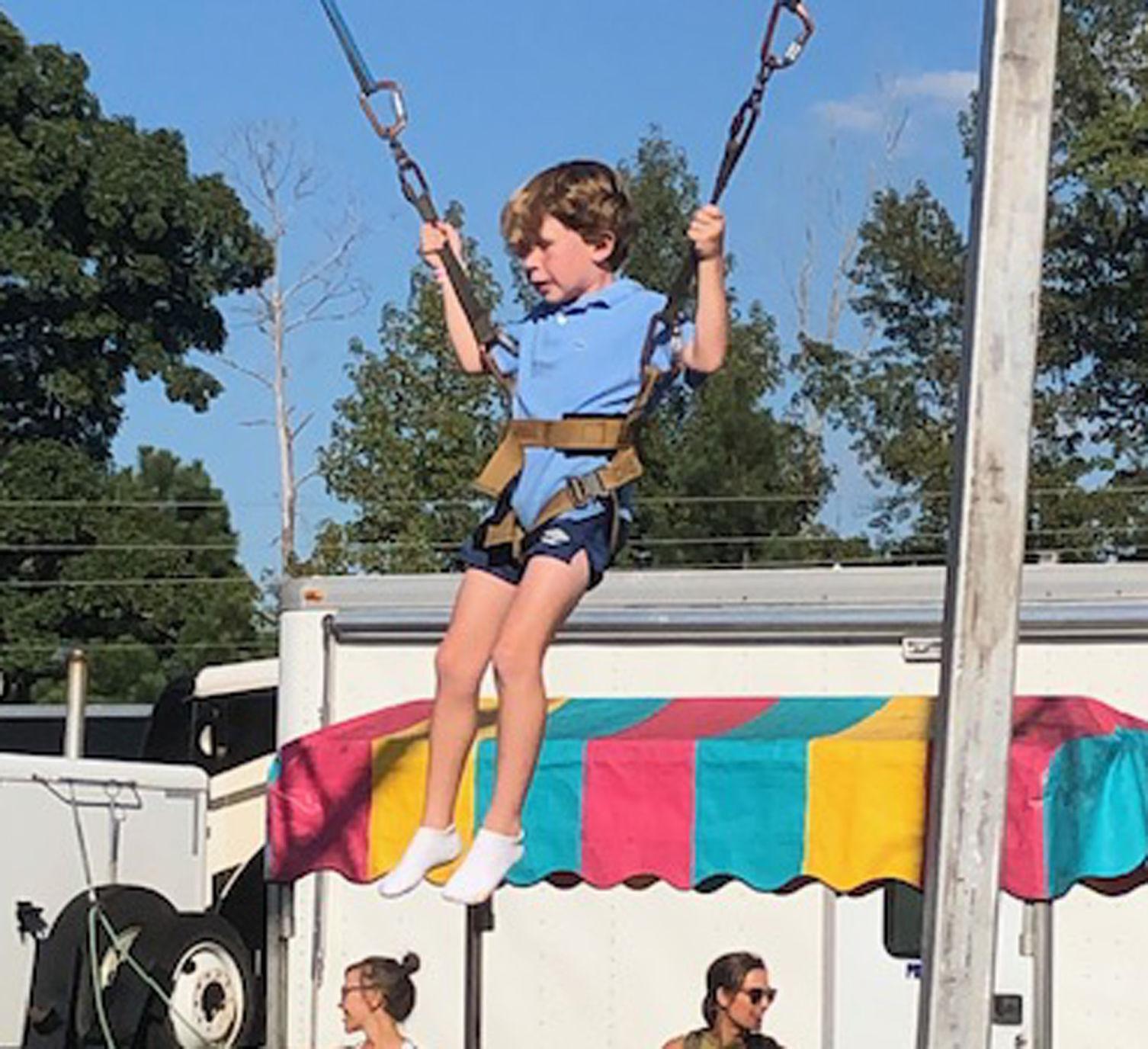 Lewis Vance of Carrollton, a first grader at Carrollton Elementary School, is enjoying his Monday afternoon at the Carrollton Fair.

The final days are approaching for the old Hubbard Slacks building.

At a special meeting last week, the Bremen City Council accepted a $123,000 bid from Southern Environmental Incorporated for the asbestos abatement of the iconic downtown building. The bid also included a $34,000 add-on to removed the roofing materials on another section of the building.

City Manager Perry Hicks was unsure how many companies bid on the project.

Southern Environmental was also the low bidder for demolition of the building, with a bid of $206,200. Six companies had bid on that project.

Abatement was scheduled to begin this week, Hicks said.

“They were here today on kind of a scouting trip,” Hicks said last Wednesday, after the meeting. “So they should start asbestos abatement [this] week.”

Also on Wednesday, the city held its third public hearing for a millage rate increase in Carroll County/Bremen and a tax increase in Haralson County/Bremen for those residents whose properties’ assessments increased. The city tentatively set the millage rates at 5.816 mills for residents of the Haralson County portion of the city and 8.591 for residents in the Carroll County portion of the city.

The 5.816 millage rate in Haralson County Bremen is unchanged from last year, but will result in a tax increase for property owners whose property assessments were increased, Hicks said. The property tax digest in that side of the city increased to about $1,435,941 after exemptions, which equates to about .066 mills.

The city, though, decided to maintain the previous year’s millage rate resulting in a tax increase. For a home with a fair value market of $100,000, that will mean an increase of approximately $2.64 over the rolled back millage rate of 5.75 mills.

The 8.591 millage rate in Carroll County / Bremen is an increase from the 8.417 mills that was levied last year in that portion of the city. For a home with a fair market value of $100,000 that will result in an increase of about $19.84 over last year’s millage rate.

As in the first two hearings, no residents came to the public hearing.

“I’d like to think people have confidence in our operations,” Hicks said of the reason for no attendance.

ATLANTA — The Georgia Department of Public Health (DPH) issued a release on Monday stating it “will follow the guidance and recommendations of the Centers for Disease Control and Prevention (CDC) and the Advisory Committee for Immunization Practices (ACIP) for COVID-19 vaccine booster shots.”

Those recommendations include that people 65 years and older and residents in long-term care settings “should receive a booster shot of Pfizer-BioNTech’s COVID-19 vaccine at least six months after their Pfizer-BioNTech primary series,” according to the release.

It also includes people aged 50-64 years with underlying medical conditions stating that those individuals “should receive a booster shot of Pfizer-BioNTech’s COVID-19 vaccine at least six months after their Pfizer-BioNTech primary series.”

DPH also states in the release that “people aged 18-49 years with underlying medical conditions may receive a booster shot of Pfizer-BioNTech’s COVID-19 vaccine at least six months after their Pfizer-BioNTech primary series, based on their individual benefits and risks”

Anyone in occupations that are at risk are also encouraged to receive the booster.

“People aged 18-64 years who are at increased risk for COVID-19 exposure and transmission because of occupational or institutional setting may receive a booster shot of Pfizer-BioNTech’s COVID-19 vaccine at least six months after their Pfizer-BioNTech primary series, based on their individual benefits and risks.”

DPH said they have begun administering booster doses at health department vaccination locations on Monday, and that there is currently an adequate inventory of the Pfizer vaccine and “will work to ensure accessibility to booster doses statewide.”

“DPH continues to stress the importance of vaccination for all Georgians aged 12 and older,” the release stated. “Vaccination is our best tool to protect lives and stop the spread of COVID-19 in our state.”

To find a COVID vaccination location, log on to https://dph.georgia.gov/covid-vaccine.

A 23-year-old man pleaded guilty last week to charges of sexual exploitation of children and was sentenced to 15 years in prison.

Alexander Marcelle Lee of Bowdon pleaded guilty to 15 counts of exploitation in connection with internet photos found on his electronic devices last July. On Sept. 20, Coweta Judicial Circuit Superior Court Judge Dustin Hightower handed down a sentence of 15 years in prison, to be followed by five years probation.

According to a release issued Monday by the circuit’s District Attorney’s office, Haralson County sheriff’s investigators received a tip in July 2020 from the state’s Internet Crimes Against Children task force that someone may be sending suspected child pornography over the internet.

The tip was then referred to Carroll County sheriff’s investigator Courtney Short, who determined that Lee might be a suspect in the case. When search warrants were obtained for Lee’s electronics and Facebook account, it was determined that 15 photos or videos of children engaging in sexual conduct had been sent from Lee’s Facebook account to another account.

The release said that after his arrest, Lee admitted to sending the child pornography, as well as viewing such images for over a year.

In the release, District Attorney Herb Cranford praised the sheriff’s office for its swift response in investigating the tip from the state task force.

“Although defendant Lee maintained that this was a victimless crime, every one of these videos and images involved a child victim of sexual abuse,” Cranford said. “The viewers of these images create a market for the images and incentivize their creation. Consequently, this office will seek justice for the victims of these crimes and prison sentences for those who possess child pornography.”