The remnants of Hurricane Sally could hit west Georgia as early as Wednesday evening, forecasters say, with potential flooding.

A flash flood watch is in effect from Wednesday afternoon through Friday Morning in Carroll County due to the hurricane, which as of Tuesday evening was still churning off the Gulf Coast.

Forecasters at the National Weather Service in Peachtree City said Tuesday afternoon that they were not expecting tropical storm force winds in the county, but are expecting heavy rains of anywhere from five to seven inches.

The forecaster added that the area of Georgia that is anticipated to be hit the hardest is the Interstate -85 corridor. But in Carroll County, residents can expect rain as early as Wednesday evening, and into Thursday evening.

The hurricane was anticipated to make landfall in Alabama sometime this morning, and will then move inland, weakening to a tropical depression.

Sally is expected to track through the Southeast, impacting Mississippi, Georgia, and the and the western portion of the Carolinas.

As of 5 p.m., Eastern Standard Time, on Tuesday, Sally had maximum sustained winds of 80 miles per hour and was moving at only two miles per hour.

Georgia Power and Carroll EMC are both preparing for the storm. If anywhere locally needs help, Carroll EMC will assist there first, a spokesperson for the cooperative said, adding that they still have crews assisting with the aftermath of Hurricane Laura.

Georgia Power is also monitoring the storm, waiting to determine where the need is most for assistance. Georgia Power has an outage map for its customers to track, housed within the Outage and Storm Center.

The power company is also reminding people to have an emergency kit, unplug major appliances and charge cell phones in case you lose power. During a storm, they advise taking safe shelter inside a sturdy building away from windows and doors, and avoid contact with conductors of electricity — appliances, metal objects and water.

Never touch any downed or low-hanging wire, including telephone or TV wires that touch a power line, Georgia Power added, and never pull tree limbs off of power lines yourself or enter areas with debris, downed trees or standing water, as downed power lines may be buried in wreckage or submerged in water or mud. 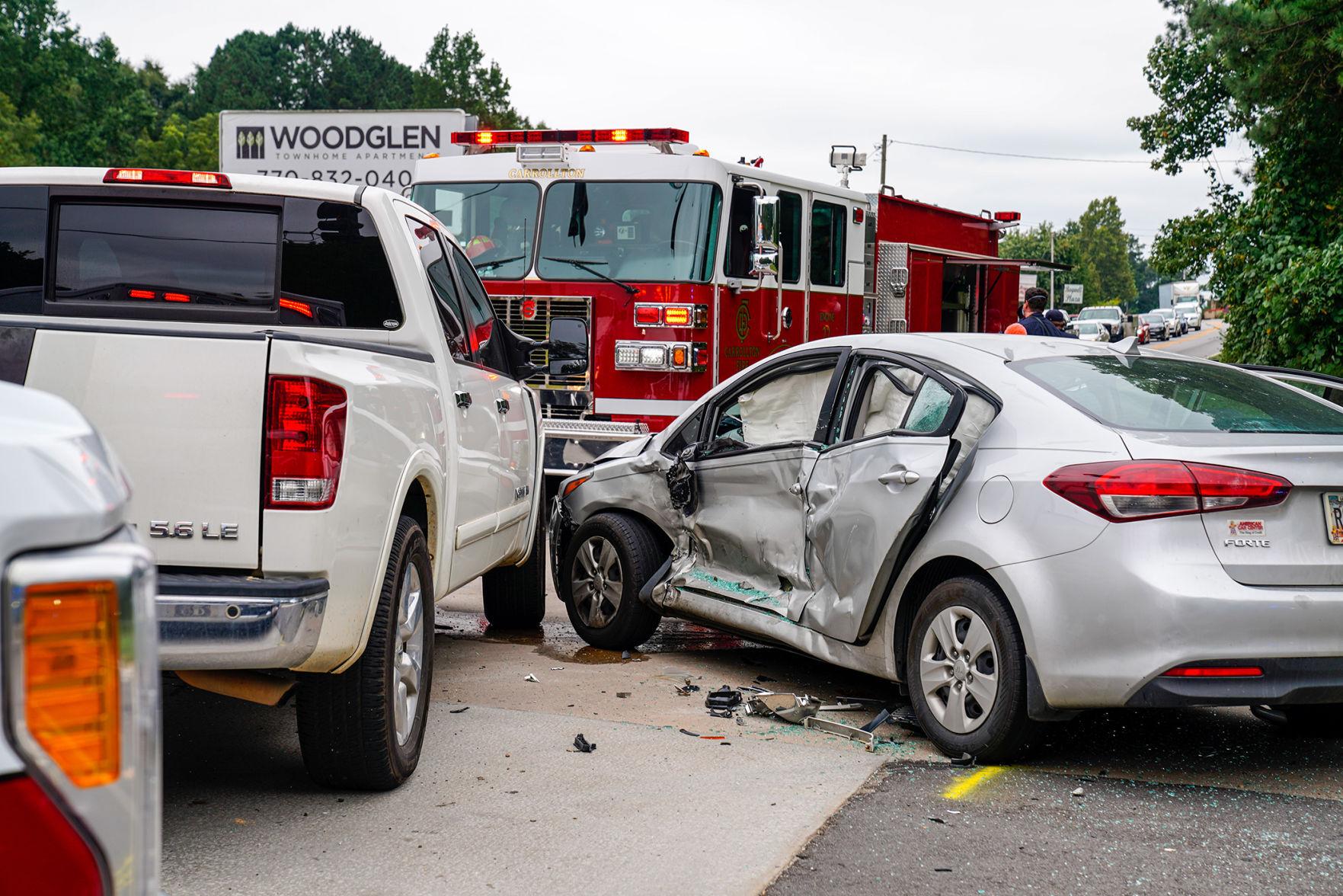 A two-vehicle accident occurred at the Columbia Drive and Beulah Church Road intersection in Carrollton on Tuesday afternoon. The accident resulted in two individuals receiving treatment for minor injuries, including a broken arm, according to officers on the scene. The crash snarled traffic around the intersection for a short time.

A patron parks their vehicle by the entrance to make a touch-free pickup at the Neva Lomason Memorial Library on Tuesday afternoon. The public will be allowed access to the library building starting on Monday.

Various books rest on shelves of the fiction section at the center of the Neva Lomason Memorial Library in Carrollton in July. The renovated library offers 96,000 books of various genres for all age groups.

The Neva Lomason Memorial Library in Carrollton will be open to the public on Monday.

“We are very excited to be able to welcome the community back to the gorgeous new Neva,” said Jeremy Snell, director of the West Georgia Regional Library System. “The author Jorge Luis Borges said: ‘I have always imagined that Paradise will be a kind of a library,’ and I feel that Neva Lomason definitely exemplifies that ideal for the Carrollton and Carroll County communities.”

The library has been closed for months while a massive renovation and expansion project has been underway.

During this week’s city council meeting, Mayor Betty Cason announced that the newly renovated downtown Carrollton library is scheduled to open its doors to the public within a week.

Snell said the public will be allowed to enter the building on Monday. Visitors will have access to the library’s 96,000 books and new features that include a dedicated computer lab, adult space, teen area, kids area, and study rooms.

Even though the library has been closed, it has offered online and phone assistance to check out books Monday through Saturday from 9:30 a.m. to 5 p.m.

This week, Snell said library personnel continues to complete finishing touches on the building before Monday.

The $5.3 million project was scheduled to be opened before the end of 2019, but Snell said additional modifications to the building had to be made. He added the project had cost $5 million so far in June, according to earlier articles.

The reopening of the library was also delayed due to the coronavirus outbreak and subsequent shutdown of area businesses, and the requirement that most people shelter in place to curb the spread of the virus.

In June, Snell said that new shelving for the facility had been late in arriving. That shelving was sourced through a state agency that was not allowed to deliver or install during April.

The building, which was originally built in 1967, had been renovated twice before, in 1976 and 1993. The recent renovation added 10,000 square feet to the formerly 18,000-square foot building, and some reconfiguration of the building, specifically the front entrances from the existing parking lot and Rome Street.

Bas-relief sculptures made by Carrollton artist Julian Harris are on the west side of the building.

Renovations did require expanding the footprint of the building, and the facility’s administrative offices were part of the first phase of construction and completed in May 2019.

Meanwhile, the Bowdon, Mt. Zion, Villa Rica, Temple, and Whitesburg libraries are open to the public, and each location is accepting returns and offers touch-free pickup.

News
City streets to be renamed for Dyer, Martin
By STEPHANIE ALLEN THE TIMES-GEORGIAN

At the age of 97, “Mother” Jennie Dyer passed on April 25, according to her obituary. She was an active community member known by many, and now just months after her passing, the street was renamed after her.

“Mrs. Dyer was the matriarch of a very fine family,” said city manager Tim Grizzard during the council meeting. “She was a strong person; a delightful person to be around.”

Grizzard mentioned that when the signs are changed, the city could hold a dedication if the family wishes.

Martin was a two-term mayor of Carrollton and at the time of his election, he was the youngest mayor in the nation. Martin was one of the founders of what became known as Martin & Hightower funeral home, which for years had been located on West Center Street.

A dedication will also be held when the signs on the newly named Stewart Martin Street are unveiled.

Both of the renamings were voted unanimously by the five city council members.

The property of Pelican’s Snoballs has been approved for a permit that would allow food trucks within the city.

A special use permit was approved during Monday’s City Council meeting for 401 Bankhead Highway, which is home to Pelican’s Snoballs. While the permit comes with a few rules, customers will soon be able to enjoy something to eat along with their frozen treats.

Harris said that he is glad that the permit was approved, and he said that as soon as food trucks fill out their own permits to serve on the property, they can begin to sell on the property.

Brett Ledbetter, Ward 2 council member, added the condition of having only one truck at a time on the property, but said that the topic could be revisited in the future. He cited concerns over limited parking space, as well as the fact that the property is already home to an established business.

“They can have a different food truck every day; that doesn’t bother me at all. I just don’t want us to put two out there, or three out there, and then all of a sudden we have traffic backing out onto Bankhead trying to get in the parking lot,” said Ledbetter.

Other conditions include that the food truck leave the property at night and that the permit has to be renewed annually.

Ledbetter added that at the work session later this week, the council will be addressing the cost of locating another food truck court in the city and plans to discuss a universal food truck permit.

Currently, food truck owners are required to have a permit for each location at which they serve. However, the universal permit would no longer require that for locations where food trucks are already allowed.